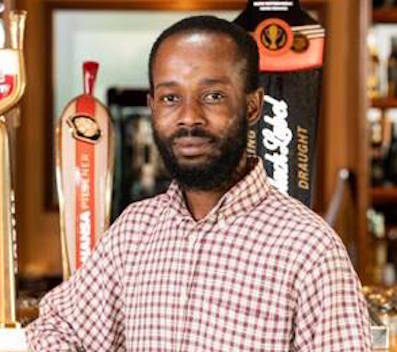 
Kgolane Jack Moruthane is a young entrepreneur who established Flight Mode Productions in 2017, playing in the media space by literally providing a new view of things. Moruthane’s aerial filming is certainly a new take on videography, capturing footage from the sky.

Through the use of commercial drones, the business captures the outdoors – whether it be agricultural landscapes, public events and experiences, for use in virtual reality scenarios or a catalogue of South African footage stock. Ultimately, Moruthane would like to create a drone hailing platform to host a network of drone pilots

“Drones have been around since the ’80s when they were used mainly in the military, but around 2012/2013 they become more common. Their popularity actually grew as a result of drones in the toy market,” Moruthane says.

With a background in IT, starting out as a distributor for servers and screens, Moruthane got together with some friends in aviation and they decided to look at drones more seriously and spent three years exploring and experimenting before launching Flight Mode Productions.

Its target market includes among others marketers, filmmakers, event organisers, journalists, private entertainers and area mapping experts. “Drones provide the advantage of flexibility, the range of shots is much greater, and it is affordable,” says Moruthane.

In terms of marketing, Flight Mode Productions, a 100% black owned business, is in its infancy relying on meeting people at conferences about drone technology, and networking. “Any marketing is premature as we are not licensed yet. For now, it’s about building relationships.”

Setting up can cost you up to R250 000 for your equipment and certification. “Getting the operator certificate takes a great deal of paperwork and before you can operate commercially you need to employ a few drone pilots and have several drone compliance assurances.” The flight laws require that you fly within the allowed aviation space and always have sight of the drone.

Kgolane currently employs two people and plans to subcontract up to 18 pilots by 2019.

“When you turn commercial, that’s when the fun starts.” Short term goals for Flight Mode Productions are to comply with aviation laws by acquiring a commercial Remote Operator Certificate (ROC) as well as to become certified with safety management and quality assurance qualifications.

One of the major advantages of drone technology is data collection. “Particularly in farming. Drones can cover hectares and hectares of land to gather information that would take days to do by other means. This makes the data available almost immediately.”

Moruthane plans to add artificial intelligence to the business offering as a way to develop insights around the data.

Further down the line, Flight Mode Productions has set its sights on a drone-hailing platform to host a network of drone pilots.

As an SAB KickStart Boost finalist, it seems that Moruthane has set in motion the first steps to partnering with SAB. The programme helps finalists find opportunities  to increase their market access, including helping them to connect with appropriate local stakeholders within their respective communities so that more people adopt their services and support their business growth.

In true entrepreneurial sprit, Moruthane believes all his ideas will materialise and his advice for other entrepreneurs is, “Success comes when you overcome all obstacles – fatigue, excuses, critique and regret. Success is believing in yourself to finish what you started. Take control of your own destiny.”

How drones are being used in media

1. Marketers are always looking for new ideas. With drones, they can create campaigns for products or businesses that literally stand above the rest. Drones take videos and photos to catch a consumer’s eye, and collect data too.

2. Content creation. Drones are so easily obtained by anyone that in many instances, you just need to learn how to work the drone and you can create content.

3. Drones can be used for aerial advertising, similar to the way airplanes were used to advertise at certain events. This is definitely a great way to get advertising across to many people in a certain area.

4. Marketers are using drones as a “wow factor” in many commercials, and even in films. Companies are using drones in their videos to get people talking. They have been used in several commercials for big named companies, showing that drones are capable of playing many roles, such as delivering items or packages to people.

5. Drones can gather data and integrate it for use in the marketing and advertising fields. A prime example is virtual reality experiences. The aerial footage will be taken with drones to give you a real feel while you are experiencing a different world. Laws and regulations are still being put into place as far as companies using drones for data collection.