Riding the slow wave: The upside to Cape Town’s gridlock 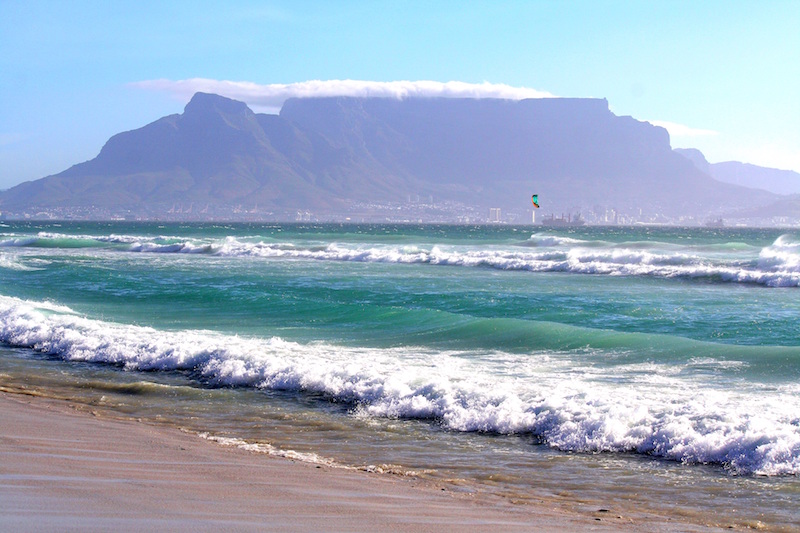 Outside of Gauteng, the Western Cape is a stronghold for media in South Africa, with a diverse landscape of newspapers, magazines, radio, and OOH.

My neighbour is a blogger and videographer. He’s just returned from Sri Lanka where, frankly, he just couldn’t eat another crab curry. He surfs during the day and works at night. Unless the swell sucks, in which case he works during the day like the rest of us. The difference is that he doesn’t spend a third of his waking day in traffic, and the most stress he’s forced to endure is some crowding out on the back line.

For the rest of us, this crowding takes the form of aggressive motorists vying for their space on our clogged roads. Drop in on the traffic stream and you’ll know all about it.

Cape Town’s highways have moved from cruise to ooze as we officially became the most congested city in South Africa with hundreds of thousands of cars making their way into the central business district (CBD) daily.

Ask someone in Cape Town about the traffic at your peril (and only if you have a lot of time to spare). Anyone who ever ventures out of their homes will regale you with tales of woe about the increased traffic on the roads and the length of time it takes to get anywhere. With in-migration more than doubling that of out-migration, it’s no surprise that Cape Town’s population is now estimated at 4 524 111 and has grown by 423 777 since 2015 (predictions suggest that we can expect a very crowded population of 7.36 million in the Western Cape by 2040!).

A huge contributor to the traffic is the bourgeoning Cape Town CBD, which has seen massive growth and promises an insane 35 developments in the pipeline. These include business, retail and residential developments, which will see a clutch of new skyscrapers changing the city landscape. One has to hope that stacked parking forms part of this planning as the city is practically bursting at the seams on any given day and just getting to town is a crawling, crushing, withering journey which tests the patience of the most zen among us.

Driving in my car

There’s an upside to this gridlock though – the amount of time we spend listening to the radio in our cars.

Capetonians spend an average of 3h18 listening to the radio, 24 minutes longer than their counterparts in Gauteng (Jan-Dec 2018 BRC RAM). The highest listenership peak still occurs in morning drive, however the daytime listenership curve is far rounder than that of Gauteng. In-car listenership behaviour is evidenced by the discussions that take place around the coffee machine, where we stagger to share horror stories of how the highway has become a parking lot.

The voice trend has found its way to radio with ease via the ubiquitous voice note and citizen journalism is alive and well on the clogged CT highways. The opportunity to wax lyrical and enjoy the anticipation of hearing one’s own voice on-air while driving seems to present thrilling appeal. Other than encouraging engaged listenership, on any given day we’re bound to know where a leopard toad may be crossing the road and which cavalcade dares to drop in on our traffic wave as we all inch our way around Hospital Bend.

Slow traffic is a joy to out-of-home media owners though, particularly in Cape Town where opportunities are scant and any chance to maximise exposure is a bonus.

Just ask Livia Brown, regional manager of Posterscope, Cape Town. The city continues to be a region where the number of OOH sites is limited in comparison to Gauteng and KwaZulu-Natal.

According to the latest State of OOH Report there are around 13 300 billboard sites in South Africa, 50% of which are located in Gauteng, 16% in KwaZulu Natal and 9% in the Western Cape (accounts 1 248 sites).

Cape Town may have fewer sites than Gauteng, she says, “but we also have the lowest number of blank sites, meaning more are sold than any other province (Source: Outdoor Auditors: State of OOH Report Sept 2018). This proves that OOH is alive and well in the Western Cape”.

Asked about the waves of change in OOH, Livia quickly notes the role of digital as a contributing factor.

“The OOH landscape in Cape Town has changed over the past few years with the biggest introduction and change to the landscape being Digital OOH in the Western Cape.

“Long had we envied the Gauteng landscape, abundant with digital roadside sites, but with the introduction of this format to the Western Cape we have joined the cool kids,” she says.

There are currently a total of 10 roadside digital screens in Cape Town and this number is set to increase this year.

There has also been developments in new formats and converting static sites to digital, such as seen in the forecourt space with scroller sites being converted to digital screens.

“We’ve also seen growth in the retail and mall environments on the digital front with new sites and formats being introduced.

“Posterscope is especially excited about this growth in digital OOH as this enables us to implement dynamic creative campaigns using LivePoster in Cape Town now too,” says Brown.

“LivePoster is the only platform of its kind in Sub-Saharan Africa with the capability to show changing components based on set triggers across several DOOH networks and media owners.

“Global results for campaigns where LivePoster has been implemented show a 20% increase in awareness and 50% increase in message recall when viewing dynamic digital OOH campaigns.”

The rate at which fibre is being rolled out brings with it feverish excitement, not just for consumers poised with popcorn to binge their favourite OTT platform, but also for advertisers in Cape Town. Along with increased connectivity comes greater opportunity to geo-target (to those previously less contactable owing to data limitations), which is hugely appealing for local business.

As fibre (and along with it free wi-fi) hits the Cape Town townships there’ll be greater opportunity to geo-target areas where billboards are located presenting the opportunity to translate OOH into a deeper conversation within the digital space. We’re already seeing wi-fi in far more taxi ranks than ever before so with consumers browsing this free wi-fi the opportunity to activate these audiences on mobile is definitely growing.

While the Daily Voice claims to “skrik vir niks”, Cape Town newspapers in general are likely to be a lot less fearless as circulations continue to slump.

Instant digital news, coupled with a good dose of aliteracy (where people are able to read but uninterested in doing so), is taking its toll on print readership in Cape Town. A micro view (quarter on quarter) is less alarming, but zoom out a few years to see the full, shocking impact. 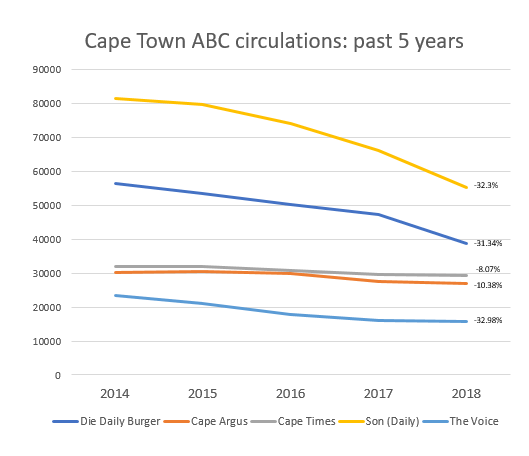 So, while the roads ahead remain congested the winds of change are certainly beginning to gust through the Cape Town media landscape and much like my neighbour, I’m very keen to ride this wave.