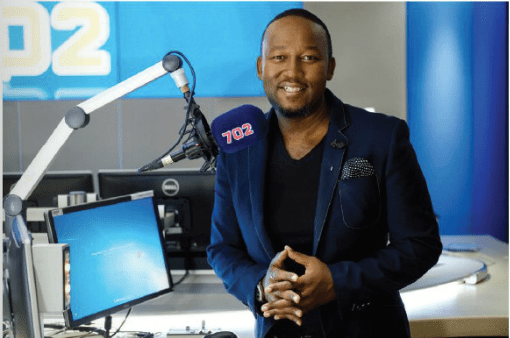 Is drive time radio still the most sought after, offering the appeal of mass audiences, which advertisers are seeking? Or has station listening blossomed throughout the entire day, slowly eroding the importance of these time slots?

“All important” is how Rivak Bunce, managing director of United Stations, describes drive time radio, arguing “this is where the bulk of the available radio audience is found, and this is what advertisers are after”.

“Morning drive, in particular,” he continues, “is where the character of the radio station is built. We depend on the drive shows to profile the station and to differentiate it from competitors… and build something that listeners and advertisers really care about”.

702 programme manager, Alastair Teeling-Smith, concurs, revealing that “a strong breakfast show and afternoon drive show is key to the success of our station”. Similarly, for music stations, Nick Grubb, Kagiso Media’s radio chief executive, calls the AM show (breakfast show) the “flagship show” with “PM drive forming the second ‘tent’ pole that props up the listening curve; the trick is to hold your audience as stable as possible through the day”.

The importance of drive time is underscored by ad investment data drawn from Nielsen’s newly launched Arianna Radio Post Campaign tool. This data is based on verified flightings, rather than station logs, and applies the standard rate cards of stations. Using November 2018 as an example, and focusing on the main broadcast hours from 04h00 to 22h00, the importance of drive time, particularly in the morning, is clear: it delivers 49% of total ad revenue (R839 124 210) across South Africa’s commercial and PBS stations, while only delivering 36% of the advertising ratings bought in that month. 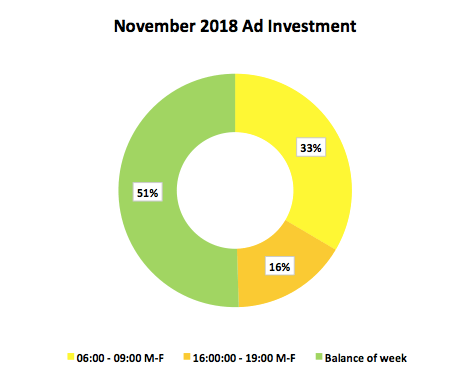 This is clear evidence that advertisers are not deterred by the loadings incurred by drive time. Coca-Cola Africa’s senior communications manager for connections planning at the company’s Southern and East Africa business unit, Jodie Bailey Norris, acknowledges that “rates are higher in these time slots than other times of the day”, but points out that they “offer a great opportunity to build fast reach within a schedule”, as well as the advantages of highly engaged audiences.

“Our ads during these times have been shown to deliver higher ROI,” she says.

Merissa Himraj, chief strategy officer at Wavemaker, calls drive time “a critical purchase” for a client such as Vodacom, saying it is “very important for retail campaigns and launching specific product campaigns… we are able to measure the correlation between radio and digital media… every time we run a radio campaign, search results increase – drive time radio does drive this very effectively.”

But she cautions that the cost and true value for money is “an ongoing balancing act as audiences remain static. We have seen some concerns around decreasing audience numbers, the drive time market is not expanding; in fact we see audience shifts between stations but no new audience growth as listeners choose to consume music differently through apps like Spotify and Deezer.”

Predictably, too, there is a strong correlation between the ranking of stations by overall audience size (measured by average daily audiences) and the size of their AM drive time listenership (measured by the average quarter hour audience). It is the SABC PBS stations, with their substantial footprints, which prevail here: 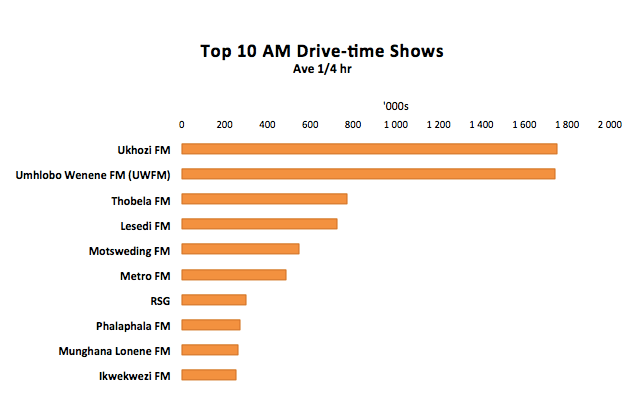 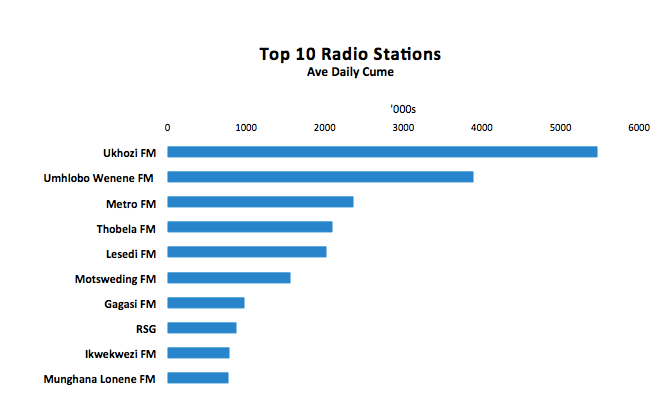 Their audiences may be impressively sizeable, but their listener demographics are less affluent than those of the metropolitan commercial stations; therefore, on a cost per thousand basis, they are priced considerably lower. Even an understanding of that, is little preparation for the line-up of the top ten breakfast shows by revenue. 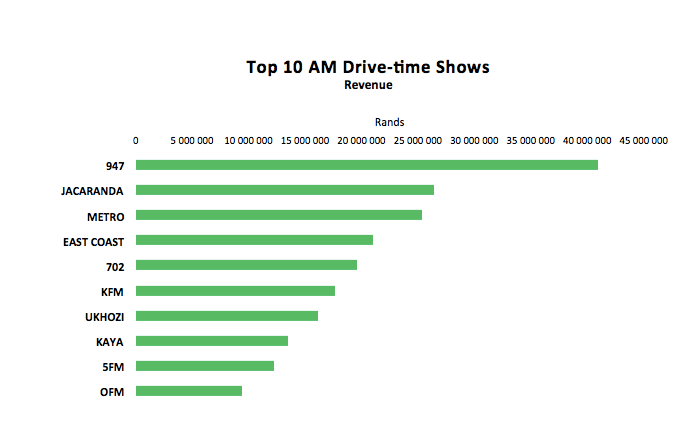 The regional commercial stations dominate this ranking, with 947 taking pole position, ahead of Jacaranda FM by some 55%. That these stations’ AM drive time audiences rank 14th and 15th respectively, is clear testament that advertisers value the affluence of the Place of Gold, in particular, and of metropolitan areas more generally. Of the three SABC stations which make the list: Metro FM, Ukhozi FM and 5FM (22nd in terms of audience size), two have a strong metropolitan focus.

Advertisers use the BRC RAM data to plan and buy radio. However, these surveys comprise six month rolling data, and are released roughly six weeks after the fieldwork is completed.

Looking in the rear view mirror

It is no surprise that Teeling-Smith likens programming a radio station on BRC RAM to “driving a car by just looking in the rear-view mirror… BRC RAM is a useful and important confirmation of successful programming decisions.”

Teeling-Smith says 702 pays special attention to direct audience feedback to the station via e-mails, SMS, WhatsApp notes and calls. “We also conduct research through online audience panels, focus groups and market studies. And we have a real time digital tracking tool that Primedia Broadcasting has developed, which monitors our various platforms and social media… to assist us (in) monitoring audience sentiment.”

From the same stable, Stephen Werner, programme manager of Kfm 94.5, stresses the importance of having this “collective view of using various data points available to the business and brands” because “any line-up change can affect listener loyalty or TSL (time spent listening) in the short-term”. He stresses that “music is still a key reason people listen to radio” but adds that “a successful show will provide a mix of music tailored for the target market, content, and information (traffic and news)”.

Grubb observes that “most music stations in South Africa elect to have a ‘star’ personality on air at (this) time… and they necessarily have a large direct following”. Successful drive time shows, he adds, “are packed with personality, traffic, weather and news information, discussions relevant to the day, and engagements with listeners like competitions and call-ins”.

Flying the flag for talk radio, Tessa van Staden, programme manager of CapeTalk, believes that “being LIVE and LOCAL is crucial”. In talk radio, she points out, callers’ contributions are key. “They co-create shows with us” and she highlights that “variety remains key. Listener fatigue is real and South Africans need to know what’s the latest, breaking news while also hearing good news stories and being exposed to interesting individuals as part of profile interviews”. Teeling-Smith reckons “radio listening is a habit. Listeners get used to presenters on shows and they become familiar with them”.

Line-up changes always have an impact, opines Jonathan Lumley, promotions manager for East Coast Radio and Jacaranda FM. “Changing a presenter, particularly in a drive time position, (means) you will have a period of time where the audience will listen into and choose to enjoy and accept the new show,” he says. Fortunately, he continues, “revenue is seldom affected in the early days as campaigns are booked weeks and months in advance”.

Any commercial radio station is keenly aware of what their client needs as an outcome for their booked campaign. Lumley points out that while clients are usually notified of changes in line-ups, it is rare that a campaign is pulled because a client or agency didn’t feel there wasn’t a “fit” for their brand. An effective programming manager will ensure “a new presenter is merely an evolution of the brand and the reflection of its audience”. Moreover, commercial stations are unlikely to take any risks. As Lumley puts it, “the type of individual who is employed to host these shows has a tried and trusted track record to deliver on engaged audience numbers and is usually known in the market”.

In Teeling-Smith’s view, a new host is expected to deliver an increased audience over time. He references the 702 breakfast and drive line-up, which has experienced change due to retirement, resignations and illness over the last three years, but says the line-up is now stable with Bongani Bingwa taking over breakfast at the beginning of 2018 and Joanne Joseph in charge of afternoon drive in the second quarter of last year. These new shows, together with the rest of the line-up, have “resulted in 702 growing its audience very satisfactorily”.

Similarly, Grubb cites Jacaranda’s newest show (18 months), Breakfast with Martin Bester, as “already delivering audiences on par with the most successful prior shows on the station, and the show is growing every diary so far”.

Commercial stations may be risk averse, or in Bunce’s description “highly researched and sterile”, while community stations may be more experimental. Arguably, given his track record with advertisers and listeners, Hot91.9 FM bringing in “a rejuvenated Jeremy Mansfield, united with Sam Cowen” was not that much of a gamble. Bunce cites Mansfield as “probably the best example in the country of the magnetic force a drive time show can have on revenue and audience building. He has a massive ‘impact’ factor with his ability to touch people on a much more intimate basis… A drive time show like this is part art, part science and part magic, but it really spells revenue and audience”.

While Himraj points out that “competitions, features, station promotions, sponsorship, events and branded content deals are all ways to get better value” out of the medium, it does not look as if advertisers or listeners will be forsaking drive time any time soon.