First on TMO: Bursary students learn from the research pros at #PAMRO2019 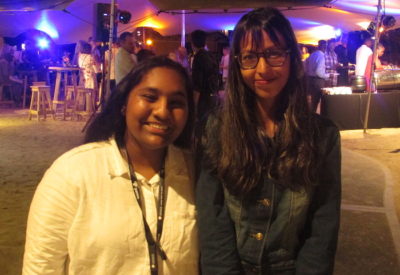 
It was two days to remember for Ashwinee Rajkoomar and Shameema Peeroo. The pair not only sat in on the presentations at this year’s Pan African Media Research Organisation (PAMRO) conference, but also had the chance to meet and network with experts and leaders in their chosen professions.

Rajkoomar and Peeroo were the recipients of two media-studies related bursaries, worth $2000 each, given by PAMRO as an example of the body’s commitment to ‘paying it forward’.

With this year’s conference currently taking place in Flic-en-Flac, Mauritius, PAMRO was on the lookout for two worthy Mauritian students, and Rajkoomar (Middlesex University Mauritius) and Peeroo (Curtin Mauritius) fitted the bill perfectly.

From science to media and advertising

The world of media, advertising, public relations and media research is not too familiar a ground for Peeroo and Rajkoomar, as both students actually started working towards science degrees before switching to this field.

Asked why the change, Peeroo explained: “I was always keen for things like culture and literature, but I never got the opportunity to do it in high school, but now I want to pursue that as my career.”

Rajkoomar had similar sentiments. “I love writing and taking pictures. I would take pictures all the time, but I didn’t think of it as a career. But when I went to university, I saw the course and I thought ‘this is exactly what I want to do’.”

She is currently studying advertising, public relations and media, while Peeroo is working towards a degree in mass communication, specialising in journalism and web media.

But the switch from science to media was not the only thing the duo has in common. Their belief in hard work, perseverance and determination to achieve something of worth has led them to academic success and winning these bursaries.

So where do the young women see themselves going in their careers? Rajkoomar wanted to make movies, but has now taken an interest in short-form video content, so is eyeing working in a video production company.

Peeroo has her eyes firmly set on a move to Australia with a career in the world of publishing, hinting at writing for magazines.

Biased media and the role of social media

Ending the conversation, Peeroo pointed to a worrying trend she had observed in media, the fact that at times it is quite biased. She cited the fires in the Amazon rainforest as an example, which she believes have not been covered extensively by media.

“You have stories that do not deserve much attention, but they are getting more attention, so I think that has to change, to get more newsworthy stories, so people can really rely on the media that they are getting, because media is an influencer and you have to be a good influencer, and not cover only one side of stories,” she elaborated.

Michael Bratt is covering the PAMRO conference in Mauritius as a working guest of the research organisation.