Fresh vigilance is needed to protect media freedom across Africa 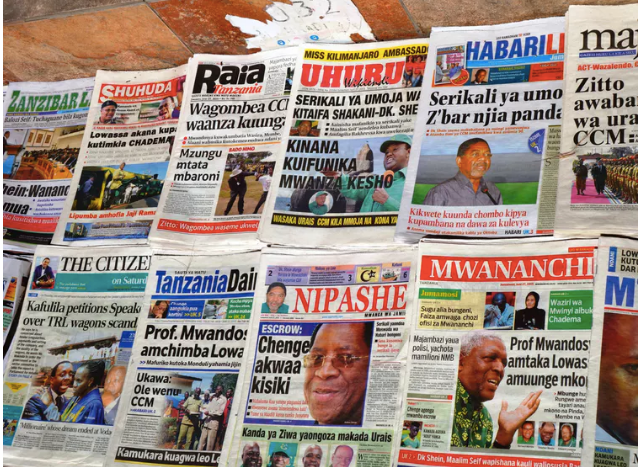 Newspapers in Swahili and in English in Dar es Salaam. The media is increasingly not trusted in Tanzania. Shutterstock


One of the least enviable tasks of journalists in the US must be reporting on how the public trusts their work less and less. A 2018 study found that only about four in 10 Americans had at least a “fair” amount of trust in the media. Also, in a June 2019 survey, a full third of respondents agreed with President Donald Trump that the news media are “the enemy of the people.”

The US isn’t unique in this respect. A study last year by the Reuters Institute and Oxford University found that, across 37 countries, trust in the media stood at only 44%. Countries that had particularly abysmal scores included Hungary, Greece and South Korea. And in Africa new data suggests citizens’ support for press freedoms is in sharp decline.

This news isn’t just bad for journalists’ self-esteem. Erosion in public confidence in the media could embolden leaders with autocratic tendencies. It could also provoke violence against journalists, limits on freedoms of expression, and an undermining of democracy more broadly.

Afrobarometer, an independent African research network, has been tracking African citizens’ attitudes on political, economic, and social issues since 1999. Its latest round of surveys, conducted between 2016 and 2018, included more than 45,000 respondents in 34 countries.

Most say they support democracy. But there are indications that confidence in institutions like elections and the media might be declining.

In surveys conducted between 2011 and 2013, a majority (56%) of people interviewed in 31 countries supported the media’s right to publish any views and ideas without government control. Only 39% said the government should have the “right to prevent the media from publishing things that it considers harmful to society”.

But in the intervening years, support for media freedoms has declined sharply. The most recent survey showed that only 46% supported press freedoms; 49% favoured some government censorship.

This marks the first time that Afrobarometer has found government restrictions to be more popular than media freedoms.

These declines are not limited to a few countries. Echoing trends elsewhere in the world, nearly every country in Africa has seen sharp declines in support for press freedom in the last decade. The biggest drops were in Tunisia (-21 points), Uganda (-21), Cabo Verde (-27), and Tanzania (-33).

These responses suggest that people are reacting to many of the same changes in media environments that are causing disenchantment around the globe. These include increasingly partisan outlets, social media that facilitate the spread of hate speech and “fake news”, and politicians who find it increasingly easy to downplay critical reporting by making reporters themselves targets.

Across much of Africa, journalists and other media practitioners are finding it increasingly difficult to work. Governments in Uganda and Tanzania are enforcing new restrictions on media.

In addition, full and partial shutdowns of Internet and social media are becoming increasingly common. In 2019 such shutdowns occurred in Benin, the Democratic Republic of the Congo, Ethiopia, Sudan and Zimbabwe. Chadians went without social media for 16 months before services were restored in June 2019. The government of President Idriss Déby, who has been in power since 1990, claimed the shutdown was necessary because some were using the Internet for “malicious purposes.”

Many of these countries have had broader problems with a lack of democratic accountability. But even Ghana, perennially rated as one of the continent’s most democratic countries, has seen serious threats to press freedom recently. In June 2019, two journalists – Emmanuel Ajarfor Abugri and Emmanuel Yeboah Britwum – were arrested, apparently due to their reporting on a powerful government minister.

Declines in support for press freedoms are concerning. Increased support for government limitations on media doesn’t suggest that there is broad popular sentiment favouring Internet shutdowns, closures of television stations, and violence against journalists. And it does not mean that people in Africa generally support returning to the days of state-run monopolies of broadcast outlets and the heavy-handed censor’s red pen.

But it’s imperative that African leaders are called to account for any encroachments on media freedom. While rhetorical attacks on the press by leaders like Trump, Brazil’s Jair Bolsonaro, the Philippines’ Rodrigo Duterte, and Poland’s Andrezj Duda have received attention for stoking popular vitriol against journalists, these leaders are also taking advantage of deeper and long-evolving declines in popular support for the media.

In some African countries threatening words too often turn into action. Examples include Uganda’s “social media taxes” intended to squelch opposition voices, the teargassing of newsrooms in Zimbabwe, the criminalisation of reporting certain kinds of content in Burkina Faso, and impunity for violence against journalists.

A failure to denounce these actions could – even unwittingly – contribute to dismantling one of the most essential underpinnings of democracy: a free press.