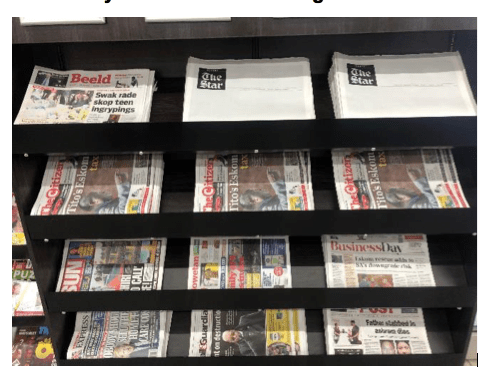 [PRESS OFFICE] No news may be good news but when the country’s most widely read daily, Johannesburg’s The Star, hit the stands with a blank cover on Wednesday 24 July 2019, the town talk went wild and rumours ran amok.

Luckily the simple explanation was our media campaign under direction of deputy media director Michael Pearce to launch Japan Tobacco International (JTI)’s independent research about the inefficacy of unbranded, plain cigarette packaging, with a deft and first-ever execution which eloquently synergised medium and message.

Replicating The Star’s front page as an unprinted wrap topped by a gloomy black and white masthead to replace its iconic red – something that had never been done before – the potentially disempowering impact of censorship was graphically illustrated and unmistakably communicated using the inherent topicality and credibility associated with newspapers – and the front page in particular, Michael explains.

“We wanted our media execution to be highly effective in directing The Star’s readers to JTI’s consumer research findings about the South African government’s proposed Tobacco Bill which aims to introduce plain packaging for all cigarette boxes to discourage smoking despite international evidence to the contrary.

These findings were published as a four-page spread wrap and our client wanted to ensure that readers are empowered with the facts so that they could critically analyse the real socio-economic implications of such far-reaching legislation, including loss of tax revenue as a result of increased illicit cigarette trading, and whether this offered the best course of action to change smoking behaviour.”

The Star was chosen as newspapers in general are still considered the most trusted information source which would therefore inherently underpin the credibility of the research.

“As a daily The Star also offers a good spread of readers with a good duplication across multiple national titles, therefore people who read these other titles also read The Star thus providing us with an excellent and highly cost-effective platform to build exposure into many of our key segments. Focusing on Gauteng gave us the biggest impact for this type of execution as other regions are supported with tactical strips and digital but budgetary constraints allowed us to only do a single wrap execution.”

Using the medium to tell the story so that it becomes a part of the creative execution and allows the message to become optimally relevant and impactful, is at the heart of Mediology’s strategic approach, Michael believes.

“In this case, were the client wanted to get maximum exposure for their content without budget for four-page inserts in multiple publications, we needed to come up with an execution that would be unique enough to stand out and create greater awareness and hype than a few standard inserts would achieve. Thankfully the client was equally enthralled with the Mediology vision and idea and went as far was supporting us by getting global headquarters to sign off on the concept.”