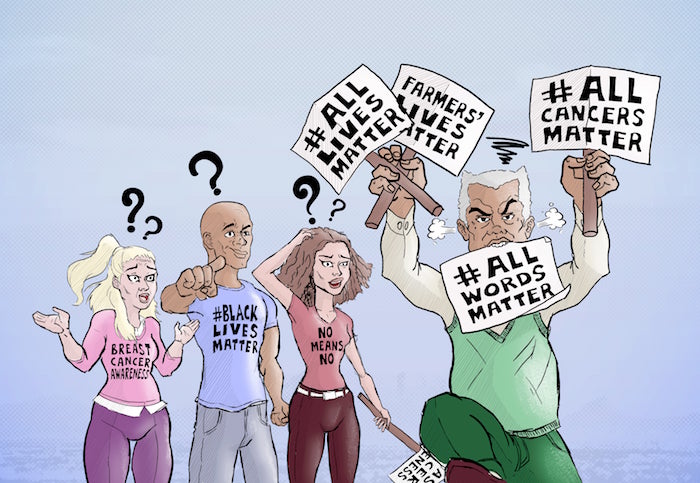 Black Lives Matter doesn’t denigrate the worth of other ethnic groups. It’s objective is to highlight long-standing systemic racism and the violent subjugation of specific races.

The growth and cascading momentum of the Black Lives Matter (BLM) movement, as well as the collective demand for change, is now often accompanied by people complaining that the term is incorrect and not inclusive.

As a result, we’ve seen the surge of ‘All Lives Matter’ (#ALM) and ‘White Lives Matter’ (#WLM), which are criticisms of the very idea of ‘Black Lives Matter’ (#BLM). What about farm murders, some have asked? Others, like former Proteas cricketers Pat Symcox and Boeta Dippenaar, attacked Proteas fast bowler Lungi Ngidi saying #BLM is a communist plot. Why are these counter-statements so tone deaf?

The #BLM movement has fought to be heard since 2013 and the main messages are to end police brutality and systemic racism towards the black community. #ALM and #WLM take this message and make it seem as if it’s saying black lives are more important than any other life.

However, #BLM is pointing out the need to recognise that not all races are being treated equally and that this needs to end. #BLM is looking to bring solutions and justice, while All Lives Matter or White Lives Matter are an excuse for people to not have the right conversations about racism, as uncomfortable as they might be.

If a house is on fire and firemen put the fire out, can the neighbours claim that their house also needs dousing? Naturally, the other houses are not on fire and do not need attention.

If people do not understand the meaning of the movement, it’s important to challenge them, particularly those who choose to silence this message and look past the problems systemic racism has brought to the black community because, for them, it’s a more comfortable space.

Brand communicators have an important role to play to ensure that the brands we represent smartly position themselves and make statements and contributions that drive change. Apple’s Siri and Google Assistant have both been programmed to rebut the question “Do all lives matter?” and Sony took a strong stance on social media regarding the importance of not being silent during the movement. This kind of response happens when brands understand the power and influence that they have and how important it is to be on the right side of history.

Black people should be afforded the same freedoms as any other race, and recognising injustice is at the heart of the #BLM movement. All lives can’t matter until #BlackLivesMatter.

Gimo Sousa De Jesus Manungo is a community manager for DAN Mozambique. He graduated with a bachelor’s degree in strategic management from Ritsumeikan Asia Pacific University in Japan in 2016. While at university, he attended various business case competitions, earning several awards in Japan and Hong Kong. In his free time, he goes to the gym and watches movies, and he recently took up trading as a hobby.