Visualising the social media universe in 2020 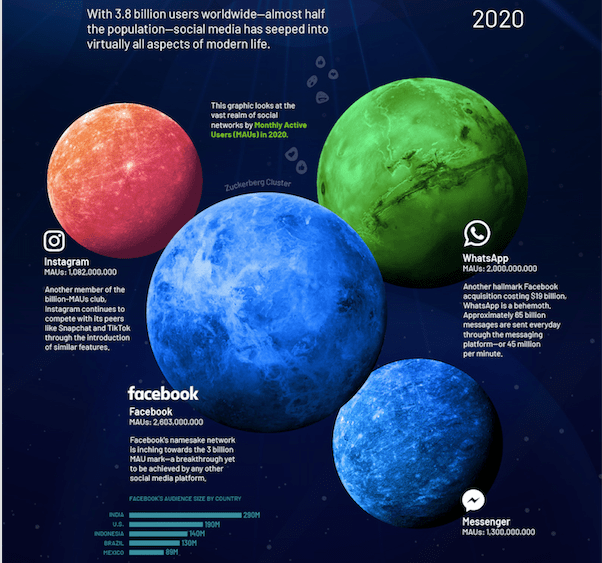 Visualisation of the social media universe as planets/Visual Capitalist

With an additional billion internet users projected to come online in the coming years, it’s possible that the social media universe could expand even further.

How the networks stack up

To begin, let’s take a look at how social networks compare in terms of monthly active users:

Here’s a closer look at individual social platforms, and their trials and tribulations:

To put it mildly, Facebook has had its hands full. A flurry of companies are boycotting Facebook’s ads, while the platform struggles to fend off the spread of misinformation.

Yet, its stock price continues to advance to new highs while the traditional economy faces less than rosy forecasts. Facebook still possesses the largest cohort of users, inching closer to the 3 billion MAU mark—a breakthrough yet to be achieved by any company.

Snapchat and founder Evan Spiegel have had a bumpy road since their IPO in 2017. The stock price reached its nadir near $4 in 2018, reflecting investor concerns tied to the introduction of Instagram Stories. In recent times, the stock has advanced past the $20 mark, although there is still long-term unclarity around monetization and profitability.

YouTube competes head on against traditional television and streaming programs for eyeballs. The platform raked in revenues of $15.1 billion in 2019, nearly double their figures in 2017.

The biggest social platform in China, WeChat has flourished, now holding a whopping 1.2 billion MAUs. As part of the Tencent Holdings conglomerate, they belong to the BATX group that is seen to lock horns with America’s Big Tech.

There have been whispers of a Reddit IPO on Wall Street for some time now. While such an event has not yet materialized, Reddit’s success certainly has. With 430 million MAUs relative to 330 million in 2018, the company continues to attract a larger audience. The notion of community has taken on a different meaning in the digital age, and Reddit represents this transition with their ever-growing network of users.

Instagram has been vital to Facebook’s success, since its $1 billion acquisition in 2012. The platform attracts a younger audience compared to Facebook and it has demonstrated an ability to remain versatile, specifically by implementing Instagram Stories and Reels.

Busy schedules don’t seem to faze Jack Dorsey who has not one, but two CEO jobs in Twitter and Square. Twitter has been able to achieve profitability in the last two years, reporting net income figures of $1.2 and $1.5 billion in 2018 and 2019 respectively. They no doubt have their work cut out for them as they continue to combat fake news and similar controversies on their platform.

If any publicity is good publicity, then 2020 has been TikTok’s year. Headlines include privacy breaches with alleged ties to the Chinese Communist Party, a banning of the app by India Prime Minister Narendra Modi, and now, talks of a partial U.S. acquisition. Potential acquirers include leaders Microsoft, Twitter, and Oracle.

Despite the list of headwinds social media has faced, about half of the world is now on it—and there seems to be no end in sight for future growth.

How have companies with exposure to the social media universe fared in 2020 so far?

Widespread participation in social media comes with its fair set of problems. Some companies such as Facebook have found themselves in the crosshairs on both sides of the political spectrum. As concerns grow around privacy and data, social media will be front and center in shaping the future of government, business, and politics.

Only time will tell just how high user counts will reach. The long-term trajectory suggests there’s more room left in the engine. There are still parts of the world that are just beginning to possess the technological infrastructure for social media to be a possibility. It’s plausible future growth will come from that avenue.

If stock prices of companies linked to social media are of relevance, their performance this year paired with the fact that they are trading near all-time highs supports such a growth thesis.

Republished in accordance with the Creative Commons Attribution-NonCommercial-NoDerivatives 4.0 International Public License. This article is published in collaboration with Visual Capitalist.

Aran Ali is content strategist at Visual Capitalist, which uses powerful visual content to help investors and business professionals understand the world. Focusing on topics such as markets, technology, energy, and the global economy, Visual Capitalist is currently one of the fastest growing online publishers in North America.