Why Dawson’s Creek, in all its cringey glory, is the TV show 90s kids need right now 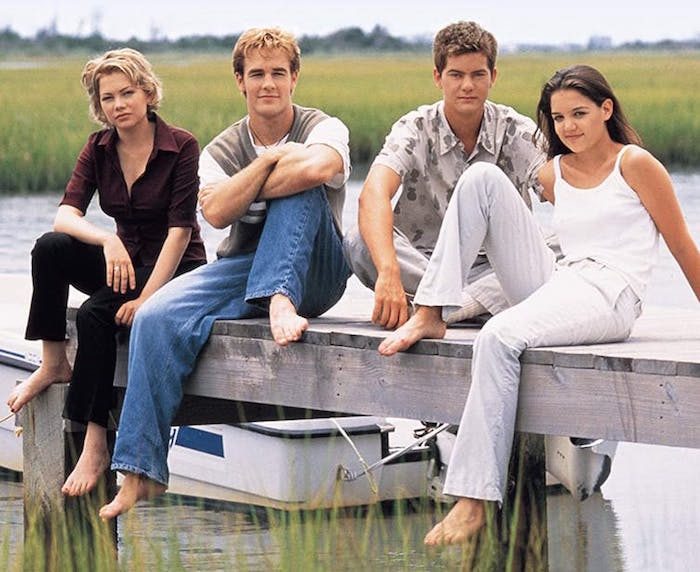 The 90s show Dawson's Creek, re-released on Netflix, taps into the current nostalgia for the past

In times of flux and crisis, nostalgia works like a social ointment, mixed and mashed together through imperfect memory.

Netflix’s re-release of Dawson’s Creek (1998-2003) is an ointment tailor-made for adults who were once ’90s kids. In the ’90s we were on the verge of adulthood, all the complexity of the teenage drama playing out on Dawson’s Creek titillating our adolescence. And now we’ve arrived, we want desperately to go back to our teenage years.

Dawson’s Creek was time of simpler politics, the beauty of youth and the innocence of virginity.

In the idyllic town of Capeside, Dawson Leery (James Van Der Beek) is a typical 90s all-American teen with a passion for film and popular culture. The series traces the complexity of Dawson’s close adolescent friendship groups, romantic relationships and the angsty problems plaguing teen life.

As for sexual tension, Dawson’s Creek flirted with it all – from the virginal girl-next-door Joey (Katie Holmes) to the sexually-mature out-of-towner Jen (Michelle Williams). And let’s not forget Dawson’s best friend, Pacey Witter (Joshua Jackson), whose tryst with a 36-year-old English teacher seems even creepier in hindsight.

Still, like all things nostalgic, our memories of Dawson’s Creek have to do with a longing for a golden age that never truly existed. COVID has enhanced these feelings of longing for a romanticised past: whether a golden age of bread-baking or through wearing “Mom jeans”.

We often return to familiar stories after a crisis. After the 9/11 attacks, American television and film emphasised strong role models of masculinity and the “cowboy” mythology. Americans were looking for a sense of security – a steely-eyed hero to swoop in and make everything OK again.

Dawson’s Creek brings us back to innocence and simplicity. Even if it was always just a fantasy.

In the summery Cape Cod town of Dawson’s Creek, teens are free to touch, embrace, love, and roam freely. And they certainly do all those things in spades.

Read more: In my end is my beginning: why TV streaming services love exploiting your nostalgia

A central tension of the series is the love triangle between Dawson, Pacey and Joey. While it brings all manner of tears and diatribes, Dawson’s Creek offers a micro-drama we know will eventually resolve. The only thing better than no problem is a problem we know can be fixed.

Returning to the creek

When the series streamed on the weekend, I jumped in and found Capeside exactly where I had left it: in unbearably pristine condition. But with fresh eyes, the cringe-factor was astronomical.

One of the great elements of the show, differing from others of its nature and era was the cadence of the dialogue. The writers clearly had no regard for how teenagers spoke.

In the first episode, Joey foreshadows the coming season’s narrative, telling Dawson “[…] our emerging hormones are destined to alter our relationship and I’m trying to limit the fallout”.

Re-watching as an adult, it feels exactly how a teenager wants to sound, but usually falls endearingly short.

I can’t recall making any quippy statements that perfectly articulated a meta-analysis of my own chaotic adolescent experience.

Then there’s the scene where the new English teacher, Tamara (Leann Hunley), meets Pacey for the first time at the video store and asks for a copy of The Graduate (1967). Clearly, the writers were not going for subtlety.

Dawson’s Creek brings with it a carnival of long-lost 90s moments: the posters on Dawson’s wall referencing Spielberg films; his job at the local video store; the cassettes and VHS tapes strewn around teenage bedrooms; the grunge-lite clothing.

Though our teen years comprise a small fraction of our lives, they often hold far more emotional weight. Psychologists theorise this is because of the impact of the often painful negotiation between holding onto the safety of childhood, and the dreams of emerging adulthood.

This negotiation marks these years with such force they stay imprinted in ways other decades do not.

During this time, there is also a critical relationship between the importance of popular culture and moments of identity formation. The art we grow up with imprints upon our psyche for life.

So perhaps I am not so much cringing at the show, but cringing at myself. Dawson’s Creek gives me a safe space to revisit my teenage years. Through remembering what I watched, I can remember who I was.

It is strange to watch the show now we know how it turned out – both on screen and off. We leave the crew as they leave the creek, trying to find their own feet in the world in their own burgeoning adulthoods.

Van Der Beek has had some minor success: he was impressive in The Rules of Attraction (2002) and pulled off some great self-referential television, playing himself in Don’t Trust the B Apartment 23 (2012–13).

Holmes had some great parts but never seemed to thrive in her acting career, while Jackson has shone in subsequent television roles. But it was Williams who became the breakout star. The youngest major cast member, she has been nominated for four Academy Awards.

Back in the day Dawson’s Creek offered us an escape – even if momentarily. And now, perhaps it has a similar function. In the turmoil of 2020, it is comforting to return to the fantasy of Capeside’s pristine community, where the biggest problem is who will Joey choose?