LATEST NEWS
Home Publishing All CEOs should read this

All CEOs should read this 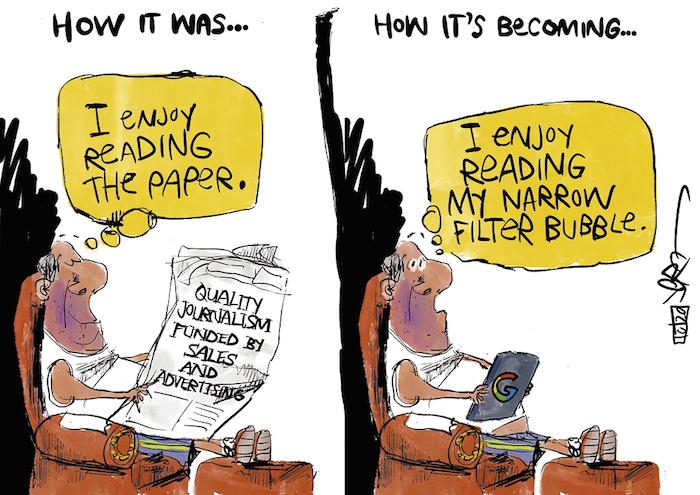 Corporates should include another ‘p’ in their marketing plans, to support proper journalism. This may well be the most effective way to protect our economy and corporate profits.

The current nosedive in economic activity in South Africa has hit many sectors with a sledgehammer. One of these is the media sector.

Several media owners – including major players such as Caxton, Media24 and Arena – have announced the closure of long-standing household publications and the retrenchment of large numbers of staff. These retrenchments include a large number of journalists.

Unfortunately, this is happening in a period where the media plays a critical role to hold corrupt government officials and their private sector participants to account. If not for journalists and committed South African publishers, these individuals and companies will never be held accountable, even if it is only in the court of public opinion.

There is no capacity, or perhaps political will, to investigate or prosecute these individuals. Admittedly, the Zuma administration destroyed the capability of prosecuting authorities to hold corrupt officials to account, but after more than two years under a new administration virtually nothing has changed.

If it were not for the independent and mainstream media, the current looting would be exponentially higher.

This weak and inadequate prosecuting performance also opened the doors of unprecedented levels of corporate fraud, as there is little fear of prosecution.

The pivotal role of journalists and publishers

The reality is that unprosecuted corruption has brought the South Africa economy to its knees and government finances to the edge of a fiscal cliff, from which the country cannot retreat without strong, decisive leadership and strong institutions reflective of a properly functioning constitutional democracy. We do not see this.

On the contrary, many of the alleged corrupt individuals hold senior positions in the ruling party. This caused the economy almost terminal damage. The result is record-low business confidence and investment, record-high unemployment, inequality and poverty.

However disheartening this may be, I firmly believe that journalists and publishers have played a pivotal role over the past decade in limiting the downward trajectory of the ethical and economic carnage we see today.

Without journalists South Africa would not have known about the arms deal scandal, Nkandla; ‘travelgate’; state capture; the Guptas; corruption at Transnet, Eskom, SAA, PetroSA, Prasa, Sars and the Public Investment Corporation; allegations against Ace Magashule; Covid-19 tender fraud; VBS; Bank of Baroda; Bosasa; the Estina dairy farm; the Life Healthcare Esidimeni tragedy; fraud at Steinhoff and Tongaat; the ongoings at Sharemax/Nova and Picvest; EOH; or Krion. The list is long.

In this context, the forced restructuring of media institutions, the introduction of paywalls which will limit mass access to investigative articles, and the imminent layoff of many experienced journalists will have a much more significant impact on society than their loss of income.

The reference to expensive does not relate to these journalists’ salaries, but to the trade of investigative journalism. It is the most costly form of journalism.

The complexity of the investigative journalism

It is the most costly form of journalism. The complexity of the investigations means some journalists take weeks and months to do the necessary research and investigations before revelations are made.

Such individual articles do not earn publishers any meaningful revenue and in most cases, are loss-making. Hence, such journalists are replaced with ‘more affordable’ young journalists, if they are replaced at all.

I have also put this scenario to many CEOs of listed companies over the past few months and every single one agreed with the importance of a strong, independent media and the role it plays to protect our constitutional democracy. The CEOs also generally appreciate the role advertising plays to allow journalists to execute this mandate.

It is also evident in the fact that many institutions financially support(ed) the South African National Editors’ Forum relief fund for journalists who have already lost their jobs – a decision most certainly taken by CEOs themselves.

But unfortunately, there is a structural problem in most companies’ decision-making structures, which limits the CEOs ‘appreciation’, to flow through to media spend.

Most companies’ advertising decisions lay with marketing managers, and these decisions are often purely based on the pillars of traditional marketing strategies to increase sales. If I can remember from my first-year marketing course, these pillars are the traditional five Ps of marketing: product, price, place, people and promotion.

I believe corporate South Africa should add another ‘P’ to their marketing strategies: to support proper journalism. It is not a philanthropic pillar. The watchdog role journalists play in South Africa contributes to the protection of our constitutional democracy and per definition the economy, and this is the economy all businesses operate in.

Without a growing economy, virtually no marketing strategy based on Ps will succeed.

It is a disgrace and demeaning that some of the most experienced journalists need handouts to survive.

It is also a disgrace that some of South Africa’s international philanthropic institutions financially support best financial journalists, and that some local companies have decided to exclusively advertise via Google and Facebook as it are cheaper. (These campaigns leave publishers with crumbs as the bulk of the revenue goes to the American giants.)

Corporate South Africa should support mainstream publications, to allow these journalists to earn their keep through their skills and to contribute to a stronger constitutional democracy.

This may well be the most effective way to protect our economy and corporate profits. Please discuss this column at your next board meeting.