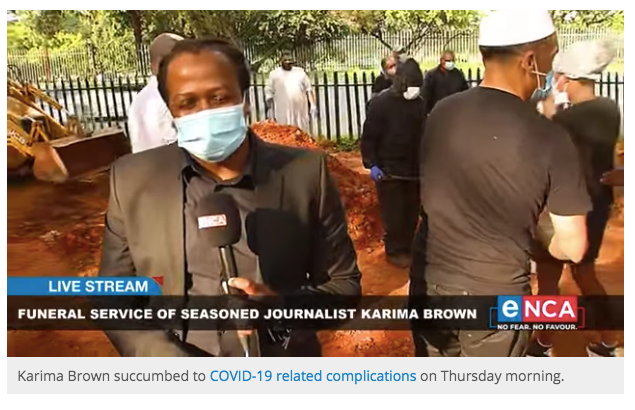 The headline broke at 9.07am yesterday. #KarimaBrown had passed away. Over 87 000 condolences poured out over the past 24 hours as the timeline shot up with the harrowing news.

The tears rolled down my cheeks after a friend called to tell me she had gone. I knew #KarimaBrown, not the hard-hitting controversial journalist the public knew, I knew her as a soft and kind woman that spoke to me most nights about the headlines, her sourdough bread recipes and the candles she lit for people across the world affected by Covid-19, sometimes we even spoke about Islam.

We bonded over the #StateCaptureInquiry mainly and our friendship flourished from there. Peter Bruce described her as “impossible and irreplaceable”, media called her a “veteran journalist” and a “tiger” who was relentless in her pursuit of “truth”.

This woman sued the EFF and #JuliusMalema for broadcasting her number and she won.  This was a huge win for journalists across the country.  No more intimidation, no fear or favour, that’s #KarimaBrown. I lost a friend who flooded my timeline with candles for those affected by #Covid19, the country lost a formidable force in journalism, a master and giant of her craft.  We are left with a vacuum. #RIPKarimaBrown, you strong, tenacious, fearless, magnificent woman; how will SA continue without your voice?

Some were shocked that the funeral was televised, I believe it was fitting for Karima; yes it was painful to be taken to the most personal of spaces, the grieving family laying her body in cloth in the ground. No fancy coffins, no pomp and ceremony, just earth to earth, to God we return. In her death, I pray that her wish for journalists to be considered frontline workers is filled and that our media voices are vaccinated as a matter of priority.

It is the anniversary of our first case of Covid19 in South Africa. how fitting that a woman who championed for South African lives all year, should die for her cause. I can’t stop crying.

Earlier this week the complete antithesis of #KarimaBrown made headlines. #LindsayDentlinger made it clear on live television that only black people should put on masks, apparently Covid is selective; I wonder what Karima would make of that? I also wonder if the irony is lost on Dentlinger, that by insisting that black people wear masks she actually protected them and left her white cronies exposed to the virus. The irony might be lost but the systemic racism in our country stands front and centre. When will we address this from the core?

#BiancaGoodsen teared up at #ZondoCommission and couldn’t help but smile when she spoke of #MarkPamensky’s shoddy CV. She spoke of McKinsey insisting on a BEE partner that resulted in Indian and Emirati appointments, not from our country though (broad interpretation of BEE guys).

This resulted in the gutting of our SOE, Eishkom. That’s what #BrianMolefe did. You’ll remember Brian, he is the guy who ran #Eskom for a bit and he was the origin of the term #SaxonwoldShebeen. He said he’d been to Saxonwold, not to the #Guptas mind, but “to some shebeen there”. He cried when we called him out and yet here he is in front of #Zondo and telling us that #Ramaphosa was a big part of #OptimumCoalMine, the controversial #Gupta deal that helped to debilitate #Eskom.

His testimony was given a few weeks back and he left us on that cliff-hanger.  This week when asked where he got the information about #Ramaphosa and Optimum, he referenced a media story; not a mainstream story written by credible journalists and carried across all media, no, a single story from a little-known source, perhaps he read it at a shebeen and maybe #BellPottinger was sitting across the bar?

I’m not sure one can use a single headline to damn a president. If we did, Brian, you’d be behind bars long ago having not-so-sweet tea with #JacobZuma.

Look I’m not saying it’s not true; perhaps there is a link between Ramaphosa and the Guptas. In fact I would be surprised if there wasn’t, but to put the President on the line with a little known headline is a stretch too far. Of course, the Advocate annihilated the #lifeOfBrian as he had to admit that the link was tenuous and that his role at Eskom was riddled with eyebrow raising questions.

#BhekiCele came out guns blazing (unlike at Nkandla), calling for cop killers to be returned dead or alive. That’s the #Cele we know and love; what was in that #NkandlaTea, Bheki?

Remember #Steinhoff, the greatest accounting heist in South African history? Well, it seems #MarkusJooste has been charged with fraud, not by the #hawks of course but by the Germans. The Hawks are yet to lay a single charge because apparently the case is “complex”. This guy, though, he was fined R122 million for stealing $6-billion and he won’t even pay that fine.

I wonder if you have to go to jail in Germany for fraud; this side of the waters, it’s a bit like jaywalking, a simple slap on the wrist and an optional fine will do. Let us never forget what he did: he robbed thousands of South Africans of their pensions. Where are you #BhekiCele? (Dead or alive?)

And then the chief exec of Steinhoff gets and double digit increase in his salary this week. Yes, #LouisDuPreez apparently works so hard we can’t even quote his salary in Rands because there are too many zeros. We use Euros now as his salary increased to EUR13.3million a year. Nice work if you can get it especially as there’s no consequences if you steal more.

#ZaneKillian appeared at court with a T-shirt that read #NotGuilty written in marker pen and “God knows the truth”. Please can we leave God out of a gang war, Zane? To remind you #CharlKinnear, a top cop, was shot dead in his car last September. Killian is accused of being the cop killer.

#BusisiweMkhwebane is finally on her last string at the National Assembly as the NPA’s case seems water tight. Their case shows her work as riddled with incompetence and deliberate errors for ill-gotten gain. Mkhwebane faces impeachment and removal proceedings by the National Assembly.  She does make a fine tale as our #publicprotector. How did we go from #ThuliMadonsela to #Mkhwebane? Oh yes, that was #uBaba again. By the way, when is he getting arrested? I’ve heard he has until 8 March to respond but a hard deadline of 25 March… #Bheki, are you there?

#RichardMdluli doesn’t appear in court again. This is the third time. They issued a warrant of arrest for a man who is already in jail. What does that even mean? He’s apparently sick, you see. Must be the #Shaiks, but he is in jail guys, send a phone down with a Zoom link. This story baffles me beyond.

The Chief Justice got a slap too this week as #Mogoeng was found guilty of his pro-Israel comments. You’ll remember he forgot or didn’t know that some Palestinians are Christians too.

In other news, there’s a #FakeCovidVaccine doing its rounds. Interpol says the bust in Germiston was just the tip of the iceberg, while South Africa says its an isolated incident. Is nothing sacred, guys?

I leave you with a lesson learnt this week: nothing matters but your health and those you hold dear to you. This life is short and complicated; don’t get bogged down by the big picture. Please love your circle and tell them that you love them. While you are there spare a little prayer or positive thought for #KarimaBrown, a friend and a legend. #RIPMamaKarima