Lessons on building a successful career in broadcasting 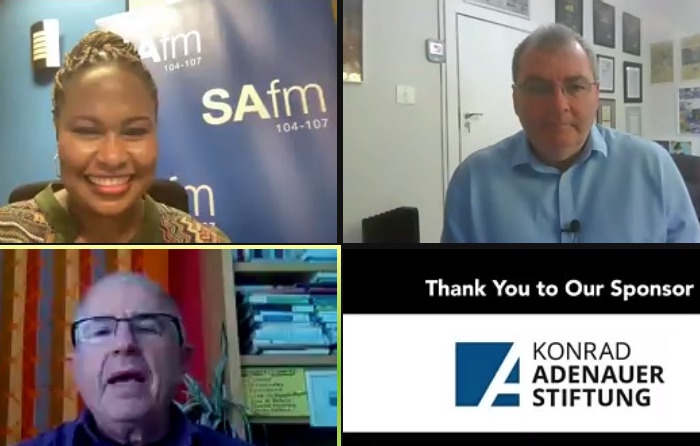 How do you build a long and successful career as a broadcaster? Two people who are highly qualified to talk about this topic are renowned presenter and journalist, David O’Sullivan, as well as popular radio and TV broadcaster Sakina Kamwendo.

Session 9 of Radio Days Africa (‘The Friday FireSide’) was a ‘three for one’ special in fact, as a result of a surprise twist that saw industry legend Jon Perlman take over the hosting reins from O’Sullivan, effectively turning the tables and interviewing him for the second half of the discussion.

If insights on how to sustain a long career in radio are what you’re after, or you’re looking for inspiration to keep you going on the  journey to get there, this is a 90 minute conversation that you should download or stream more than once.

Kicking things off and talking about the roots of her passion for radio, Kamwendo positively beamed about receiving a radio from her mother for her twelfth birthday.

“It was my prized possession. [Even at that point], I was always listening to the radio,” she said. Decades later, this still hasn’t changed. She told attendees that she still listens to all forms of radio these days, even dabbling in campus radio from time to time as well.

A passion for listening to radio aside, her journey to getting on to radio wasn’t exactly plain sailing. Kamwendo cites “sheer persistence” as the primary reason she is where she is today. Back then, she used to ask herself just how badly she wanted a career in broadcasting every single day.

As long as the answer was “bad enough” (which she says it always was) — even while juggling married life, young children and a full-time job at the same time — she kept going. That attitude is still useful as an established broadcaster today, which continues to be challenging. “You’re always hustling,” she said. “You just don’t have that security blanket as an independent contractor”.

Kamwendo first got her foot in the door at 702, when she was offered a job as a call screener for one of the graveyard slots. The opportunity had come about after her demo had done a fair share of bouncing around, including landing on the desk of a (then) Kaya FM decision-maker who agreed to meet with her, only to distastefully ask “so what are you going to do for me?” when she arrived. This was thankfully a once-off on her career journey, and an experience which she didn’t let detract from her greater ambitions to get on air based on her talent, work ethic and sheer passion for the field.

Soon enough, her passion got the opportunity to shine through in a big way when she started presenting traffic updates on O’Sullivan’s show on 702. This would eventually lead to other opportunities, including a short-lived stint at SAfm. The opportunity was only cut short because she was poached by the (then newly started) Metro FM. From there, her career really took off.

Kamwendo didn’t mince her words when talking about the challenges she faced once things started happening for her, especially highlighting the fact that “as a black woman, you are most dispensable in this industry”. It’s clear that resilience and persistence in spite of this and other challenges has led her career to the incredible place where it is today. As O’Sullivan put it so well to his guest, when it comes to building a career in radio “you’ve got to actually do the hard yards. And you truly did the hard yards”.

By the time Jon Perlman took over the hosting reins from O’Sullivan, the chat box was filled to the brim with questions. “I’ve been listening with great admiration to Sakina about her experience,” he began as his face popped up on video. A confused O’Sullivan would soon learn that “the boot is now on the other foot”, and that all questions would now be directed to him for the remainder of the session.

O’Sullivan spoke openly about his journalistic beginnings, referencing early press conferences he attended, including those of late former president Nelson Mandela. He also talked about two stories he vividly recalls being affected by in childhood, both serving as early indicators of his passion for journalism. The first was the assasination of Hendrik Verwoerd in 1966, and the subsequent fear around John Vorster replacing him. The other was the first heart transplant by Chris Barnard in 1967. As a result of his infatuation with these stories, in his own words, “my mother said [she knew] I was going to be a journalist”.

As the conversation progressed, he also discussed past interviews he wished he could do over, including mentioning an ill-timed meant to be a lighthearted question to Pravin Gordhan that was shut down almost as soon as it left his lips. The one interview he wishes he could “do over” would be one he conducted with ‘Rooi Rus’ Swanepoel, a man who was one of the chief torturers of the Apartheid regime. He not only forgot his microphone pack at home that day, but knowing now about all the atrocities committed by Swanepoel, he would certainly have a few other questions to ask him instead of the ones he did.

Having talked to so many different figures, often with a very direct style of questioning, surely O’Sullivan has also been quite fearful somewhere along the way? “I’ve been nervous, but never been scared,” he said calmly. “I love the surge of adrenaline too much. I also love the excitement of waking up knowing that I’m going to get to tell people this particular story”.

The afternoon session had a tough act to follow, but it didn’t disappoint, as MacGyver ‘MacG’ Mukwevho and Sol Phenduka from Podcast and Chill fame (now with over 225 000 subscribers on YouTube) talked about their transition from radio to finding success in the podcasting realm. ‘What the Mac!’ was hosted by radio veteran Neil Johnson, who employed a delicate balance between the lighthearted and the serious as the duo talked about the highs and lows of their journey so far.

Mukwevho first got his start in the entertainment business as a teen presenter on e.tv’s Craze Back when the network first launched. This led him to a stint on YFM (“Being on radio is like feeding my soul”), where he ended up meeting his future podcast co-host. Phenduka had a more linear journey that started in campus radio, eventually enjoying a stint on 5FM too. Discussing YFM specifically, he credits the station for the creative freedom it gave its presenters back then. “It gets you ready for any other station”, he said.

Growing listenership aside, the podcast faced some controversy earlier in 2021 for transphobic comments made during one of its episodes. In the podcasting masterclass session yesterday, Jon Savage alluded to the fact that their listenership had actually increased after the press surrounding the scandal. Responding to what they learned from the experience, Mukwevho says they sat down and started figuring out how to make it a teachable moment for themselves, as well as for “other people who are ignorant about LGBT issues too”.

“We had someone come in, to school us on where we went wrong,” Phenduka added. “We can’t push or promote hate speech. Our responsibility is to not abuse the platform and the trust of our listeners”.

The pair have since also gone as far as helping to conceptualise an LGBT show on their podcast network, which in their own words, “stems from our own ignorance”. Better aware of their responsibility to use their growing influence wisely, the pair are optimistic that the future of the show continues to be bright.

“At the end of the day, it’s all about the value we bring to our listeners”, Mukwevho said. “Our main goal is just to produce the dopest content available”.