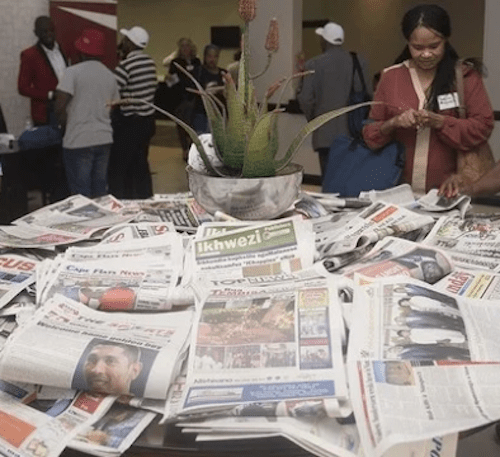 The MDDA is the statutory body responsible for developing media projects in South Africa. There appear to be serious governance problems with the agency, GroundUp News reports.

Last week we reported that the Association of Independent Publishers has threatened legal action over how the R38-million Economic Development Fund is administered by the MDDA, but the problems go much deeper than this.

Funded by government grants and the Universal Service and Access Agency (USAF) levies paid by broadcasters, the MDDA’s revenue was R104-million according to its annual report for the 2020/2021 financial year. Broadcast funders provided R61-million of the revenue and government grants and subsidies R40-million.

The MDDA was established in 2003 in terms of the MDDA Act, with the mandate to promote and develop “media diversity” in the country. It is meant to provide grant funding and training to various media projects, specifically in historically disadvantaged communities by supporting community radio stations and print media.

According to the MDDA Act and regulations, the agency must spend a maximum of 25% of its budget on employee costs, and 75% on grants and related expenses.

This is generous. An experienced person in the South African donor industry informed GroundUp that typically a charitable-like institution is expected to spend about 8 to 10% of its funds on running costs. At most, and in rare circumstances, this may go as high as 15%.

But in 2020/21, the MDDA spent over 30% of its total expenditure on employee and board costs alone, far exceeding the prescribed 25% limit of the Act. With a further R8 million on administration it spent over 37% of its revenue on running the organisation. It reported R65-million in grant expenditure.

For 2021/22, the MDDA originally budgeted R47-million in grant expenditure and almost as much (R46-million) in employee, board, and administration costs.

The projected budget for 2022/2023 puts employee, board, and administration costs at 47.5% of the budget, exceeding even the allowance of 35% made by the Act to establish the MDDA in its first year before it was fully functional for distributing grants.

And yet despite the high employee costs the MDDA still does not always manage to disburse all the revenue it receives for grants. In 2019/20 it ran a surplus of R21-million, disbursing almost R40 million less in grants than it had budgeted.

In 2020/2021, nine community print publications collectively received R3.3 million and 22 broadcast radio and TV stations received R43.9 million in grants. In a SABC Interview in March, the CEO Zukiswa Potye said that they had received 80 applications from community broadcasters, of which they could only fund 20, and 170 applications from print publications, of which they could fund fewer than ten.

The MDDA declined to disclose or explain its revenue and expenditure for 2021/2022, saying the figures have not yet been audited.

The CEO had a salary of R2-million and the CFO R1.7-million in 2020/21. The office of the CEO had six employees who collectively cost the MDDA R10.5-million. The CEO also got a bonus of about R105,000 and allowances of almost R400,000, earning more than a provincial premier’s gazetted remuneration.

In comparison, the National Arts Council (NAC) CEO earns R1.85-million, and the NAC disburses more than R400-million in funding a year, yet spends less on salaries than the MDDA.

There are also concerns about the leadership of the MDDA. Its chief executive officer (CEO) Zukiswa Potye was suspended by the board in April in a controversy over chief financial officer (CFO) Yaseen Asmal’s contract. Potye then accused the board chairperson of victimisation and harassment, City Press reported.

DA MP and member of the Parliamentary Portfolio Committee on Communications Tsholofelo Motshidi-Bodlani told GroundUp she is “concerned with what seems to be personality clashes between the CEO and CFO, leaving the entity in limbo”.

The portfolio committee was briefed in April on the MDDA’s 2022/23 Annual Performance Plan. Governance issues were not discussed because the MDDA did not submit a report. The committee asked for a report to be compiled and submitted.

Motshidi-Bodlani wants the portfolio committee to conduct oversight visits rather than rely on officials presenting information. “The DA believes a visit to the entity will produce better results as we will have first-hand information on all the issues raised,” she told GroundUp.

Sibeko is still employed by the MDDA as the monitoring and evaluation manager and alleges she was overlooked for a post. Ndibongo is alleging that since 2018 he had been victimised by Potye in an effort to oust him from his post.

According to the City Press report, leadership squabbles at the MDDA go back to 2013, with a 2014 forensic report finding irregularities in the MDDA’s management. For example, in 2017 acting CEO Donald Liphoko told News24 that he had been intimidated after addressing mismanagement at the MDDA. Liphoko had been appointed by Communications Minister Ayanda Dloldo after a long leadership void at the MDDA. The board of the MDDA was also inquorate at the time. The MDDA went through six acting CEOs in 2017.

In 2017, DA MP Veronica van Dyk raised concerns in Parliament that MDDA board chairperson Phelisa Nkomo paid herself R80,000 for acting as CEO, despite having denied doing so to the portfolio committee on communications.

According to the 2021/2022 Annual Report, the MDDA was also seeking condonation from the National Treasury on two matters of irregular expenditure dating back to 2017. These include R10-million irregularly spent on procurement non-compliance with Supply Chain Management legislation, and R39-million spent on broadcast equipment, a tender process that also contravened the legislation.

After we sent follow-up questions, acting MDDA CEO Mzu Kashe told GroundUp there will be no comment as the Association of Independent Publishers is taking legal action against the MDDA. “Everything we say, you will write, and it will be taken against us,” he told GroundUp.

© 2022 GroundUp. This article is licensed under a Creative Commons Attribution-NoDerivatives 4.0 International License.

Disclosure: GroundUp has previously applied unsuccessfully for an MDDA grant.

AIP statement on decision to sue MDDA and Competition Commission

The Association of Independent Publishers (AIP) have served legal papers on the Media Development and Diversity Agency (MDDA) and Competition Commission South Africa (CCSA) to review certain decisions by the CCSA and MDDA relating to, among other things, the criteria for funding of their Economic Development Fund (EDF) with a view to ensuring that the EDF benefits small, grassroots publishers who were the victims of unfair competition.

The EDF was established by the CCSA and administered by the MDDA. In 2011, the Commission initiated an investigation into various large media companies. The investigation uncovered evidence that the latter, through the Media Credit Coordinators (MCC) had agreed to offer similar discounts and payment terms to accredited and non-accredited agencies that placed adverts with MCC members. The Commission found that the MCC was ultimately a pricing mechanism that breached the Competition Act, 1998. As a result of these investigations, the implicated companies were fined an amount of R39 million and the funds were housed in the EDF.

Over a number of years, the AIP and its members have met with the CCSA and the MDDA to plead that a substantive portion of the funds be set aside to directly assist independent publishers, who bore the brunt of the unfair competition. However, these pleas have fallen on deaf ears. The CCSA and MDDA have chosen instead to allocate the funds to other categories such as start-ups and students.

The MDDA released a document on 17 January 2022 that confirmed that the amount collected was R39 million but only a tiny portion of the Fund (R5.2 million) would be disbursed for sustainability projects that would assist surviving publishers.

At the end of January 2022, the MDDA sent out an advertisement calling for applications to the Fund, giving applicants only a single month to apply. The AIP immediately expressed its distress and met with both organisations to discuss the eligibility criteria again and, again, no progress was made.

A small glimmer of hope then appeared when the MDDA Board stated that they were happy to meet with the AIP Board on 22 April to discuss the matters. However, nothing came of the meeting. The AIP then decided to take the matter to court.

Chairperson of the AIP Board, Mbali Dhlomo, expressed her disappointment at the manner in which these two state organs have treated the AIP. She stated, “They have been playing a cat-and-mouse game with us for far too long now. We need a solution which will be beneficial to our members who bore the brunt of the unfair and anti-competitive behaviour by the major media players between 2010 and 2015.

‘The community print media sector is made up of very committed publishers who have struggled for a number of years. It cannot be that when funds become available, only a fraction of these funds are allocated to the print media sector, and publishers have to apply to access them. They deserve better than what has been offered to them.”