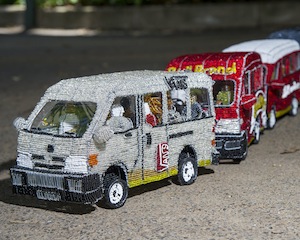 Advertising on local taxis is a little contentious. Quite a few potential clients rule it out immediately, regardless of how law-abiding the driver or roadworthy the vehicle, citing negative associations as their main concern. Other brands, in contrast, have boldly stepped into this space, realising the value of the market accessed via this medium – Huletts, BullBrand, and Scandal among them.

The myriad of taxi commuters queuing at ranks illustrates the demand for this form of public transport. Love it or hate it, it’s a vital part of the local economy, and essential to the lives of many. According to Santaco, over 18 million people travel by taxi, of which 15 million people travel daily to and from work – and that figure is no doubt growing.

But what about the ‘negative associations’ that plague taxis?

Primedia Outdoor, which has branding rights to minibus taxis nationwide, reaching a potential 18 million taxi commuters, accepts only the ‘cream of the crop’.

“We make a point of selecting vehicles that are of good quality,” says Terry Murphy, Primedia Outdoor’s marketing and marketing services executive. In addition, drivers who are found guilty of repeat offences are removed from a campaign. This means that taxi drivers and owners have an economic incentive to keep on the right side of the law.

Unsurprisingly, taxi commuters make up a serious chunk of the country’s consumers. They account for about 70% of Shoprite shoppers and 57% of Checkers shoppers, as well as making up 65% of the market for maize products; 63% for tinned fish; 62% for bread; and 62% for rice (TGISA 2014C).

Taxi commuters form the lion’s share of consumers across staple categories. The potential spending power of this market is demonstrated by the large number of mall developments in and around the taxi rank environment. One example is the R240 million development of the Pan African mall at Alexandra Taxi Rank, which brings in R30 million per month for tenants, according to Tebogo Mogashoa, chairmain of Tebfin Ltd, the developers of the mall.

In other words, as the demand for public transport continues to increase, the number of taxi commuters in the rank environment is set to grow, and with it, the audience exposed to taxi branding. This, at a time when reaching audiences through traditional media is increasingly tricky, thanks to fragmentation, declining viewers, and all the other pitfalls that are keeping the industry’s players from sleeping soundly at night.