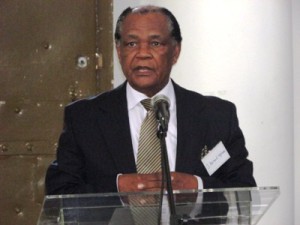 The Press Council of South Africa (PCSA) this week celebrated the 75 days since the watchdog body was revamped. Michael Bratt attended the gathering to find out what changes have been made.

Held in the atrium of the Women’s Gaol at Constitutional Hill, the event was well attended by the media, industry stakeholders and government representatives. Even though the former iteration of the PCSA was only two years old, changes had to be made due to the ever growing presence of digital media.

“The council is always ready to adapt to changing conditions, but remains focused on improving journalism in South Africa,” said Joe Thloloe, executive director of the Press Council.

The most striking difference between the old and new PCSA is that the entity now covers online media – those that subscribe to the PCSA’s code of conduct and ethics, which most do, but some do not – as well as print.

This change came about after careful negotiations, starting in September 2014, between the old council and the regulatory wing of the Interactive Advertising Bureau South Africa (IABSA), the umbrella association of online media in South Africa.

“The whole world is on the internet so we had to change,” said Judge Phillip Levinsohn, chairperson of the Press Council, of the change,

In the 75 days since it started accepting online complaints the PCSA has received 22 of them. They ranged from outright errors on websites to someone who did not win a competition. Social media posts can also be reported to the PCSA with Dinesh Balliah, deputy public advocate commenting on one worrying trend. “Some editors see social media as playgrounds, rather than publishing platforms,” Balliah said.

When asked what the PCSA is doing to show government, which was discussing a Media Appeals Tribunal, how effective it is being, Thloloe said, “This celebration is part of the process about getting the public and government to understand what we do, how we do it and the successes we’ve had… But it’s an ongoing struggle”.

Judge Bernard Ngoepe, chair of appeals, said, “The same principles will continue to guide us. I don’t see them changing drastically… We will continue to exercise our jurisdiction to enhance the credibility of the mechanism… We need at all times to inspire confidence in the system”.

The meeting was not without fireworks as one woman was escorted out of the room by security, while another, a journalist who has been taken to the Press Ombudsman multiple times, lambasted the panel for being too hard on journalists.

During the question and answer session the topic of the government’s proposed Media Appeals Tribunal was brought up. When asked to respond to this topic after the gathering, Thloloe had some strong words for government. “We have always been opposed to a Media Appeals Tribunal in all of our writings and interactions with the ANC. It would go against the South African Constitution. And they will be embarrassed when we go to the Constitutional Court”.

He went on to say hearings in Parliament were planned to take place this year to discuss the MAT proposal and while no date has been set, Thloloe said, “We are happy to go to talk with them in Parliament”.

Thloloe also revealed during the gathering that PCSA is currently negotiating with the Broadcasting Complaints Commission and National Association of Broadcasters (NAB) about the gray areas that exist with broadcasters who operate online. He also said the PCSA had received many complaints, particularly around Zulu publications, and PCSA has noticed a trend around court reporting complaints. In order to resolve this PCSA would hold a meeting in May in order to address some of the challenges that journalists face when reporting using documents.

The PCSA was formed to help readers hold publications accountable for lapses in journalistic ethics and conduct as set out in its code. Its work has, and will continue to be, guided by the -Constitution, the legal brains in the country as well as support from media players and the public at large. Initially it was set up as a body for self regulation by the media, but since the body is funded by media houses, the Press Freedom Commission headed by the late Judge Pius Langa changed it to include public representation, to avoid a conflict of interest.

During the event both Levinsohn and Thloloe stressed that dual regulation works best for media, not self regulation. As it stands now, public representation in the PCSA outweighs media representation.

This public inclusion aspect seems to be working. An academic study of the PCSA conducted by the Media Policy and Democracy Project’s Dr Julie Reid of the University of South Africa and Taryn Isaacs of Nelson Mandela Metropolitan University in 2015, done over five years, debunked the myth that the Press Council is biased in favour of the over complainants.

The report noted, “Our figures reveal that contrary to previous arguments and criticisms, the PCSA and Ombudsman have not in the past, nor currently, displayed significant bias toward the press and/or in favour of the press at the expense of the complainant”.

The study had several other interesting findings. Firstly it showed that over the five years, political parties were not the main complainants to the PCSA, business and private spaces were. It also showed that in 2009 it took the PCSA 233 calendar days on average to resolve complaints. This compared to just 59 days in 2013. It also highlighted the success of the PCSA, as only nine repeat offenders appeared during the five-year period. Speaking at the event Reid said, “Once a newspaper has been sanctioned by the Press Council, chances are it won’t do it again”.

A question of funding

The introduction of public members has not hurt PCSA’s funding. As of January the body now collects its own fees from member publications, whereas before they were collected by Print and Digital Media South Africa (PDMSA), which is in the process of winding down and a new body, the Publishers Research Council being formed.

Thloloe said the PCSA would always have enough funding to do what it sets out to do. He also responded to those people who believe that PCSA should be leveraging fines on media who do not follow the code of conduct or ethics. “The only thing media has to sell is its credibility. There is no bigger weapon than losing credibility because you have to run an apology. People who insist we impose fines don’t understand the importance of credibility,” he said.

Since 2007, the PCSA has adjudicated 2 657 complaints, and the number of complaints has dramatically increased from just 46 in 2007 to 591 in 2015. The PCSA says this is an indication of the growing support for its services as well as a better understanding from the public about its role.