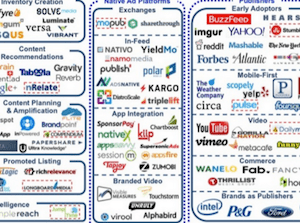 The role of the digital media planner is simpler now, says Cory Treffiletti. The ability to deliver subsets of the audience while still aggregating a large-scale volume is why the online business is an “easier” option, and why TV still has a ways to go.

In 2003 and 2004, after the dot-com bubble had burst and things started to come back from the dead, the industry exploded with new providers and platforms as programmatic started to gain a foothold. The omnipresent LUMAscape was born, and the ecosystem became cluttered with hundreds of companies vying for your dollars, with all of them doing something derivative of one another. The role of the digital media planner was complicated because you had hundreds of new companies to choose from.  It was the best of times, it was the worst of times.

Fast-forward to the present: The economy is unstable, and the ad business is starting to consolidate. Mobile is a powerful force alongside desktop display, and the players who can unify an audience across these channels hold the power in a significantly simplified ecosystem.

There still may be hundreds of partners, but consolidation and lack of funding is creating a world dominated by the 80/20 rule, where 80% of revenues are focused on 20% of the players. The big winners these days are companies like Google, Facebook, Twitter, AOL/Verizon and some of the large publishing companies.

The role of the media planner is simpler: Your clients won’t fire you for buying Google. Companies like Google provide a multitude of choices, so if one solution isn’t working, they can provide another. This walled-garden approach functions alongside a consolidated open Web, and the dollars are getting more and more focused.

The role of the digital media planner was complicated because you had hundreds of new companies to choose from.  It was the best of times, it was the worst of times.

It’s much like the ebb and flow of TV over the years. In 1965, advertisers had three options.  In the ’80s, the TV business expanded due to the growth of cable, and now TV is the cluttered channel, while digital is more focused, like the TV landscape of the ’60s. Spending money is becoming easier in digital than it is on TV.

This realisation is a new one, and the only underlying complication is data. Data is what has made consolidation in digital practical, as programmatic platforms combined with addressable delivery have made it easier to focus your money and still be targeted. It’s not solely about the context anymore, because you can slice and dice the audience and focus your dollars on a subset of the content.

That ability to deliver subsets of the audience while still aggregating a large-scale volume is why the online business is an “easier” option, and why TV still has a ways to go.  It’s about limiting waste. TV still has waste embedded in how you buy, while online no longer does.

Once again, looking into the future you can see further consolidation no longer driven by the channel, one more focused on the cross-channel partner. For example: TV partnered with digital and consolidated on partners like Google and Facebook, plus Comcast and Time Warner, plus AOL/Verizon and AT&T.  All these companies, whether through their own methods or through partners,  can provide a view of the consumer across channels and activate that view with effective ad vehicles.  They can establish frequency with targeted reach, and through customised delivery that identifies where in the customer journey that consumer may be.  This is exciting.

What’s different from the model of TV in the ’60s is the element of proof.  In the ’60s you spent your money to deliver a message, and you hoped it worked.  These days we have the tools to prove the value of that messaging, which is a very important concept.

And, of course, we’re a little hipper than many people in the ’60s.  Don Draper, eat your heart out!