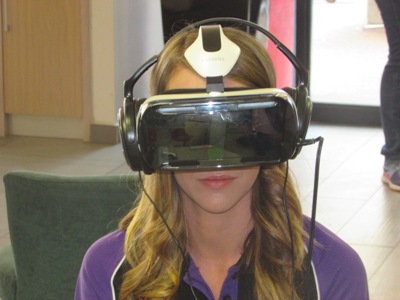 Mindshare South Africa hosted its second annual Huddle at its offices in Sunninghill, this year under the theme of ‘Being curious’. Michael Bratt went along to see what was on offer.

With so much to see and experience at this year’s event, it was very hard to pick what activities to visit, particularly the talks that were on offer. But I must admit that what caught my attention as soon as I walked in the door was the technology on offer. I immediately settled down with a virtual reality headset and was taken on a journey that included walking with elephants, a ride on the Anaconda at Gold Reef City, and singing the South African national anthem with the Springboks, along with a packed stadium. Another virtual reality setup then caught my eye, but this time it was Discovery Channel’s app that allows you to view 360° content on your smartphone. I was transported to the bottom of the ocean along with the Mythbusters team as they tested a myth that involves more sharks than I am comfortable being around.

I then decided it was time to get back to reality and stopped in on one of the talks as Steve Carver, Partner at Bish Bash Bosh & Co explored the topic of Goodvertising, advertising by brands that also empowers and benefits communities and society. He unpacked how he had created a self-sustaining university in the small town of Karatara in the Western Cape. Students have to run actual businesses and the professors who teach them are paid with a portion of the revenue that the student’s make. He describes it as education that pays for itself, imparting skills to the students that can actually be used to make money. He also touched on how a community in Paraguay helped itself, by having families come together to address problems. There were two takeaways from Carver’s talk. Firstly the term community is “bullshit” as it does not lead to anything being done as everyone assumes someone else is going to do something. He rather speaks about families who need to help other families. Secondly he says it is in the interests of brands to empower and uplift families as not only will brands receive exposure from doing so, but the “richer” families are in a better position to engage with the brand.

Entertaining and educating people on the move

Before the next talk I stopped in at a few of the other technologies that were being demonstrated. The first one was a product of JC Decaux, which sees an avatar, in this case a fox, engage with people as they walk past a screen. Some people were fooled into thinking it was fully automated, but in reality a person offsite is talking to passersby and can see them through a camera. Even so, it is pretty impressive and could be featured very soon in malls. Imagine being personally greeted and engaged with by Mrs Fox as you are about to start your shopping!

The next offering sees people being entertained and educated while they are on the move. Mortimer Harvey has developed iTaxi, a free to browse site for people to keep entertained and informed while travelling in a traditional mini-bus taxi. Traditional advertising will be used to pay for the service and ongoing research will lead to more personalised content for people as they browse.

Before heading back into another talk I had another stop, the chance to experience what it would be like to drive a supercar. The Times Media team brought a car, complete with a seat that simulated actual bumps in a road, realistic sounds through headphones and an actual steering wheel. Watching on a monitor, participants raced around a track trying to get the best lap time. While I did not get a chance to drive (probably a good thing as I am known to have a heavy foot on the accelerator), since the attraction was so popular, I was able to watch others and likened it to what you would find in an arcade, just much more advanced.

A different (funnier) take on ROOTS

I have heard the ROOTS presentation a couple of times before, but thought I would give Spark Media a chance at their presentation, as they had hyped that a comedian would be speaking. I have now seen ROOTS in an entirely different light, as Jason Goliath gave his unique take on the consumer research. He explained that ROOTS isn’t just about who the consumers are, it’s also about how to communicate with them. He added that he will be using ROOTS to change the way he communicates with his audience, depending on where he is performing. He cheekily said that ROOTS is also able to tell him what content will offend and won’t offend the audience in certain areas.

Behavioural and location based targeting

One more talk was to follow but before that I popped into three other offerings. First off was the Media24 Beauty Bar for a bit of pampering of my nails and a touch up of my makeup (just kidding, I would never have got an appointment with the amount of women who flocked to it). I then had a look at the Caxton stand, a pop up that brought to life the cover of the August issue of Woman & Home, before checking in at the audio and video recording booth, where attendees could co-create a song about curiosity. I didn’t get the chance to actually record a song (my singing career will have to wait), as the next presentation was about to start. Primedia gave a fascinating talk around behavioural and location based targeting which, although quite technical in places, conveyed the latest developments in this space. It is scary to realise just how much information an Out of Home advertiser can get about you, if you give them permission by logging into your social media accounts or even onto Wi-Fi!

It was a well-spent half a morning and afternoon, and it was amazing to see the new product offerings that media companies are coming up with. The future of virtual reality and 360° content is certainly bright in South Africa and personalising content through different technologies seems to be the next step for advertisers. A final activity that happened was a silent disco, but I left before it began because I am a terrible dancer!