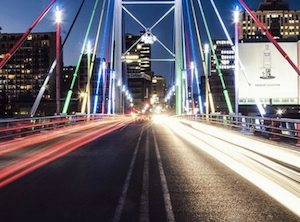 Just the other day as I was flicking through a pile of my old DVDs from before the millennium, I switched on an old favourite, Sex in the City, and while watching the first few episodes, I couldn’t ignore the drastic shift in the way we had previously engaged with one another.

Before the tech savvy generation that came prior to 2000, people would interact at dinner parties with guests chatting to each other being really connected in the conversation – being present in that moment. Not distracted by anything on the other end of their mobile phones and having to use the only landline in a restaurant to check an important message.

This ’90s sitcom got me thinking of the scarce commodity that has dawned upon us today – human attention and interaction. With the abundance of advertising messages and chat applications, the human attention span has shrunk. Have we become “goldfish” with the constant messaging being thrown at us daily? We hold attention for eight seconds, a second less than what a goldfish does; this is indeed an important concept for all marketers and advertisers to keep top of mind when developing their strategies. Breaking through the clutter is a mammoth task.

With the above being said, let’s see what trends are keeping us captivated.

Virtual reality (VR) continues to be a playground for travel marketers. The travel and tourism industry is all about selling people amazing experiences; a moment in paradise, an intrinsic feeling of satisfaction through landscapes, mountains, oceans etc. Usually this was sold through beautiful pictures in brochures, magazines, apps or on travel websites and blogs to name a few marketing techniques.

Although these conventional marketing techniques have worked best in the past, there has always been a disconnect for marketers between travellers with the intent to purchase, to literally giving them the real experience – what they will actually experience at their holiday destination, instead of having to leave it up to their imagination.

VR has certainly brought innovation to the way that holidaymakers immerse themselves in the travel experience of their perspective travel destination, giving them the opportunity to experience and test out the destination as well as aid them in their purchase decision in a more realistic form.

Internet of everything brings people, processes, data and things together. Internet of things is the connection of physical devices, embedded with electronics and network connectivity that enables the objects to collect and exchange data. Which enables marketers to market only to their target audience.

Thinking about a household and how devices within the house can exchange data, machine-to-machine connections will generate important benefits to infrastructure in areas such as security, medical automation and transportation.

It has already made headway in certain countries whereby consumers can bring all their appliances to work together to send and exchange data. For example, through your phone you can switch on the AC to a certain temperature, even if you are out so that the heat is regulated to a certain temperature. This comes in handy in the most profound way, the other day an old colleague was telling me about her daughter who is fighting leukaemia and the importance of the heating being at a certain degree. Even when visiting the hospital, they are now able to ensure the temperature is just right for when they arrive home.

We’ve heard it many times; content and context is king, but this continues to hold its importance even more than ever before. Branded content is about creating compelling content that people seek out, in our business it’s about fighting for consumers’ attention in a world smothered with information. It gives consumers a reason to spend time with you. Branded content harnesses the power of stories, an essential human truth is that since our inception, we have relied on stories in short hand to convey information to create bonds with people to make them laugh or cry. We use this understanding of our DNA to link brands to give them identity and purpose, with the intention of creating change or action whether that be sales or awareness.

Content curation is just as important, this ensures that your content is used in the correct context and presented in a meaningful way.

Facebook has seen tremendous growth and has catapulted via mobile, with social networks being used more and more on smartphones and tablets and is said to grow to 12.9% between 2013 and 2018, while desktop and laptop engagement will decline by 7.5%.

The rising engagement of social networks has been driven by the focus of video content. The launch of Livestream on Facebook will only increase the above statistics with Facebook’s video views placing at eight billion.

Video content has taken centre stage online and this channel is continuing to grow with rapid momentum daily.

Never forget that competition is fierce, as messaging and video app Snapchat is working hard to own the mobile video space, while YouTube still remains resilient. Snapchat recently stated that it gets 10 billion daily video views and has been pushing ad products to get brands interested.

Snapchat has seen a relatively fast rise to the digital arena, although it was slow to pick up it has gone mainstream in a big way.

The growth of Snapchat can most certainly also be related to the goldfish syndrome mentioned earlier, the attention span of consumers has become far less and with Snapchat the duration of videos is only 10 seconds, keeping the viewer captivated for a short period but delivering the right message. The growth of Snapchat’s mobile video traffic is astounding. Snapchat users view, on average, more than seven billion videos through photo and video sharing on the app per day, according to Fortune. According to an earlier Financial Times report, between June and November last year, Snapchat’s video traffic tripled to six billion per day.

Snapchat users are able to share their stories and moments in a fun manner that is interactive and easy to use. With video content growing, they will surely be experiencing even more growth in the coming months. Snapchat is changing the South African media landscape as we know it, having had a high adoption in the LSM 7 – 10 group.

Mobile phones will soon be the primary screen across Africa. The growth of digital is attributed to the platform becoming increasingly more accessible to the consumer via cheaper mobile data packages and increase in bandwidth. The accessibility of cheaper smart phones entering the market has also increased access to the platform in the lower market segment, giving this “new user” a whole new experience. Google has recently stated that there are more searches on mobile than on desktop.

These are just a few trends that will continue to expand their services and adapt their functionalities to suite the lifestyles of today’s consumer. It is the responsibility of communication and marketing companies to ensure that they are utilising these platforms and technologies to get the best results for their clients.