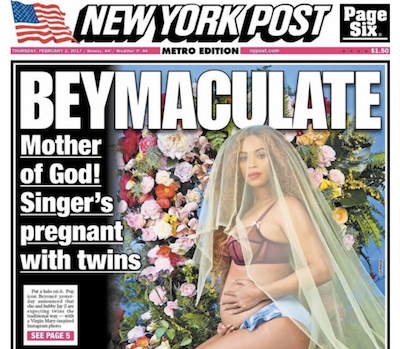 On the first day of US Black History Month, Beyoncé revealed her second pregnancy in a series of striking and beautiful images re-appropriating classical and religious iconography.

The central image, posted on her Instagram account, depicted the artist and activist in the style of the Virgin Mary: wearing a veil, surrounded by a halo of flowers. The announcement and accompanying image quickly became the most liked post on Instagram and numerous press articles appeared, attempting to decode the symbolism in Beyoncé’s visual essay.

While the Guardian and Vox picked up on the Virgin Mary imagery and its associations with authority and virtue, The New York Post went the furthest, dedicating its front page to the ‘Beymaculate Conception‘.

The Virgin Mary is traditionally represented in art as a white woman. Often her complexion takes the palest possible hue, apparently connoting holiness and innocence. Cultural critic Richard Dyer showed that “in Western representation, whites are overwhelmingly and disproportionately predominant, have the central and elaborated roles, and above all are placed as the norm, the ordinary, the standard. Whites are everywhere in representation”. Whiteness, then, occupies a position of cultural hegemony as “normal” and neutral, and religious iconography that – quite literally – represents whiteness as divine, is a means of reproducing white power and superiority. 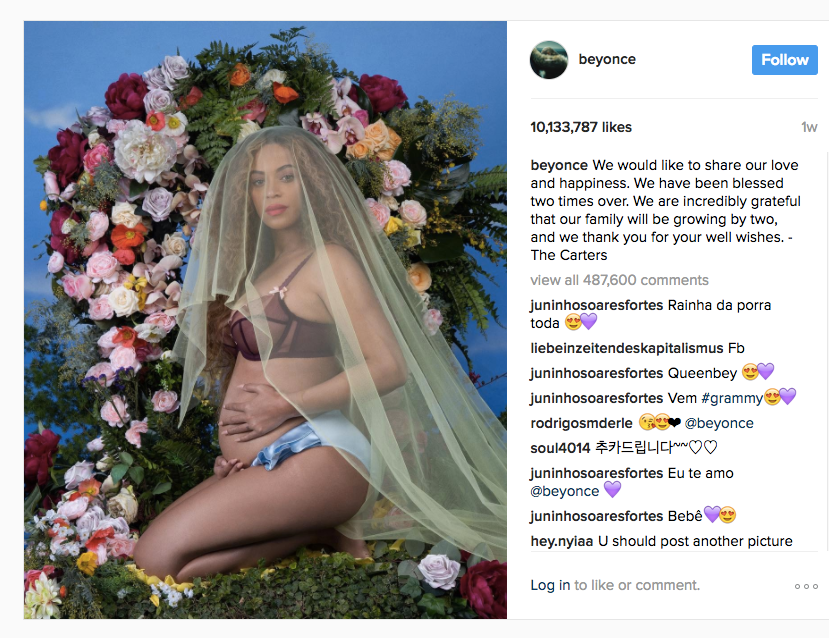 Beyoncé’s beautiful re-appropriation of Virgin Mary iconography offers a biting critique of this supreme exemplar of feminine whiteness and the ideology that constructs and perpetuates it. At a moment when white supremacy is echoed in the “America First” slogan of the new US President, Donald Trump, Beyoncé simultaneously dislodges “white” from its central place in religious iconography and Trump from his recent monopoly of press headlines.

Beyoncé is no stranger to the appropriation of religious iconography to challenge cultural norms. Cultural critic and theorist bell hooks coined the term “oppositional gaze” in 1992 to “see, name, question and ultimately transform” oppressive racialised images.

In 2013, the singer released the video for Mine, in which she’s also protrayed as the Virgin Mary, this time to recreate Michelangelo’s La Pietà, literally surrounded by whiteness, to subvert the racist and sexist ideas around ownership and black women.

Christian imagery offers prescriptive images of socially approved women. As Kelly Brown-Douglas argues, “positive images define what female ‘goodness’ looks like and urges women to imitate the qualities of these images”. Images of the Virgin Mary are central to Western culture as a symbol of ideal femininity that equates whiteness with beauty, purity and virtue, and artistic representations of the Mother of Christ have helped to define how women are publicly represented.

But Beyoncé doesn’t simply create a powerful and iconic image of black femininity in her pregnancy announcement images. Images of the Virgin Mary usually depict her fully clothed, including a head covering. The Virgin Mary’s attire must suggest chastity, purity and (sexual and spiritual) virtue. Beyoncé also subverts this ideal by posing in mismatched lingerie, cradling her pregnant belly, and in doing so fuses elements of the “Jezebel”, one of the most prominent stereotypes of black women, with Virgin Mary imagery. This boldly challenges concepts of “acceptable” female sexuality and racialised stereotypes.

Black women came to be associated with Jezebel, another stereotype based on a biblical character, during slavery when “the Black woman as Jezebel was a perfect foil to the White, middle-class woman who was pure, chaste and innocent”. The Jezebel stereotype was used to rationalise sexual atrocities against black women and its insidious influence persists in contemporary culture.

For example, where all women are objectified and hypersexualised in advertising, black women are far more often marked as hypersexual and subhuman, or to take novelist Alice Walker’s famous words:

The cultural residue of the Jezebel stereotype means, therefore, that black women continue to be more vulnerable to sexual assault and, as psychologist Carolyn M West explained: “Black women may receive a double-dose of cultural rape myths, those that target all survivors and those that claim black women especially for deserving the assault.”

In the images accompanying her pregnancy announcement, Beyoncé simultaneously confronts and undermines the historical racial and sexist stereotypes of the Virgin Mary and Jezebel, and responds to the association between whiteness and purity that remains alive and kicking in Western culture. Bow down.