LATEST NEWS
Home Out of Home More digital, in out of home too

More digital, in out of home too

Posted By: Jean Sebastien Decauxon: March 28, 2017In: Out of Home
Print Email 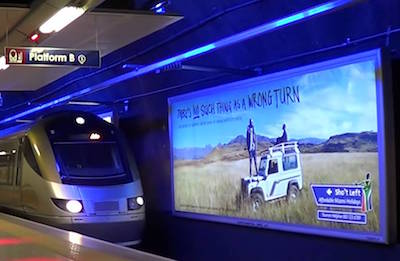 There are a number of reasons why OOH continues to grow in the new digital economy and these are particularly pertinent in developing markets, in Africa generally and beyond.

The outlook for 2017 is that it is likely to be a pivotal year in advertising with more rapid growth in digital advertising in emerging markets likely to make the penetration of this sector match that of the more developed markets by the year-end. The rise of digital continues to prove a challenge to many traditional media with some, like press, generally in steep decline. The trend towards digital, however, is not merely benefiting online media providers but is also a growth driver in the out of home space.

There are a number of reasons why OOH continues to grow in the new digital economy and these are particularly pertinent in developing markets, in Africa generally and beyond.

Foremost of these drivers is a significant growth in urbanisation of populations coupled with a notable bias towards younger audiences, particularly in developing markets. The proportion of people living in towns and cities is expanding rapidly in the developing world and even continues to grow in markets regarded as already highly developed, such as those in Europe.

Advertisers wanting to reach these audiences will increasingly connect with them via the growing infrastructure needed in modern urban environments, in transport and retail, much of which is supported by the increased presence of OOH advertising. This growth is matched by acceleration in the movement of people generally, as urban infrastructure is enhanced to meet their needs. Air travel is forecast to continue growing significantly throughout the world, developed and developing, providing a platform to target higher net worth individuals.

Growing mobile, and more recently smartphone penetration means that online messaging is shifting from desktop to the phone in your pocket. Already high in markets such as South Africa, developing markets will see smartphone penetration increasingly rise in 2017 to levels more akin to those in the developed world. In this circumstance location-based marketing becomes a significant force, with OOH and the mobile platform particularly suited to working together to influence consumer behaviour.

This movement of people and technology is further augmented by technological development in the OOH industry itself, with 2017 seeing an increased deployment of digital OOH screens capable of reaching large audiences with flexible, contextual messages. This deployment will augment the growth of tactical messaging in the online space, which on its own has relatively low coverage. In addition to this ability for OOH to drive consumers to specific mobile messaging, advertisers will increasingly take advantage of the interactive possibilities for interaction of the smartphone, and mobiles generally, with OOH in the “active space” of the urban environment. In 2017 this combination of greater deployment of digital screens and customer interaction will mean a greater development of e-commerce in an urban setting.

These trends will lead to growing pressure for increased accountability in both the online and OOH space. Already widely present and used in the leading developed markets, OOH measurement based upon globally recognised standards will also become more common in the developing markets. The cross fertilisation of international knowledge and practice is seeing us roll out consistent audience measurement for OOH in markets as diverse as China, South Africa and Brazil. The OOH industry will develop this in further markets in the coming years. Similarly the online space, and indeed other media, will need to look to develop industry recognised accountability for their advertisers, after all a key element of all advertising communication is “viewability”.

These measurements make possible a final key driver for 2017, the merging of data platforms. In an increasingly location-based marketing world access to, and the intelligent application of, data will become more and more important, indeed vital. Our own company is devoting significant resource on a global basis to the utilisation of data to enhance the relevance of our media channel.

This not only involves companies investing in data but also the building of tools that can utilise data sets in real-time in both the planning and delivery of media. Data can make the elements of the platforms chosen for delivery more appropriate to the advertisers target audience, both in space and time. In addition data can contextualise that delivery and via digital platforms, including OOH, heighten the relevance of the communication.

We look forward in 2017 to embracing developments in this area to the benefit of all of our customers. Digital growth is undoubtedly principally taking market share from other media fuelling a potential opportunity for advertisers for growth in this area. In 2017 this is increasingly likely to be targeted at big TV budgets. High quality OOH has a notable role to play in the effective use of messaging, which is increasingly location-based.