Axe murders, amnesia, an audience and the media 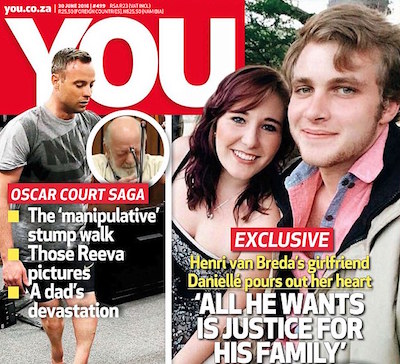 A 20-year-old man stands accused of murdering his mother, father and brother with an axe and attempting to murder his sister. She subsequently develops retrograde amnesia and may or may not remember what happened and may or may not testify against her brother after he was arrested and charged with the killings.

It sounds like the plot of a popular daytime soapie, but this the very real story of Henri van Breda, whose trial resumed this week after a long delay.

The delay was caused by the weirdest part of the whole saga, and was due to a media house, Media24, applying for the right to live stream the proceedings. But what do media players get out of live streaming court cases? And could it impact the outcome of the trial? .

In the US, there are television channels dedicated solely to watching court cases. It hasn’t reached this level in South Africa, but even so there is a fascination with watching them and all the role players in the case. But just what exactly is the appeal? Some would argue that it increases the transparency of the justice system as the general public can watch it at work first hand. Tied in with this is the belief that it helps educate the public about how the system works. But others would argue that it is merely a source of entertainment, or voyeurism, particularly when celebrities or the wealthy are involved (think back to the downfall of Oscar Pistorius).

eNCA editor in chief, Anton Harber, summed it up best. “Our courts are the Roman arenas of our time: A place to catch all the moral, social and political battles of the day, played out in a theatrical setting, full of tension, characters and conflict – all the ingredients of great drama. It is a natural arena for television, and that is why a high-profile case often draws high viewership.

“But we also have a social responsibility: Justice has to be seen to be done and television can take it into the nation’s living rooms and onto our mobile devices. Our live streaming is contributing hugely to showing the workings of justice and enabling people to follow and learn about the complex legal issues at stake,” he says.

What media gets out of it

But just what do media organisations get out of live streaming? They can’t be doing it simply to just educate the general public on legal proceedings. As with all business, it comes back to money. Live streaming brings in additional visitors to news sites, particularly if the court case is compelling (involves celebrities).

Aasra Bramdeo, executive producer at SABC Digital News, explains. “User habits have changed – and access to information on multiple devices is important. There is therefore greater reliance on net based devices for access to information. It forms part of the public mandate to provide access to news and information anytime anywhere… Streaming allows the SABC to present real time coverage, as well as make available, at any stage, the full coverage for access post the event. Streaming also obviously extends coverage beyond terrestrial borders.”

She adds that news sites that use their YouTube channels to live stream the proceedings, like the SABC does, can utilise the video site’s monetisation feature for adverts to appear before the videos with YouTube then sharing the advertising income with the content providers.

But not all cases will bring in the revenue. Harber explains that advertisers are sometimes wary of being associated with certain kinds of trials, a belief that Bramdeo shares. Just like any other advertising situation, advertisers must weigh up how their brand will be perceived by making their presence known in certain situations, something which sometimes can go horribly wrong for them.

One argument that can be made against live streaming a court case is that this could affect the outcome of it. Van Breda’s lawyer Lorinda van Niekerk believes this is the case, as well as the fact the live streaming may distract the witnesses when they are on the stand. Already in the van Breda case, the defence has said that certain witnesses have stated they will not testify if the proceedings are broadcast for the general public to see.

Another side to this argument is that witnesses could be coerced or advised or forced to change their testimony if they think it will make them look bad in the public’s view. The van Breda case has recommenced despite the live streaming appeal still being pending at the Supreme Court of Appeal, so currently no live broadcasting is taking place. But there is already a form of live coverage happening. If you just follow Twitter timelines, you can keep track of what is being said and done pretty accurately as journalists in the court room are live tweeting. One may ask, what is the difference between this and live streaming audio and video?

An argument for allowing live streaming is that it can be done with restrictions. The court has already said that Marli van Breda’s testimony will not be broadcast (as she is still in a fragile condition) and the law is behind those witnesses who state that they don’t want to be filmed i.e. they don’t give consent for their portion to be live streamed.

Bramdeo added, “Live streaming is not automatic and always subject both to news demand and the decision of the judge. However, the aim for the public broadcaster is open access and transparency – and providing as far as possible for real time coverage of key news events. Streaming allows for information sharing and education of the audience simultaneously. No commentary is attached – so there is absolutely no impact on the legal processes.”

DStv’s take on all this

In a written response to questions around live streaming of court cases, DStv said it reviewed requests for a special channel, “whether it is linked to a special event or a court case, on its own merit. A number of factors are taken into account when deciding whether to broadcast or live stream such an event including customer appeal and commercial implications including broadcast costs. Where live court cases are concerned, the business case for advertising is limited as marketers tend to be wary of any undesirable association”.

The impact of the Pistorius case

According to Harber, the Oscar Pistorius case broke viewership records. It will be interesting to see whether the Van Breda case gathers as much attention, as before the incident he was not a celebrity. But did the live streaming of the Pistorius case set a precedent for others to follow? “Although the Pistorius case has to be considered in similar applications, at least until a higher Court rules differently, the broadcast of trials (especially criminal trials) is not a foregone conclusion as a result of the Pistorius case,” Van Niekerk says.

The history of the live streaming debate and the way forward

This is how, according to Van Niekerk the live streaming debate played out. It began when Media24 brought an application to set up video cameras and broadcast the court proceedings of Van Breda’s trial, or alternatively to broadcast the proceedings with a microphone and sound.

“The National Director of Public Prosecutions (NDPP) and Mr Van Breda opposed certain parts of the relief sought by Media 24, mainly relating to the live streaming and/or audio broadcast of oral evidence to be presented by witnesses during the criminal trial,” she says.

“The NDPP and Mr Van Breda applied on 5 April 2017 for leave to appeal against the Court’s ruling,” Van Niekerk said. The NDPP and counsel for Van Breda have lodged an appeal with the Supreme Court of Appeal which is pending and will also approach the Constitutional Court.

Media24 was contacted several times for comment, but did not respond.