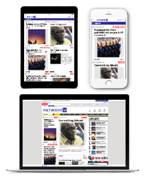 Cybertorial* When publishers speak of a newspaper these days, they generally mean more than the newsprint paper that is either delivered to one’s door or bought at a retailer. People in the newspaper business know that the online properties of the newspaper, websites, apps and social media, all form part of the news brand. This has, however, not necessarily filtered down to the layman or even, for that matter, to marketers and media agencies.

The word newspaper still invokes a mental image of the printed paper prone to leave slight traces of black ink on finger tips. Newspapers are in reality multiplatform, multimedia purveyors of news which have long since embraced the digital revolution.

Publishers have for some time been the leaders in a semantic revolution and started calling their products news brands. News brands have not been made redundant by the digital revolution, but they have been given a new life and new opportunities to reach audiences.

This matters because when brand owners are considering newspaper advertising in the marketing mix they are not necessarily thinking digital advertising. Credible heritage newspapers, or news brands, not only have the advantage of being able to offer multimedia, multiplatform solutions, but they have the trust of their audiences.

Audiences are paying for credible news

Local and international trends show that audiences are willing to pay for credible news and this is only increasing in the wake of the fake news crisis. Not all advertisers are necessarily giving their digital ad spend to heritage publishers and are thereby not capitalising on loyal and committed audiences, or leveraging on the influence that credible news brands still have.

The New York Times testifies to this. “Our digital-subscription revenue continues to grow at a strong pace, while revenue from digital advertising is growing in spite of the long-term shift of ad dollars to platforms like Google and Facebook. In the third quarter of 2016, our digital subscriptions grew at the fastest pace since the launch of the pay model in 2011. We now have more than 1.5 million digital-only subscriptions, up from one million a year ago and from zero only six years ago. We also have more than one million print subscriptions, and our readers are receiving a product better than it has ever been, with rich new standalone sections.

“Our focus on subscribers stems from a challenge confronting us: the weakness in the markets for print advertising and traditional forms of digital-display advertising. But by focusing on subscribers, The NY Times will also maintain a stronger advertising business than many other publications. Advertisers crave engagement: readers who linger on content and who return repeatedly. Thanks to the strength and innovation of our journalism – not just major investigative work and dispatches from around the world, but also interactive graphics, virtual reality and Emmy-winning videos that redefine storytelling – The NY Times attracts an audience that advertisers want to reach.”

Digital platforms have not only extended the potential reach of newspapers and made them more immediate, with apps offering news headline alerts 24/7, but they have allowed publishers to transform into multimedia news channels.

The New York Times unpacks their new visual-first digital strategy: “We are making progress in employing a richer, more digital mix of journalistic forms. The progress in audio, video and virtual reality are obvious examples. … The value of The New York Times does not depend on conveying information in the forms that made the most sense for a print newspaper or for desktop computers.”

Globally newspapers have been hosting video on their online channels for some time, many like the New York Times now offer live video and are venturing into the radio landscape with daily audio news podcasts. The Washington Post and Wall Street Journal also offer regular podcasts.

There is a growing trend of audiences going online and relying on the internet for news, according to Ofcom’s (UK communications regulator) latest report, says Damian Radcliffe in an article on The Media Briefing. “Among online users more than a third cite the internet as their main source of news in the UK, Germany, Italy, USA, Japan, Australia, Spain and Sweden. In many cases the different between the internet and TV, in this regard, was minimal, with online sources trumping TV in their primacy in the UK, Italy, Japan and Australia.”

Locally we are keeping on trend. Afrikaans newspapers have transformed into fully-fledged credible news brands at the forefront of the digital revolution. Media24 is now publishing stories digitally first with the editorial hub of Beeld, Die Burger, Volksblad and Rapport based together with Netwerk24 offices. Not only this, but the launch of NetNuus, the only Afrikaans news app of its kind in South Africa, is highly progressive. NetNuus provides comprehensive credible, yet snack-able news for the time-strained consumer and is styled upon the highly successful Tencent (Naspers’s internet giant in China), remodeled for the local market. Netwerk24 and NetNuus are multimedia platforms, allowing Ads24 to offer advertisers true multiplatform solutions offerings.

The Afrikaans market has been somewhat spared from the onslaught of fake news, having had their news curated by editorial teams with integrity. This has not gone unrecognised by the fiercely loyal Afrikaans audiences who are willing to pay for quality news in their mother-tongue. A good is example of this is the success of Netwerk24’s hard paywall that was instituted last July with an ever increasing subscriber base. It is now up to advertisers to recognise the value of credible and established news brands.