Testing fitness with tribes and laughter (With pics)

Are you as fit as a Shaolin monk? Or a Maasai Mara warrior? Two British comedians, Joel Dommett and Nish Kumar, ventured out to answer these questions as they visited tribes around the world in BBC’s programme, Tribal Bootcamp. Michael Bratt sat down with the two, at a BBC Worldwide programming event, to find out more about the gruelling tasks they faced and whether they succeeded.

“Moral support, more than anything, was the big thing for both of us,” Dommett says. “It was a very hard show to make at the same time as being funny… I genuinely don’t think I could have done it with anyone else,” he says, looking at Kumar. Aside from the support, Kumar provided commentary of events, while Dommett did most of the physical activities (as he is in better shape). It was easier to make the show more humorous as the comedy was bounced off the two of them.

Dommett says his fitness was pretty good when he began filming the series as he’d been going to the gym every day. But Kumar describes it in a more humorous way. “Joel’s fitness bar is different to normal human beings. By comparison to an Olympic athlete, I’m sure it’s fine, but by comparison to say for example, me, it’s borderline superhuman.”

Kumar did try many of the things Dommett did, but with much less success, and in one episode he even takes over from Dommett, doing all the tasks. 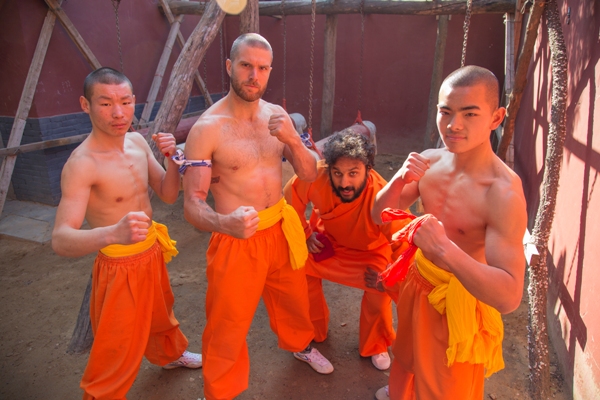 Joel and Nish with two monks at Fawang Temple.

Venturing into their world, Dommett and Kumar did not have as much success with the physical tasks as the tribe’s people did. In the first episode, which they shot in Mongolia, Dommett was beaten by a 13- year-old boy in wrestling and was body slammed by an eight-year-old.

“Joel had been taking a couple of beatings and they tried to bring out a smaller kid, because they were like ‘we need to move the bar down a little bit’, so they bought out a littler kid. And this kid just walked out, the other kids were in a grappling position, and this kid was just leaning on his knees and I was shouting at Joel ‘don’t mess around with this kid’. You know how a boxer who is standing like that is either terrible or Muhammad Ali, this kid was showboating a little bit, and I was like ‘Joel get out of there’. And he was one of the kids that dropped Joel.”

One of the most memorable moments on the show for him, says Kumar, was running two laps of an ultra marathon in Mexico in his underpants, as it is tradition for a friend to support the runner. Dommett illustrates his failure in that race by chiming in that 60-year-olds in jeans were lapping him, and that part of the race includes the team kicking a ball throughout it, but he never ever got near the ball.

A fascinating element for both of them was the various tribe’s attire. Being accustomed to modern clothes, they were both surprised by the warmth and mobility that the traditional clothing offered. However, one thing that they both struggled with was the footwear. 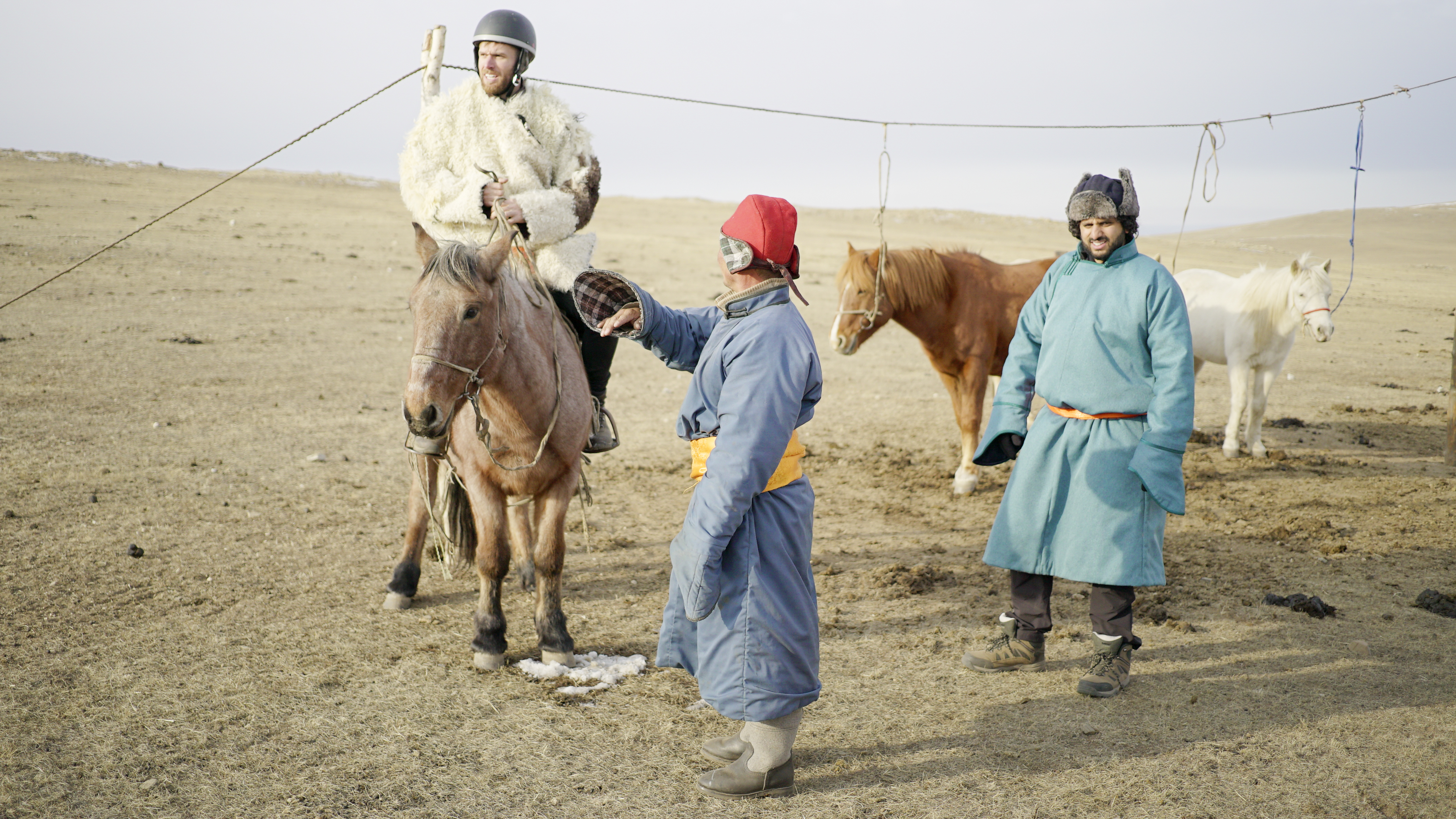 Joel learning how to ride a horse in Mongolia.

Kumar and Dommett have known each other for a long time, spending over 10 years together on the comedy circuit. They have lived together, and are genuine friends. This dynamic makes their presenting together work because as Joff Powell, BBC Worldwide’s commissioning editor says, “You can’t fake their relationship. Their relationship is so dynamic, authentic, they bounce off each other and it just fitted and it made sense”.

Kumar became part of the show, after Dommett, who was already working on it, was asked who he wanted to work with as they realised it wouldn’t work with only one presenter. Nish was top of Joel’s list. 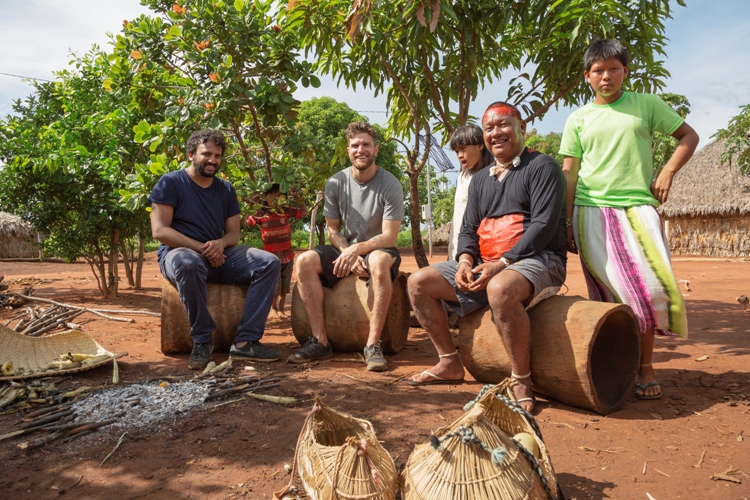 Nish and Joel with a Xavante tribe outside their hut.

Lion patrol and a profound thought

A situation that still gives the pair great delight was a situation Dommett found himself in, which led to a very profound thought. While with the Maasai Mara tribe in Kenya, Dommett was tasked with lion patrol, which meant spending the majority of a night (aside from the odd perimeter checks) in a shed, inhabited by rats.  “What I realised was, it would be better for me to die with lions, than sleep with rats,” he laughs.

One of the lessons Kumar took away from the show was that technological innovations have made things more difficult them. He cites the Mexican ultra marathon as an example, explaining that they run 30 miles over rocky terrain with shoes simply made from old tires and string. Both also fondly remember how genuine the tribe’s people were and how happy they were that the two were immersing themselves in their life and culture.

“It’s the best thing I have ever done in my life; it’s the most incredible experience I have ever had in my life. I feel like on a number of levels it has left a permanent mark on me, in a positive way,” Kumar says. The show made him think more about the impact his life has on his surroundings.

Dommett was blown away by how happy everyone was, “No one wanted a more complicated life … they wake up and do the chores that need to be done and then spend the rest of the day with their family”.

It’s not that tribal people don’t know what is happening around them and about advances in technology; it is by choice that they remain in the life that they do, “where they have freedom and don’t have to answer to anyone”.

Ending on a funny note both say that fermented yak’s milk will haunt them for the rest of their lives and that “reconnecting with Instagram was the happiest they’d ever been.