Gareth Cliff on lessons learnt, the SABC and Bell Pottinger The Association for Communication and Advertising (ACA) recently held its Apex Masterclass, bringing together industry players and experts from the marketing, communications and advertising sectors.

One of the speakers at the gathering was media personality, entrepreneur and founder of CliffCentral, Gareth Cliff. He spoke on a variety of topics from why he left the SABC and the lessons he’s learnt from three years of running CliffCentral to his views on Donald Trump and Bell Pottinger.

Cliff prefaced his talk with some good news for attendees: “Nobody really knows. And I think if anyone claims to, you should treat them with a great deal of suspicion. The big picture certainly, they can know parts of it, but none of us know the whole story and it’s evolving so quickly, much like the news cycle, that what you know now is just about out of date by next week.”

The champion of audio

Touting himself and his presentation as a “champion of audio” Cliff espoused the benefits of the medium, particularly highlighting it as the one place where long-form journalism or storytelling can still be utilised effectively. “We have a hard-wired evolutionary predisposition to taking in information, whether it’s information, entertainment, news, or gossip, by listening. For 100 000 years, that’s the best way to communicate with someone,” he says adding people can listen to audio while doing other things.

Cliff delivered four lessons he has learnt during his time at the helm of CliffCentral, starting with authenticity. “It’s a big part of CliffCentral, because that’s what I care about. I have never been very good at pretending to care about things that I don’t care about and dramatising stuff that isn’t dramatic and I’ve never really had much time for political correctness,” he says.

“Audiences online can immediately smell when you are selling them nonsense. And they don’t come back after that. You lose them once and you’ve lost them”.

As long as you don’t sell them rubbish then podcast audiences can be incredibly loyal, Cliff reckons. CliffCentral’s audiences are an example of this, as they have been increasing incrementally not exponentially. “Incrementally is almost a greater endorsement of what you are doing by the audience because it means those people are telling other people and they’re telling other people and it is spreading by word of mouth, rather than it is just a trend”.

An example of someone who is doing communication right, Cliff believes, is US President Donald Trump. “Perhaps the President of the United States is a reprehensible person, but he should be some kind of a template for anybody who wants to get an idea across … Watch him take CNN down to absolute nonsense and rubbish and make it worthless by the end of his term.”

Niche is better than mass

His second lesson was that brands can no longer do the hard sell anymore, forcing their branding, product, logo and/or service into people’s lives. “They’ve got to want it. Years ago we would programme to a target audience and you’d hopefully hit the sweet spot. Today the audience chooses you as a content producer and they come to you as they care about the content you deliver,” he says.

Cliff compared this to fish jumping into the boat, rather than a brand out there fishing for attention, and reckons quality, relatable content is key to keeping them coming back. This, he believes, has led to a need for a change in mindset. “Niche audiences are more valuable and you should pay a premium for them, because you are going to get what you want, than a broad, mainstream, reach audience,” says Cliff.

The activation of imagination

The importance of storytelling was Cliff’s third lesson. “Particularly with audio, you can tell one story to 100 000 people and they all see a different picture. The activation of imagination is something the other senses can’t put together on their own… and it’s personal when it’s like that as sometimes you are in the story”.

In an age of big data this can be problematic for brands as they may lose the human element by constantly focusing on the numbers. Cliff’s advice, “In an abundance of big data we tend to become statisticians. I do feel we lose the human element of why we are in marketing, advertising, media, broadcasting. You’re in it to connect to someone and that can’t be reduced to figures.”

The fourth lesson that Cliff wanted to share was that relevance matters. “Often we fall short of this in South Africa as we tend to focus on what is trending at that moment or what we think is the real political story that people care about.”

He used the Bell Pottinger debacle as an example of this. “Look how we were all duped by Bell Pottinger. We’re actually a real bunch of fucking idiots, if you ask me. To have this PR company from Britain write a script and for all of us to play along like mindless extras is embarrassing to the nth degree and what it proves is that it’s not just about marketing,” he says.

“It’s about understanding how to divide people and how to prejudice them against each other and how to hurt them and appeal to their base nature. And if they got that better than us in offices in London we really need to look in the mirror a little bit more. We were completely confused. We found ourselves like chickens without heads, running around, believing in that nonsense”.

Why he left SABC

When he left SABC radio three years ago to start CliffCentral, Cliff was asked by many people why he was leaving. This question was asked again at the Masterclass and Cliff was as frank and honest as he has always been. He cited four reasons:

Cliff was critical of the SABC. “I can’t work for anybody anymore because the people I work for are absolutely much dumber than all the people who work for them, especially at the SABC. It’s an insult to your intelligence to have bosses like I had at the SABC even if you’re not intelligent. That’s how bad they are.” 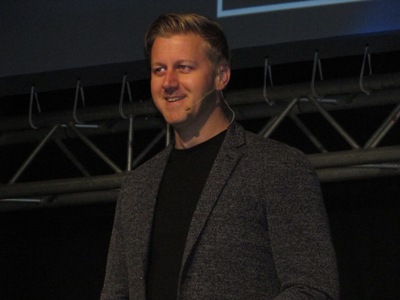 Cliff’s had a powerful takeaway message for attendees. “Let’s keep doing what we’re doing, we’re moving in the right direction. Don’t fear too much of the nay-saying about how everything is failing. The distribution mechanism may have changed, but the ability to tell a good story and the ability to engage an audience is something that certain people have always had and certain people will always have. And we shouldn’t all feel like we have to drop everything and move to here, but at the same time we cannot stay where we are without starting to look at what else is being developed.”