LATEST NEWS
Home News Media Mecca Should we be worried about Generation Z joining the workforce? Here’s why not

Should we be worried about Generation Z joining the workforce? Here’s why not 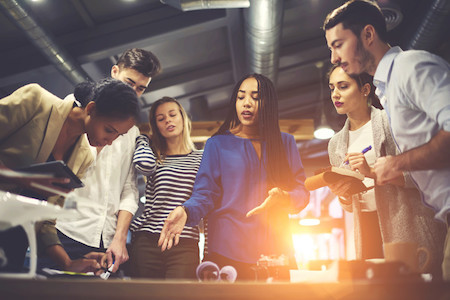 In the next year or two, the workplace faces an unprecedented situation where for the first time, due to the fact that we’re all living longer, five generations may be working side by side: Veterans (pre-World War II); the Baby Boomers (World War II – 1960s); Generation X (mid-60s – late 1970s); Millennials (aka Generation Y) (1979 – 1991); and last, but not least, the largely unknown factor: Generation Z, born after 1992.

It’s estimated that there are more than 2 billion of Gen Z worldwide. In South Africa, a third of the population is under the age of 21.

It may be too soon to be definitive about the characteristics of this generation, but they are said to be realistic, cause and value driven, entrepreneurial, financially prudent, and have boundless curiosity.

This is the first generation born into a fully technological environment – a world of being connected, being digital, and having mobile phones or tablets as a matter of course . They’re therefore more advanced in searching for information and figuring things out on their own.

It’s said that Generation Z will have jobs that have not even been created yet. But that’s not the only thing we aren’t sure of. Although there’s some indication of who they are and the influences shaping them, their characters are still forming and their role in the workplace is yet to take shape.

And, let’s face it: organisations are still struggling to analyse the challenge that Millennials pose in the workplace. These include fitting in with organisational culture, their communication style preferences and negative stereotypes of each generation. All these need to be managed in the workplace.

What exactly are they going to do when Generation Z arrives?

Popular wisdom argues for a fairly predictable set of approaches – all of which are wise. And increasingly people are understanding that while there are important differences between generations, they can be complementary and there is a significant opportunity for both ends of the age spectrum to learn from each other.

The gist of tried and tested approaches is to:

It has also been well argued that managers should take the lead in adapting their management style rather than expecting staff to change.

The crucial bridge for Generation Z

But just how different will Generation Z really be? The Millennials (aka Generation Y) has been described more than once as “Generation X on steroids”. All indications are that Generation Z will take this up a notch. Emma Davies, human resources manager for South African construction company ALEC, says the organisation has already experienced this to some extent with work experience students:

They are a very politically aware generation, and they have been taught to question everything, but to do so respectfully. The toddler stage of asking ‘why?’ does not end!

Both inside and outside the workplace, listening skills, patience, tolerance and humility will become more and more crucial for older generations. And two-way mentorship will become even more important than it has been with Millennials.

Generation Y has already pointed to some important changes that need to happen. Because they want involvement and feedback and are generally outspoken they have played a role in creating a more inclusive workplace as teamwork has become central to their work life.

This will be a crucial tool in making the most of the skills of Generation Z. This, combined with their strong communication skills and self-awareness, will emphasise the importance of teamwork.

These integration skills may prove crucial in helping to manage Generation Zs. Millennials, in this sense, may function as a bridge. This isn’t to say it will all be plain sailing, even if older employees are patient and ready to learn from the youngsters.

Generation Y and Z’s desire for connectedness and relationships on the part can be used for more successful mentorships. A desire for learning could also help alleviate tension with Generation Xs, Baby Boomers and Veterans, who may otherwise experience them as disrespectful or arrogant.

Focus on the similarities

But stereotyping needs to be avoided. South African organisations are very familiar with the effects that negative racial stereotyping can have on teams and productivity. They need to guard against the same thing happening with different generations. By fixating on minor differences and taking them out of context, and by failing to appreciate similarities, organisations could be missing an opportunity.

More than that, the differences between generations might be smaller than we think. Research from the University of North Carolina showed that Millennials want the same things as Generation X and Baby Boomers: challenging, meaningful work; opportunities for learning, development and advancement; support to successfully integrate work and personal life; fair treatment and competitive compensation.

And all three generations agreed on the characteristics of an ideal leader – a person who leads by example, is accessible, acts as a coach and mentor, helps employees see how their roles contribute to the organisation, and challenges others and holds them accountable.

The chances are, Generation Z won’t be too far off this mark either.

Respect and common sense is key

Implicit in this list of characteristics of the ideal leader is respect – of self and others. In business, as in life, the fundamentals of mutual respect go a long way in building positive workplace cultures. Respect will be key in managing multiple generations too.

All that’s really needed is a commonsense approach that maintains a focus on individual needs, honours each person’s contribution, and strives to keep older workers engaged alongside newer hires so as to avoid losing institutional knowledge.

It may also help to remember that each generational shift evolves organically – and so, too, will the workplace, if we are open to allowing it to do so.