Posted By: Michael Bratton: August 28, 2017In: Out of Home
Print Email 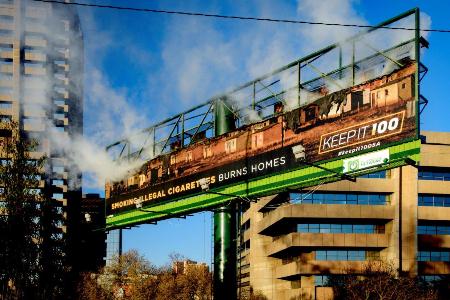 OOH CASE STUDY: Johannesburg commuters driving along Barry Hertzog and Empire Road may have been shocked this past week to see a billboard on fire. While this was the perception created, the smoke was actually part of a British American Tobacco South Africa (BATSA) campaign highlighting the dangers of illegal cigarettes. Michael Bratt spoke to Outdoor Network, whose structure the advert was placed on, and Joe Public, the creative agency behind the marketing campaign, to find out more.

A part of BATSA’s broader ‘Keep It 100’ campaign, the tagline for this advert, ‘Smoking illegal cigarettes burns homes’ has a dual meaning. It can be taken literally but also implies that households will be affected because illegal cigarette manufacturers do not pay taxes and therefore stunt social development. The aim of the campaign is to alert consumers to the fact that smoking illegal cigarettes can have dire consequences for both families and the country as a whole.

Patrick Michel De Robillard, head of sales at Outdoor Network, says from the get go, his team thought it was awesome, “an opportunity to really light up the sky and show how powerful our media can be when used as a platform for great creative concepts”.

Several factors had to be considered when selecting its location, ranging from the technical application, health and safety, and most importantly the prominence and position of the site, in terms of the volume and scope of audiences delivered. According to Roadside Outdoor Audience Data (ROAD) this site reached 583 075 commuters, with 3 338 136 impacts and an average frequency of six per month (which amounts to approximately 6% of Gauteng’s population).

“These types of executions transform a static billboard into a type of activation, which extends the reach and impact of the message to a broader audience. It also assists to both help an audience engage and easily recall the media. At Outdoor Network, we love unique and creative executions as they promote the platforms and demonstrate return on investment which will ultimately help grow spend in our sector,” De Robillard says.

The agency behind the creative

Joe Public United was the agency tasked with the creative of the campaign. The project was an integrated one by four agencies in the Group’s stable, namely Joe Public Ignite, Joe Public, Joe Public Connect and Joe Public Engage. Commenting on the brief given to them, Mpume Ngobese, business unit director at Joe Public United, says, “The brief was to raise awareness regarding the negative effects that illegal cigarette trade has on the economy, and to discourage the selling and buying of these cigarettes, within the strict legal parameters which prohibit advertising of legal cigarettes. So our concept had to work within the legal framework while ensuring originality, disruption and boldness.”

He adds, “The vision was to raise consciousness and ignite a conversation around the threat that illegal cigarette trading has to the socio-economic wellbeing of the country. So we had to appeal to civic mindedness in order to drive the point home.”

Beith Digital was also part of the execution of this campaign.

Getting approval for such a technical operation

With special effects including smoke being part of the creative, all those involved needed to get approval from the City of Joburg for this project. This took about a month but Manuel Lopes, group production head of Joe Public United says it was a relatively easy process, “We understood exactly what the concerns would be and our presentation to the authorities pre-empted all questions and concerns. Although easy, it was not cheap. The authorities were incredibly helpful and enthusiastic and proved supportive throughout both the approval and implementation process.” During the week the billboard was manned by a special effects crew and a health and safety representative. It will now be replaced by a static billboard for a month to reinforce the message.

The billboard certainly got people talking with talk shows being inundated with calls from the public that a billboard was on fire, the press arriving at the site believing that it was a real fire, social media vigorously discussing the project, and many mainstream publications covering the campaign. Only two complaints were received, which Lopes says were immediately replied to with total transparency and sharing of all approvals and material specs.

When asked how good creative can have such great impact Lopes says, “OOH done bravely and followed through is very, very impactful. We learnt this during the heady days of the 2010 World Cup. Unfortunately the massive centralisation of OOH holdings with a fewer larger outdoor owners and current large Corporate Procurement Policies, OOH as well as other mediums are not being exploited to the fullest with many great concepts falling prey to ‘safe’ solutions that require less effort and risk.

“OOH currently falls prey to the wallpaper syndrome with large amounts of media monies being spent on holdings flighting concepts for way too long in order to save production spend. In the short term this does not affect site owners’ revenues, but in the long term, with lack of returns for investment, marketing budgets will more and more be diverted to other mediums that offer more value. We should all encourage innovation in OOH, not just site bookings.”

Lopes reveals that at the onset of the project, Joe Public United with its partners approached five media owners via the ‘normal’ sales channels and every one of them turned it down as  ‘not possible’. “We then approached the challenge through technical teams and the project got traction. Within three weeks we had tied it all up. At the peak of the campaign, a number of outdoor owners called to either congratulate the team on an excellent concept and execution or lament the lost opportunity in not going with the idea when offered to them,” he explains.

This is an example of how out-of-the-box thinking and creative can go a long way towards increasing impact, recall and engagement simultaneously; it can cause an advertising campaign to soar. It certainly got people talking and while it was technically complex and required a lot of hard work to make it happen, the payoff at the end of the day seems to be worth it.