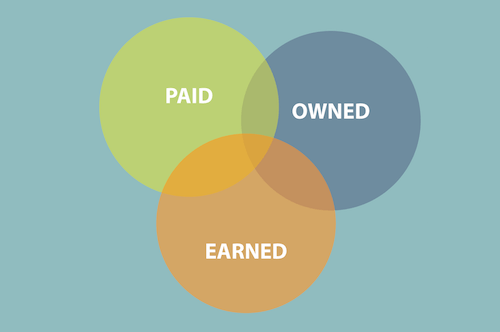 In marketing circles, the current construct for developing a strategy revolves around paid, earned and owned media.

This is a useful model to start with, but  it doesn’t provide enough granularity around timing. A strong strategy for marketing campaign development requires you think how these three areas interact and at what time you should be launching each phase.

Conventional thinking requires you begin with owned media, where you have the most control. You need it to be clear and concise, yet inclusive of all your key messaging. Your owned platform becomes the launching point for everything else you are going to be doing.

Where you go next is up for some debate. Most people will say you should move to earned media as your second stage of campaign launch. The earned media channels, primarily social in nature, become a place where you can gain some reach and generate interest in your content that was originally launched through your paid channels.

Earned media should also encompass your SEO efforts and any partner or channel marketing you can generate, if you’re in a position to do so. I say that because not every product or service has a strong partner channel to work with, and in many cases, they can’t create one until they generate some traction. That’s why it’s also important to consider paid media at this time – to stoke the fires and generate some initial buzz.

Paid media gets a bad rap because most paid media in the digital space is evaluated on antiquated metrics directly tied to acquisition. For good reason, many advertisers look at paid media as a means of generating clicks, downloads or installs. It is viewed as a direct-response medium still, but it’s also a great way to generate inexpensive reach and create awareness with a simple story. Reach and exposure to a message can go a long way toward delivering legitimacy to a brand.

The challenge is, you have to tolerate that period where it feels like you may be “wasting money.” Let’s face facts: Few to none brand-new campaigns for a previously nonexistent product will generate trial and sales out of the gate. You need to create a brand that people trust before they are willing to give you money. That, or you need to be piggy-backing on a current trend with a less expensive alternative to the best brands that are driving that category’s growth already.

The question here is, when do you ratchet down your paid media awareness efforts to be offset by revenue-driving, more DR-oriented campaigns? That is where the art and science intersect.

I don’t have an answer for you here. You have to be evaluating the overall traffic you are driving, the buzz you are creating and the conversion to test or trial customers you may be generating.

This is at least applicable in a SaaS or software market. As it pertains to CPG or other more consumer-focused efforts, it’s a different story. Sometimes it takes years to build a brand that can stand on its own, so it’s possible you never turn off that awareness effort.

The opposing point of view is that you can grow only using owned and earned media. It’s a nice story, and for a few categories here and there it might be true — but for the most part, it isn’t realistic. You need all three initiatives in order to make your business work.

How are you using paid, earned and owned? What is the strategy you employ to make a campaign work?

Cory Treffiletti (@ctreff) is CMO at Voicera. This story was first published by MediaPost.com and is republished here with the permission of the author.