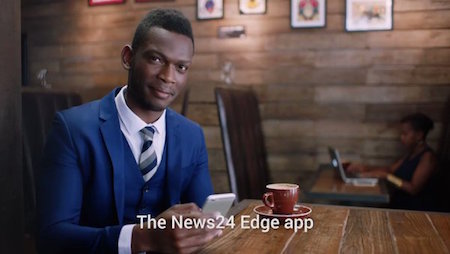 News24 was named as the winner in the Best News Mobile Services category at this year’s World Digital Media Awards, held in Berlin.

The South African news organisation’s mobile offering, News24 Edge, competed against the winners of this category from all over the world, including the Middle East, Europe, North America, Latin America, South Asia and Asia.

Tailoring experiences for the user

“Personalisation has been talked about and tried for as long as digital publishing exists, but with disappointing results,” says Andreij Horn, head of 24.com. “Machine learning and artificial intelligence now makes it possible to deliver effectively on this promise. Our engineers and data scientists created an app that tracks user behaviour and recommends stories in the home stream based on each user’s consumption patterns.”

A focus on the user experience

News24’s strategy falls into a trend seen by all of the other award winners at the World Digital Media Awards, with its focus by publishers on the overall user experience.

Nick Tjaardstra, director of Global Advisory for the World Association of News Publishers (WAN-IFRA) illustrated this using other examples of winners. “The www.kk.no experience recreates a magazine feel and the parallax scrolling ad units blend in – adding to a feeling of quality. Grupo América’s UNO has a UX tailored to each platform (e.g. Snapchat) and the content that works best – whether short videos, animated GIF, illustrations or memes. The NY Times’ Rio Olympics site was slick in its own way – going beyond a mere stream of articles, and seamlessly blending in medal tables and other features as you scroll down,” he explains.

Horn says 24.com respects the fact that readers are starved of time. “… while our nationwide team of journalists produce reams and reams of solid, quality content, not all of it is of interest to every user. This app makes it easier for our users to find the stuff they want to read – saving them time,” he says.

Another notable feature for most of the winners is the presence of an in-house cross-functional development teams. “We know about the Guardian, but also guys like Arte Radio Televisivo Argentina SA worked with their editorial and tech teams intensively for a year to create their Todo Noticias mobile app,” says Tjaardstra.

Of course, what aided many of the winners is their big budgets. But Tjaardstra says a few bucked this trend, including R.AGE, which he describes as “more than just reporting” and “what happens when you work with your readers to actually change something”.

Project: //www.theguardian.com/. Constant investment of resources and imagination have paid off once again for the Guardian News & Media, UK, and its flagship site, theguardian.com

Project: Rio Olympics website – The New York Times created a microsite for their broad coverage of the Rio games that included a vast array of content – text, images, graphics, videos and more – covering all aspects of the event.

Project: Belt and Road Initiative – There are many projects being set up as part of the One Belt One Road initiative that are instigating an infrastructure building-boom across Central Asia and into Europe as well as Southeast Asia and the east coast of Africa. Some 65 countries are involved and there are some US$ 1.3 trillion worth of projects already under way. South China Morning Post published its project to coincide with Beijing’s 15 May Belt and Road Forum where 28 heads of state and government were in attendance for President Xi to outline his ambitious plans and targets.

Projects: News24 Edge is the personalised news app from South African online publication News 24. With content pulled from News24.com’s business, leisure, and lifestyle brands, the app allows users to choose the lifestyle areas that they’re most interested in, while continuing to deliver daily breaking news.

Running as an activity has become very popular in Hong Kong, with more and more people joining marathon or running competitions. HK01 came up with the idea to have their photographers take photos of as many participants as possible and upload to their website, identifying them by the number plates pinned on their shirts. Participants can access their photos by using their competition number. HK01 offers this service free to attract people to join their membership through the mobile app.

A multidisciplinary and agile 10 people team experiments obsessively. They also collaborate with other media (Chequeado, Anfibia, Google, etc) to create new storytelling formats. UNO does not use traditional advertising, but works with brands to create branded content.

Project: www.KK.no – The oldest women’s title in Norway showed it has a full hand of new cards as Aller Media’s www.KK.no won with a visually compelling full-screen approach.

R.AGE, the youth section of a major newspaper in Malaysia, decided to get rid of their print section in order to produce in-depth, investigative web documentaries. Each of their documentaries has a call-to-action, allowing the viewer to get involved in solving the issue explored in the documentary. In the past year, they have averaged 550,000 views a month.

The World Digital Media Awards recognise publishers who have adopted digital media and mobile strategies as part of their offering to meet the major changes in how people consume news and information today. They were created by WAN-IFRA.