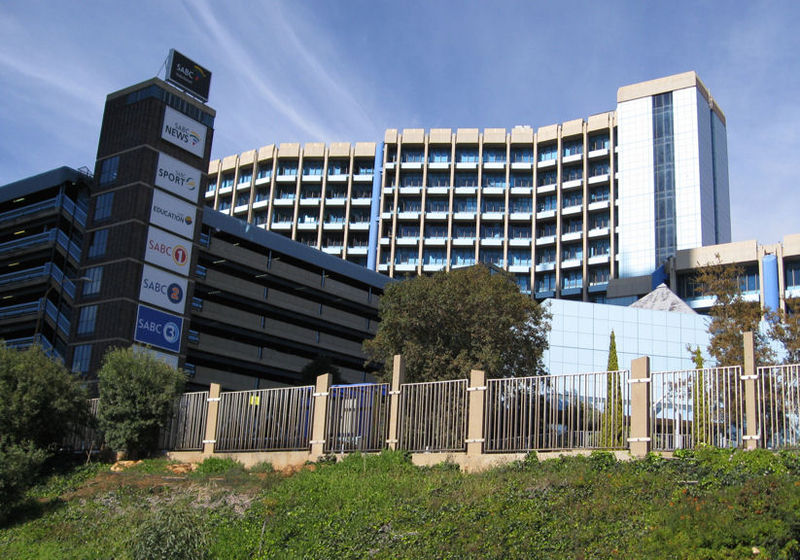 A dispute has arisen between the SABC and Minister of Communications Mmamoloko Kubayi-Ngubane, with the latter seemingly overstepping boundaries drawn by an interim court order that set out how key executive appointments should be made.

This contradicts an interim court order by Judge Elias Matojane last year, which allows the SABC board to independently make executive appointments, but only after consulting with the minister. The order did not give her veto power over the appointments.

The problem comes with the definition of ‘consulting’ in the above statement, said broadcasting researcher and policy analyst Kate Skinner. “The problem is the minister has made quite strong claims that she has more power and has said that government plays a major role in SABC appointments and it needs to be accepted by cabinet as the SABC is a state owned enterprise. The problem is that SABC is not a normal state owned enterprise and she doesn’t have veto power over the executive appointments … Of course she must be consulted, but she can’t be making the final decision,” Skinner said.

Skinner explained in layman’s terms that consultation with the minister could take various forms. This included asking her what type of person she thought would be good for the position and whether she had any candidates in mind. “The board would seek this type of information from various stakeholders, including the minister, and then decide for themselves what advice to take and what advice not to take. The minister can’t insist that whoever she wants appointed is appointed. She can only put forward her views, the board considers those views, and then decides what it’s going to do as it ultimately has the final decision making power,” she added.

The public broadcaster released a statement after the comments made by the minister. SABC board chairperson Bongumusa Makhathini updated the public on the progress of the executive appointments. “The board wishes to state for the record that it has acted and will continue to act lawfully, and in line with the letter and spirit of the interim court order, on this matter. This includes the requirement of consultations with the shareholder representative (the minister).

“The interim court order gives clarity on the board’s responsibilities in making SABC executive appointments. The recruitment of executives (CEO, COO and CFO) is one of the SABC board’s urgent priorities, and the processes are in progress and on track. The appointment of the successful candidate for COO is still being finalised, and the positions of CEO and CFO advertised.”

Further clarification on the process

Democratic Alliance MP Phumzile van Damme attempted to clarify the situation in a series of tweets. Here is what she had to say: 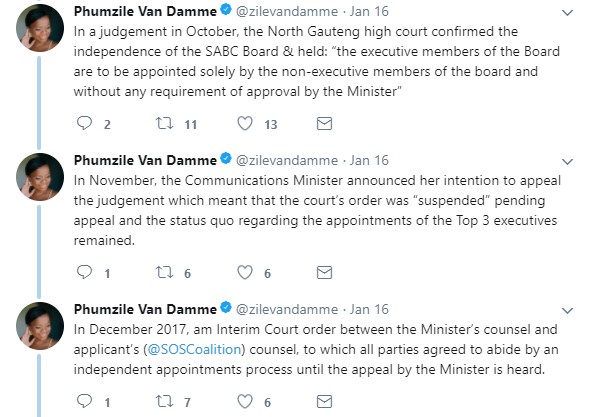 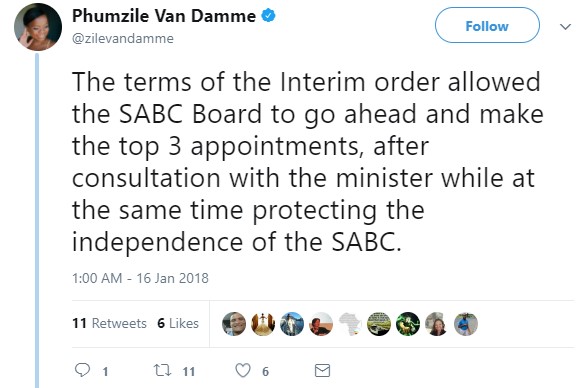 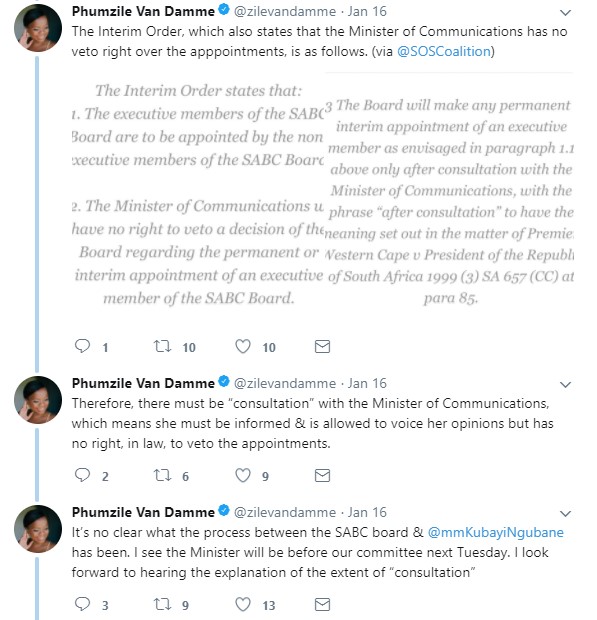 The minister has already indicated that she will be challenging the interim court order, so the situation may change in future if the decision is reversed.

If media reports, citing inside sources, are to be believed a new chief operations officer has already been picked, with former eNCA current affairs anchor Chris Maroleng being named as the chosen candidate. However, this has not been officially confirmed by the SABC.

Whether Maroleng has been appointed or not, making these executive appointments timeously is a critical step for the SABC as it continues on its road to recovery.