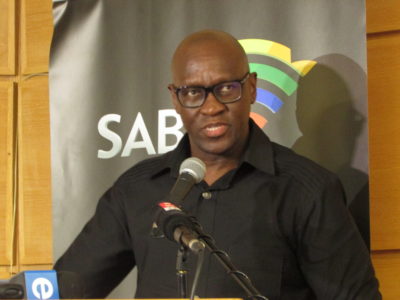 
While the SABC is seeing positive signs from its turnaround plan, several negative factors have the public broadcaster fighting to get out of a massive financial hole.

These include shortfalls in projected revenue across different streams, fixed costs (such as signal distribution and broadcast costs), an unfunded public mandate, and a wage bill that has ballooned significantly over the past few years. For the latter, the 2016/17 financial year was crucial, as revenue dropped massively while wages still increased in line with CPI.

This, and much more, was outlined in a media briefing held on Wednesday, the purpose of which was to clarify where the SABC is currently at from a financial perspective, unpack the actions already taken to save costs and make the public broadcaster more effective and efficient, and to address the Section 189 situation.

SABC group chief executive officer Madoda Mxakwe commented that “several green shoots are already being seen”, and revealed that, “one of the key aspects of the turnaround plan is to accelerate revenue generation” through growing the business and diversifying its revenue streams.

Currently, 85% of the public broadcaster’s revenue comes from advertising, and as part of the strategy, unique retention plans for clients have been developed and executed, work has been done on lapsed contracts, and a strong new business acquisition drive is taking effect.

This is coupled with significant growth year on year in TV license fee collections, though this only accounts for 14% of SABC revenue and won’t make a significant difference.

“The positive growth trajectory that we’ve seen in quarter two does indicate that a lot of the plans that have been put in place are beginning to bear fruit,” Mxakwe said.

According to Mxakwe, SABC revenue (to date) sits at R3.2 billion, while all the aggressive cost cutting measures across the organisation have led to total expenditure (to date) of R3.5 billion. The saving in the past two quarters amounts to R463 million.

Still running at a significant loss

“However, unfortunately all of the efforts we are doing, are not enough because if you look at our net loss, year to date, we’re sitting at about R323 million, and the focus loss for the financial year would then be at R805 million,” Mxakwe added. He also pointed to the fact that the SABC was technically insolvent as it cannot meet its monthly financial obligations.

Forecasts for the rest of the year paint a mixed picture. A R570 million shortfall in revenue is expected, driven by shortfalls of R219 million from advertising revenue, R107 million in TV license fees, and R180 million in content exploitation. But the forecast is R263 million higher than revenue actually achieved in the previous (2017/18) financial year. A startling revelation was made by SABC chief financial officer, Yolande van Biljon (left), that two of SABC’s television channels, SABC 2 and SABC 3, are not contributing financially as expected.

“This is to a large extent driven by the fact that we are unable to secure sufficient content and content of a quality that is required for these stations. It’s also a legacy of the past, as typically you need to invest in this content up to 18 months before you need to broadcast, and our financial situation has not allowed us to do this,” she explained.

The poor performance of the two channels forced management to revise downward revenue forecasts for them by R311 million for the year.

“Approximately 80% of revenue derived from TV is garnered from around six shows on our platforms, and they are mostly on SABC 1. We have the ability in a day to maximise revenue in four hours in the day, prime-time. What we should be looking at is not cutting down on content that brings audiences and revenue, but what we’re looking at is securing content around commercial enterprises and smart partnerships,” added SABC chief operating officer, Chris Maroleng.

The other problem is that, due to financial constraints, not enough marketing is being done around SABC’s radio stations and television properties in order to attract advertisers and listeners/viewers.

The public broadcaster’s wage bill has placed a massive strain on the organisation, not helped by illegal appointments and irregular raises and bonuses that occurred in the past, as well as wage increases every year even if revenue ran at a loss.

The SABC wage bill is sitting at R3.1 billion, while expenditure is at R7.2 billion. “This is not sustainable, hence we have engaged with organised labour to see ways in which we can review our structure,” Mxakwe commented.

He also dispelled the myth that the majority of the wage bill sits at a senior level. The total cost to company of the three executive directors stands at R12.5 million, 0.4% of the overall wage bill. The total cost to company of group executives is R25 million, and freelancer costs are around R500 million per annum. In the five layers of management (495 managers) that wage cost amounts to R630 million. Including junior managers, that number balloons to R1 billion per annum.

“Our wage bill does not allow us to benefit from all of the innovations we are doing in cost-containment and revenue maximisation. It is essential that we deal with this issue that causes a continuous hampering of the progress of the SABC on a financial sustainability and operational efficiency perspective,” he said.

To counter this, the SABC consulted with organised labour on 12 October, indicating that it would embark on a Section 189 process. While management stressed that this affected all employees, 981 have been identified for possible retrenchment, and out of 2 400 freelancers, 1 200 will be affected. Currently the SABC and organised labour are waiting on the appointment of a CCMA mediator. “The arrival at 981 staff was premised on a fit for purpose structure, which looks at spans and layers. In certain areas we found there were duplications, a permanent staff member doing a particular job and then three freelancers doing the same job,” revealed Jonathan Thekiso (left), SABC group executive for HR. He added that the criteria for keeping staff were twofold, firstly skills, qualifications and experience, and secondly, the last in first out principle.

At the same time as this action, the SABC would approach the Labour Court in a bid to recover R60 million that was paid during irregular appointments, raises and bonuses. Hlaudi Motsoeneng may be included in the R60 million, but the management team was very reluctant to divulge this, noting that a legal process was currently underway with the former chief operating officer. 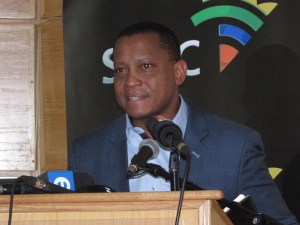 As with previous briefings, Maroleng (left) stressed two things. Firstly, the unfunded mandate the public broadcaster is tasked with, which historically is pegged at R4.2 billion and is forecast to grow to R6.7 billion.

Secondly, he touched on the re-look and different approach to the acquisition of sports rights which the public broadcaster has embarked on, with the SABC looking to secure mutually beneficial deals.

Van Biljon described the cost-cutting exercise as “everything from bringing legal services in-house, and re-looking and optimising how staff travel, to reducing fruitless and wasteful expenditure, and cost containment across all levels in the organisation. There’s no holy cows at this point in time.”

Operational efficiencies are being thoroughly explored, as is whether the broadcaster was fit for purpose and structured in the right way. “We’re driving down costs and clawing back on key aspects of revenue,” said Maroleng.

He concluded with a bold statement: “The three executive directors, myself included, do not take lightly the task that is ahead of us. We understand that as we talk about the opportunities that we must engage in, which relate to reducing our wage bill, that this has a direct impact on the people of our organisation. We don’t take this lightly.