Help the SABC, don’t undermine it 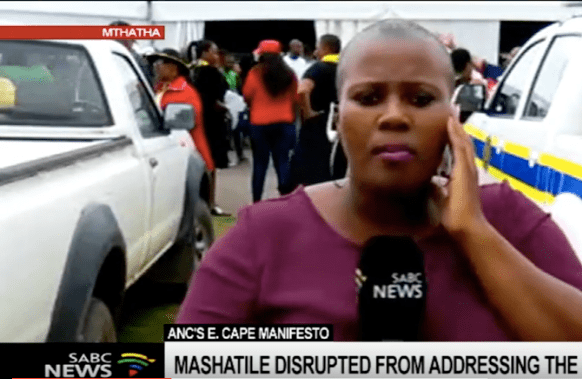 [COMMENT] This last weekend a government minister tried to prevent an SABC crew from reporting and filming people who held a divergent view at an ANC rally in the Eastern Cape.

Minister of Communications Stella Ndabeni-Abrahams sought to undermine our media freedom and our democracy in the lead-up to elections. We should all be angry, and we should all demand answers and accountability. This is also about more than one offensive action by a minister; it is about our ability as a country to host free, fair and credible elections.

When a person tries to prevent a journalist from doing their job it isn’t just an act of censorship, which itself is a violation of the right to freedom of expression, it is also an act that undermines our democracy. I know we are in an election season so we can expect big claims and large promises, but think about it: preventing a journalist from reporting undermines our democracy, there can be no democracy without a free media.

The media has great power to shape narratives and report on our society. As a result, it has almost always been a target for interference. It’s why the Nationalist Party wanted to control the SABC and other media, it’s why more recently Hlaudi Motsoeneng sought to ban violent public protests from being shown on SABC and it’s why the SABC 8 were threatened and harassed.

It’s also why so many of our veteran journalists risked their lives under apartheid to tell the world what was going on. Had the world not known about the 1976 uprisings, Sharpeville, or the death of Steve Biko, it is likely international pressure may not have been as committed.

The media are powerful and they shoulder great responsibility, and they are often their own worst enemy, but their credibility being undermined isn’t just bad for them and their reputation but for our democracy as well. However, all faults considered, the power and critical importance of our media to our democracy is as vital as free, fair and credible elections. We know that without our media, we wouldn’t have a state capture commission or SARS Inquiry, among others.

Currently, there is a range of threats to media freedom. Disinformation, where political actors seek to spread false information with an intent to harm and undermine our elections, is one clear emerging global threat.

We are also entering an elections period, we know the date, but we await merely the proclamation and then one of the core exercises of our democracy builds up to take place. We know in that period that tensions rise, that parties will go all out to persuade the public to vote for them and they will use just about any means to persuade us to vote for them but also not to vote for another party.

As tensions build the likelihood of violence increases. We know from previous experience that, where left unchecked and unengaged, tensions can escalate and lead to the loss of life. The IEC does what it can to help ensure a stable, fair environment and parties all agree to a code of conduct to ensure they play their part too in not escalating tensions.

The media too have a fundamental role to play in ensuring that they ask: “What does the public know and what do they need to know?” and reporting on parties, issues and the electoral process in a manner that ensures citizens can make informed choices and thus exercise their democratic rights. Each act of violence has personal catastrophic consequences for those involved but it also undermines our democracy.

We thus have to address any threats to media freedom as any such threats profoundly compromise our nation’s ability to ensure free, fair and credible elections. Currently, there is a range of threats to media freedom. Disinformation, where political actors seek to spread false information with an intent to harm and undermine our elections, is one clear emerging global threat.

Media Monitoring Africa is working with the IEC and other partners to help combat this threat – the subject of another column. The economic viability of our media and their sustainability is another clear threat to media freedom. Attacks on credibility and trust in media being undermined is a threat to media freedom. The viability of our public broadcaster is another.

We have known for over a year that the SABC’s financial situation is dire; in fact, the SABC board had announced in 2018 that they will cease to function by the end of March if they don’t get a government guarantee. Since July 2018 civil society has been pressing Parliament to appoint members to the SABC board; without sufficient numbers, the board is inquorate and cannot make decisions.

So the biggest broadcaster in our country, with the biggest audiences, is on the verge of collapse just in time for 2019 elections.

* Opinions published on The Media Online are not necessarily those of Wag the Dog or the editor but contribute to the diversity of voices in South Africa.