PHD, part of Omnicom Media Group, was chosen as Campaign’s inaugural EMEA Media Network of the Year 2018, following a year which saw the agency win 132 pitches across the region, onboard 275 new employees and win 73 industry awards.

Described by Campaign as “a clear winner”, PHD closed a stellar 2018, winning over $700 million in new business across EMEA, including HSBC, Oatly, VF Corporation Europe (which has a portfolio of brands including Timberland, The North Face and Vans) and Unilever across Sub-Saharan Africa. Additionally, PHD offices across EMEA picked up 73 industry awards, including five local Agency of the Year accolades in France, Ireland, Italy, Netherlands and Spain, and Campaign’s inaugural UK Media Leader of the Year, PHD Worldwide CEO, Mike Cooper. Since submission, PHD has also been named Media Network of the Year at Eurobest and Cristal Festival. The addition of 275 employees and three new offices has seen PHD EMEA grow to 2 630 across 58 offices in 47 countries, all operating under the mantra of “finding a better way”.

Rather than striving to be the biggest agency, PHD has focused on brilliant strategic thinking to drive client growth. Its success in industry awards underlines its reputation as one of the smartest and creative media networks in the world. One example is the launch of the Volkswagen T-Roc, which saw offices across EMEA localise the global comms strapline of “born confident” with great success in the UK, Italy, Spain and Ireland.

PHD’s strong culture also received high praised from the judging panel at Campaign, describing the agency’s employee engagement strategy as “on point”.  The key themes of openness and inclusion focused on initiatives around mental health awareness and disability awareness training, ensuring PHD is operating as an inclusive agency, opening its doors to the more diverse, creative and strategic talent in the industry.

Ogilvy SA had significant wins at the Creative Circle Awards 2018, as Ogilvy Cape Town was ranked top performer on the night with three category wins. Ogilvy Johannesburg placed second in the Agency of the Year rankings, as Ogilvy South Africa shared the Group of the Year gong with TBWA.

Ogilvy took home a total of eight awards on the evening.

The Overall Group award is a vote of confidence in the One Ogilvy process, which saw several divisions consolidated into a single entity, with one point of client contact. Ogilvy recently completed its Next Chapter refounding, expanding its capabilities across the entire marketing value chain through collaborative retail partnerships, growing the PR & Influence capability, and launching the social-media e-commerce division Social.Lab.

Ogilvy was recognised for winning work done for a broad range of clients – KFC, Carling Black Label, Kimberley-Clark and DSTV – in categories including PR and Media; Live; Out of Home; and Digital and Interactive. 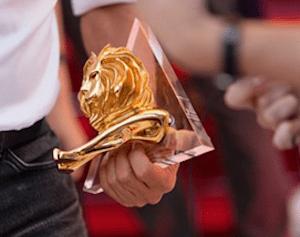 Are you creative, talented and capable of delivering a 60 second commercial under serious time pressure? Would you like to go to France for the Cannes Lions International Festival of Creativity, and have your work showcased on an international stage? Then read on…

Once again, Cinemark is the official representative in South Africa for the Cannes Lions International Festival of Creativity, which takes place from 19-21 June 2019. Cinemark is also sponsoring the local leg of the Film category of the Young Lions competition. As such, they are calling for registrations from teams comprising two young professionals or freelancers (an art director and a copywriter, both under the age of 30), who currently work as art directors, producers, filmmakers or creatives.

Here’s how it works:

If your team wins the South African competition, the two of you will be flying to France to compete against other winning teams from around the world, in the global leg of the competition, at this year’s Cannes Festival. Not only that, but your local winning advert will reach an audience on Ster-Kinekor’s silver screens nationwide!

And, if you go on to win at Cannes, you’ll walk away with the prestigious honour of being crowned the Young Lions of Cannes 2019 – adding some serious bling to your CV and potentially kicking your career onto the fast-track.

Tempted? What ambitious young creative wouldn’t be? Enter now: registrations are open, so email younglions@sterkinekor.com and get your creativity ON.

Dare to dream, deign to deliver, and the glory could be yours. What are you waiting for?

WAN-IFRA, the World Association of Newspapers and News Publishers, is inviting entries for its 2nd annual Print Innovation Awards.

The competition celebrates the most innovative print ads as well as newspaper and magazine publishers’ products worldwide.

Entries can now be submitted here. The closing date for entries and upload of project files is 31 July 2019.

More information about the awards can be found, here.

The awards will be presented in Berlin on the first exhibition day of the IFRA World Publishing Expo, on 8 October 2019.

Felix & Paul Studios, the EMMY Award-winning creator of immersive entertainment experiences, has been nominated for a 2019 Daytime EMMY Award for Oustanding Interactive Program, for its virtual reality series, Space Explorers.

The program explores the dynamics of camaraderie among space programs around the world and the collaboration between public and private space agencies, and highlights the latest advancements and plans for deep space exploration.

More information about the future of Space Explorers is available at time.com/space.

The Breakfast Club on 947 received two nods for Breakfast Show and Content Producer.

The Money Show with Bruce Whitfield, on CapeTalk and 702,  once again received a nomination in the category for Business and Finance Show.

“We are impressed with the amount of nominations we have received as a group.  Not only have we succeeded on creating great content when it comes to programming but the judges noticed the work being put in by EWN as well.  Kfm’s excellent performance is testament to their positioning as Cape Town’s number one music radio station,” said Eric D’Oliveira, CEO of Primedia Broadcasting.

The big winners at Adfest

The Tokyo office of Dentsu won Agency of the Year at this year’s Adfest. Dentsu also won Network of the Year.

Mumbrella Asia has more information about the Adfest winners, here.