The room was packed to the rafters on Thursday at the IMC’s Marketing Gets Naked event as delegates stripped marketing down to its fundamentals.

The short format presentations (max 20 minutes) lent themselves to a wealth of information being dished out, as everything marketing related was explored. 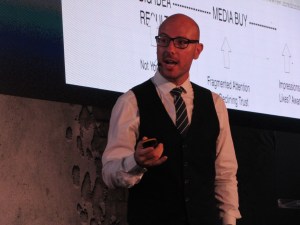 The first speaker was David Duarte (left), CEO of Treeshake, who talked about the tech and trends of marketing’s industrial revolution in 2019 and beyond, setting the scene with a broad overview.

“The media buy is in the context of fragmented attention and declining trust,” he said.

“And the results, which should be there… we’re probably measuring the wrong things. We’re measuring reach, awareness, and likes, but are we measuring impact?” he asked. He identified six challenges for ad agencies:

“Content is still cool, but connectivity is king… Attention is now more valuable than ever before, but it’s becoming expensive to acquire. We’re paying more money for less impact… In future, trust will be taking over from attention as the scarcest, most valuable commodity, being absolutely fundamental,” he added.

The key takeaway from Duarte’s talk was that advertising in the connected context was the shift from storytelling to story-making. He also stressed data ownership would be more effective in growing the market than breaking the Facebook/Google duopoly.

The unconscious versus conscious mind She took attendees inside the minds of consumers to explain the psychology of marketing, unpacking the surprising fact that the approach of most marketers is wrong and that there is a better one out there.

“We as marketers know nothing about how the minds works. We look at it as a black box and throw stuff up and it doesn’t hit, and then throw something else. It’s the shotgun approach as opposed to the rifle approach,” she said.

“It’s no surprise that CEOs have no respect for CMOs and marketers or trust them, because every time we do something historically it was completely unrepeatable and you couldn’t forecast it, because we’re working with the wrong models.”

Next up was Bongani Chinkanda, CEO of HDI Youth Consultancy, who offered delegates handy tips on how brands could ‘youthproof’ their future. 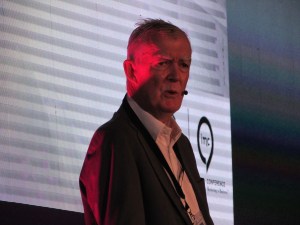 Marketer at Large, Andy Rice (left), stole the show with his Moment of Naked Truth slot. Even though it was only five minutes long, his impactful message resonated loud and large as he called out marketers and challenged them.

He started by labelling attendees as “a bunch of cowards”, “lily-livered scaredy cats”, “spineless wimps” and “a bunch of cream puffs”. Rice then challenged them to be bold and take risks.

“We don’t break enough rules. Take risks. Strip away our obsession with data. Replace our ‘infobesity’ with creative insights. Strip away programmatic buying and anything else that elevates bots above humans. Strip away the interference of the dreaded financial director and procurement and anyone else who doesn’t understand the difference between price and value. Strip away your imagination for the market leader. Don’t follow their lead, the markets got one already, they don’t need another one, differentiate!” he stressed. 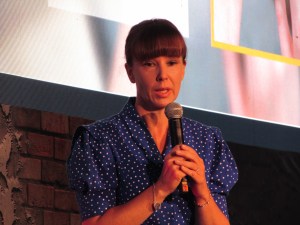 Next to take to the stage was Katherine Madley (left), marketing and customer director at MASSDISCOUNTS/Game and DIONWIRED.

Madley echoed Duarte’s sentiments, in that the wrong metrics were being measured in digital. “Many people measure soft metrics, unique visitors, page views and impressions; 80% of them are fake. Hard metrics, like sales, market share and share of voice, should be measured,” she explained.

Touching on the role of creativity and marketers in future, Madley said, “It’s time for creative people to stand up and come to the table at the board level/CEO level, because artificial intelligence and machine learning is going to flatten the playing field for everybody. There’s only going to be one thing left to chase for a competitive advantage, and it’s creativity.” 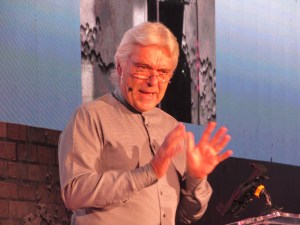 Greg Garden (left), CEO of the Marketing Association of South Africa, gave an update on its activities, including a study on the perceptions of CEOs in South Africa around marketing and marketers. He urged marketers to unite and called for them to support each other more (look out for our article next week, giving more details around his presentation). 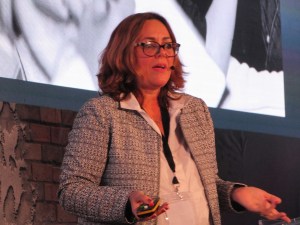 relationship between clients and creative agencies, comparing it to a marriage. Often, it all started out rosy, but things sour. Her advice to both parties was, “Double down on your relationship vows, focus on the product, and gift consumers with engaging, creative excellence.” 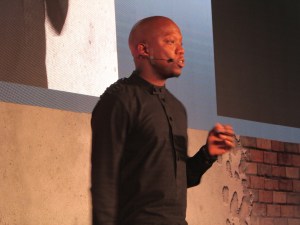 A rousing welcome was given to TouchHD founder Tbo Touch (left) who presented on creating brands in a competitive space. [Look out for our article next week giving a detailed breakdown of his talk], but the key takeaway was, “The success of any marketer out there is generally not in what you say about your product, but on the story you tell.”

A plethhora of speakers followed these presentations, as marketing was certainly stripped bare for all to see.