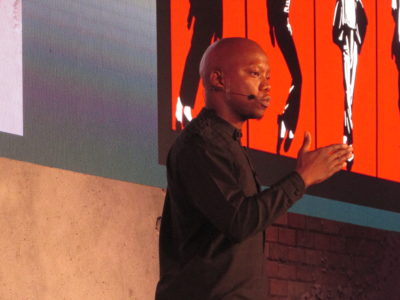 
Tbo Touch (real name Thabo Molefe) has launched a new video on demand offering, which will challenge the dominance of Netflix and Showmax in South Africa.

THD24 will focus primarily on local empowerment, including South African-focused content and job creation within the space.

How it came about

“A lot of VODs in the country have international movies and series, but where is job creation in all of that? We’re going to brag about our catalogue, but you have products that we saw on Ster-Kinekor and Box Office. So, I’m taking humble steps to say ‘all graduates from film schools, come into THD24. We’re going to create sitcoms, series, vodcasts’,” he explains.

The idea was sparked when Tbo Touch was filming a movie called Blessers. He noticed how 120 people had been hired around the project (caterers, gaffers, hair and make-up, wardrobe etc.).

“It’s all because of what I learned at Touch HD. Radio online is an expensive exercise when there’s free radio out there. But if you add an unique proposition, give high quality, cutting edge video, make it something different, then you have a different offering than what traditional is doing. So THD24 is the evolution of Touch HD,” he adds.

Rather than simply putting cameras in studio, which is what most people would expect from online radio moving into the online TV space, THD24 will be creating shows in remote locations.

“One of the shows is me interviewing people on the Gautrain. We’re coming to listeners with THD24. We’re not having another star, who you’ve heard the interview with on different radio platforms, you are the star, the audience is king today, because they are spoilt for choice,” Touch reveals.

A new direction for Touch HD

During his chat with The Media Online, Touch also gave an update on the strategy and direction of Touch HD. It has completely shifted its format from a live radio show platform to a podcast platform. 11 podcast shows covering different topics air, with an episode coming out each week.

“Live listening, we leave it to normal radio. Because as long as the terrestrial platforms are there, the masses will be there as there’s no burning of data. So there’s no point competing with a terrestrial platform when listeners are getting it for free. But the type of podcasts we’re offering, no traditional radio station will be having those conversations, because we have editorial freedom, while traditional stations are constrained by those who pay the cheques, which is holding media back,” he comments.

Asked about how he sees the future of broadcasting, and what will be different from how things are done now, Touch responds, “It will have nothing to do with the number of followers you have, or how many people like your posts. The future of broadcasting will be, any market you find yourself in and whatever form of message, if it doesn’t resonate with your audience, they are not going to tune in. Local content is on the rise.

“In South Africa we are beginning to appreciate our local content. That’s why Afrikaans movies outsell most movies on cinema. We’re not excited about Black Panther, as we’re excited about our own. We’re not going to lose our mind over content we don’t see ourselves in. It’s important for us to appreciate ourselves to such an extent that we’re even prepared to pay to go and see local content. Local used to come secondary, but now it is king.”