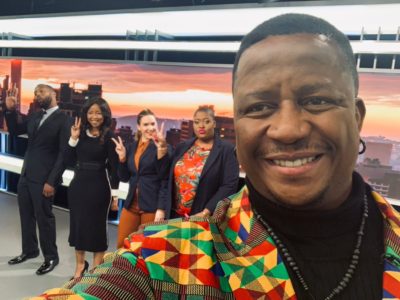 
Following the termination of his SABC, Thato Sikwane aka DJ Fresh, is moving on, announcing via Twitter that he is starting “a brand new show and chapter” on 1 August 2019.

While DJ Fresh didn’t share which media entity he will be a part of, speculation is bound to point towards Newzroom Afrika, with him appearing on their Breaking Dawn breakfast show yesterday morning just hours before the SABC announced his contract termination. Or joining Kaya FM, as another rumour had it.

The ‘Big Dawg’ seemed ecstatic over his dismissal from the public broadcaster, saying he felt “like I have been freed of a burdensome monkey on my back” and had “actually never been better”.

He elaborated on the behind the scenes goings-on with the Metro FM weekday breakfast show, describing his time at the station as “magical”, but adding that he was ready to leave in March. This was due to what Fresh described as the dismantling of the show, which had been “kick-ass” but “with no real, sensible reason given”.

DJ Fresh was taken off air by the SABC after he used bad language during his show while interacting with a caller. He told the person to “stop tweeting out your ass” and also uttered the word ‘msunery’, a colloquial descriptive word that, translated in English, refers to the female genitalia.

In his statement, DJ Fresh also unreservedly apologised for using the word,  promising to “do better next time”.

He also added, “I have no regrets about how this worked out, because I firmly believe that fair labour practice is about correction more than it is about being grossly punitive. As a  principle I would sooner walk away from a job (ANY JOB) than accept such abuse.”