A few brave broadcasters: The future of radio and broadcasting in South Africa 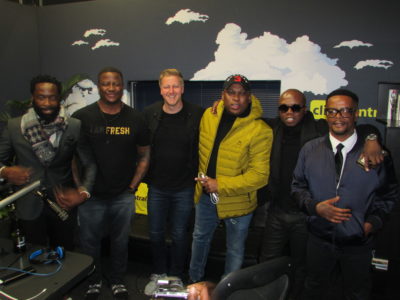 
The future of broadcasting was in the spotlight during a recent roundtable hosted by CliffCentral’s Gareth Cliff. Weighing in with their views were some serious radio industry heavyweights. Primedia Broadcasting’s DJ Fresh, THD24’s Tbo Touch, Massiv Metro’s DJ Sbu, and Marawa TV’s Robert Marawa were all on hand to add to the discussion.

Each shared a common thread; the fact that they are brave broadcasters who have disrupted the broadcasting space either through their own ventures or their movements.

Comedian Trevor Gumbi opened the discussion, giving a light-hearted (but oftentimes not PG) intro to each of the panellists before he was ‘fired’ from the conversation and removed from the proceedings.

The conversation kicked off with a background on each of the panellists and how they started their radio careers. Touch was a church boy, where he would constantly use a microphone, while Sbu hung around at YFM’s studios idolising Fresh.

“DJ Sbu has always been that guy that knows how to hang around strategically. So you see him, but he’s not in your face, and I think a lot of kids can learn from that. When you want to get into any industry, don’t be in people’s faces. Be almost just by the blindspot. So I see you, but you’re not a bother, that’s how you start getting into places,” commented Fresh.

For the first five years of his radio career, Fresh had no formal training. He credits listening to different stations growing up, as well as music cassettes that he used to make for his friend Oscar (on which he would intro songs), as the solid base for his later career.

Speaking on the unpredictability and volatility of presenter line-up shuffles, Fresh said, “Every March, there’s this madness that we must reshuffle and hire new people and fire people. But more often than not, people are being fired not based on ‘we gave you deliverables and all the tools you need and you didn’t deliver, therefore bye bye’; it’s almost as if people wake up on a whim and say ‘I don’t like Gareth today, he must go. My friend doesn’t like DJ Sbu anymore, so he must go’.”

The other panellists agreed, saying decisions were often political, not editorially justifiable, particularly in the case of the SABC. Tales of presenters showing up to work and their access cards not working or studios being locked were also mentioned. While a lot of SABC bashing occurred during the discussion, which was to be expected given the participants’ histories with the public broadcaster, Touch did admit, “The SABC played a big role in my life. It gave me the opportunity to change lives.”

Listeners loyal to presenters, not stations

The point was brought up that listeners are loyal to presenters, rather than radio stations, and if the presenter moves to another one, their followers will jump ship with them. Fresh agreed, citing his recent switch to Primedia’s 947 as a case in point.

“The one thing I’ve appreciated the most about the past eight weeks of madness (where he was suspended from Metro FM, his radio future was uncertain, SABC terminated his contract and it was announced he was heading to 947) is realising how many loyals I have. People who listened to me at YFM, who went to 5FM with me, who are saying ‘if you go to Classic FM, we’re there, because we’re loyal to your brand of radio, not a radio station’… I could broadcast from a cave and my people will find me,” he said.

Social media has created a direct channel between presenters and their audience, leading to stronger relationships which extend beyond the radio station. However, whereas before it sat outside the realm of the station, nowadays social media behaviour of presenters is included in contracts.

The ability of the medium to affect change in people’s lives is one of the reasons given why all of the panellists love radio.

“I modelled my career around purpose and it’s something that’s stuck with me in every decision I make even in business right now,” said DJ Sbu. “It has to be inspired by purpose. And radio was able to give me that immediate contact with either the people I wanted to help or connecting with others who could help.”

Dancing on a moving carpet

Cliff described broadcasting as dancing on a moving carpet, as things were constantly changing under your feet. Asked what they disliked about the changes taking place, Sbu lamented the new generation of social media stars.

“I respect new talent and new ways of hustling and doing things. I don’t expect the current generation to work as hard as we did, as they’ve got technology on their side and they can hustle smarter… But one of the things I don’t like right now is people being hired just because they’ve got a good social media presence. We’re not getting a lot of good quality talent on the radio,” he explained.

All the panellists agreed that success in broadcasting came down to hard work and the hours you put in.

“People will follow us because of the amount of work we put into our show. We don’t just wake up and get to the studio and just start talking … You’ve been thinking and planning and well researched,” commented Touch.

After the roundtable, the panellists spoke to The Media Online about their new ventures, and what they see as the biggest disruptors to broadcasting. Here are those conversations:

To listen to or watch the full conversation, click here.