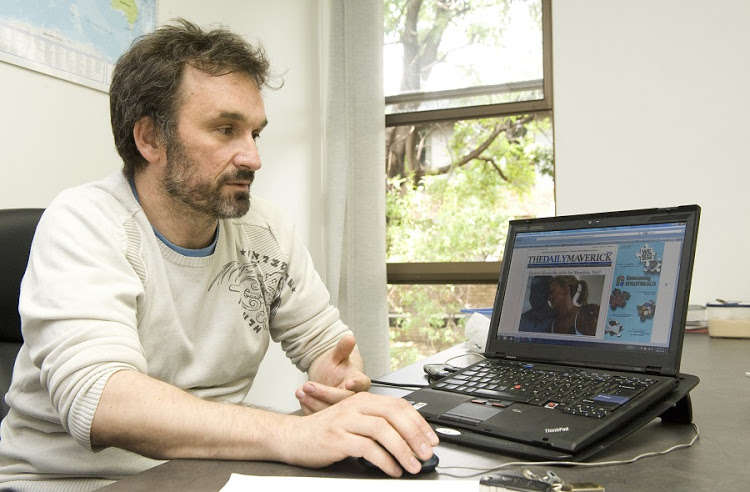 
Try, if you can, to see through the noise. In South Africa there’s a lot of it, so much so that profound events occur and are picked up by social media, given a quick going over on Twitter (and Facebook a week later) and discarded within hours. Articles are written, praised and forgotten. The same with deeds. The noise the ANC is making as it eats itself is deafening.

I take precautions. I am heavily dependent on Twitter as a source of news. Tiso Blackstar, News24 and Daily Maverick all have really good journalists who can take you live through a court case or a press briefing. But I try to use Twitter carefully. I do not see notes or threats or insults from anyone I don’t follow so I am spared the horror of being sworn at or threatened first thing in the morning by people I don’t know. Twitter gives you filters that can do that.

But still I’ve been finding my feed full of rubbish I really don’t need to know and I tried for about 10 minutes the other day to figure out why. I soon found the culprit.

His Twitter ‘handle’ is @DrZweliMkhize and, yes, he is indeed our minister of health. I know him a little. But I’m sorry minister, I have stopped following you on Twitter and in just a matter of days the difference is noticeable. I feel a bit better, suddenly.

Because here’s the thing. Zweli Mkhize, on Twitter, follows almost 40 000 other people. Forty thousand! How do you do that? Or, why? He only joined Twitter in 2017. I don’t even follow 1 000 people and I’ve been on the App since 2009. To give you another media example, the broadcaster Eusebius McKaiser follows 1 320 people and has, in turn, about 293 000 following him. Helen Zille follows 2 300 people and has more than a million following her.

Perhaps Mkhize feels he is being polite. But because I follow him (or did), and because he follows so many other people and feels obliged to retweet their every single thought, they all get retweeted to me. Or even when he politely ‘liked’ something I got notified. He may not even know this. It has been, I realised, insane. Or was. I swear my Twitter feed is (briefly no doubt) a pleasure again but I’m sure the health minister must hold some kind of record. Perhaps someone will find out what it’s called.

Calm having returned to my social media I have been thinking about how to use this column more helpfully. I edited magazines and newspapers for more than 17 years and pissed off way too many journalists at one time or another for much of what I say here to be listened to. Maybe it isn’t a good idea. People can be easily hurt and that’s not nice. The object of being a journalist, I remember once being told, was not to make other people cry.

But it’s hard to look back without regrets. Or, as Christopher Hitchens would have it, remorse and regrets — remorse for the things I did and regrets for what I didn’t do. I should have fought harder for ‘my’ newspaper, Business Day. I like to think I did until my final day as editor, but when you go you go.

It seems like yesterday but, I close my eyes and suddenly the kid who once just had all the opinions now has arguably the strongest newsroom (albeit virtual) in the country. I’m talking about Branko Brkic at Daily Maverick. There is almost no story worth reading that he can’t reach with a heavyweight hand now. I remember how down he was when he closed his physical magazines (to which I was an enthusiastic if anonymous contributor) and then watching him put today’s digital Maverick together from an office that seemed to consist mainly of a table at the old Seattle Coffee shop next to Exclusive Books in the Hyde Park Mall in Johannesburg.

Partly it’s technology. Mainly it’s Brkic. He is beyond energetic and to suggest he might be determined or focused is to so greatly under-describe his stamina you risk not understanding him at all. You can measure that risk in real money too.

I wanted to write this before ownership of Tiso Blackstar, my employer, changes hands later this year. Not so much to the current owners and executives, who have tried mightily to both ride and resist the winds of change blowing through the media but to the incoming owner, Lebashe Investments, which will have spent around R1bn by the time it walks through the doors at the Sunday Times, Business Day, the Financial Mail and Sowetan in, possibly, November.

Media is a rough business

Welcome. Media is a rough business. By the time you get here there will be no more easy wins. The low-hanging fruit is gone and there’s a digital revolution going on out there that wants your audience. And it’s free. And it’s pretty damned good. And it’s co-operative. New Frame, a new favourite of mine online, writes a fantastic story about a xenophobic mob trailing behind police during raids on foreign occupied buildings in Johannesburg the other day. Who knows New Frame? Turns out it doesn’t matter because the next moment it’s on Daily Maverick. For free.

Reserve Bank governor Lesetja Kganyago makes an important, market-moving speech one lunchtime recently. The media is there. Before he’s finished speaking it’s on Daily Maverick. For free. amaBhungane, without question the country’s best investigative editorial team, finishes a six-month investigation. Business Day can have it but the amaBhungane rules are they can’t edit it. And anyway it’s way too long for a newspaper. No worries. Within moments it’s on Daily Maverick. For free. News24, the biggest news site in the country gets another scoop. And it’s for free.

But what you (the Lebashe group) are buying can’t give all (or perhaps any) of its content away for free. The only way to defend your position is to invest more money after you’ve bought the business. In people, experience, in specialisation and in training. Your people need to be able to produce content your audience (you sort of don’t get to pick them either and they’re extremely irritating and demanding) will pay money for. It’s not easy.

What you face is a complex problem that needs to be treated with respect. Independent Newspapers is not your problem (though if the PIC calls in its loans and ownership changes it might be). Independent, free-to-read digital media is your problem. You just have to accept it and decide on a strategy for your own house and implement it without ever wavering.

One way or another I’ve been part of Times Media/BDFM/Johncom/Avusa/Times Media/Tiso Blackstar for 24 years and the core dilemma has never changed in all that time and through many changes in the boardroom. It is to find the courage and strategy resolutely to charge for your content and to recognise that in order to do that it has to be worth the money.

And then, having settled on your strategy, find your mad genius to implement it. Good luck.

Failure to do this means trying to put as much as you can behind the paywall but still needing copy in front of it to attract the advertising that follows online numbers. Try to avoid being stuck between two worlds. It’s a terrible way to live.

Media as a target

I read something the other day that, out of the blue, made me feel awful. I wanted to punch something. I welled up. It was written by Ferial Haffajee.

Ever since the Black First Land First group held a protest picket outside my home in 2016, preceded by months of Gupta trolling on social media, photoshopped pictures of me being walked like a dog by Johann Rupert, pictures actually of me with my wife or going about my business being secretly taken by a Gupta-financed surveillance operation and subsequently used to “prove” I was having an affair which was made into a news story and posted on the internet, I have been on edge.

Try as I may, it all changed my life forever. I’m still nervous. I get depressed because I actually know for sure how little you can do when confronted by the mob, the lies and the abuse. The realisation that you cannot protect yourself or the people you love or those around you is profound. Haffajee, also now at Daily Maverick and one of the best of a generation of newspaper editors, wrote the piece I’ve never even thought of doing because I never wanted anyone to know how anxious I am. I’m grateful she did.

Speaking of Haffajee, she is one of the targets today of a tough piece from former DA leader Helen Zille, herself wounded many times, including no doubt by me, on social media. On Twitter after Zille’s piece appeared, the two appeared to be lining up a debate. Zille is herself starting a podcast. I am to be its first interviewee, next week and after the past few years she has every reason to want to take me out, as it were. Let’s see how civil we can all be to each other rather.