LATEST NEWS
Home Communications Opinion Our newspaper story: ‘Behind the headlines in an era of state capture’

Our newspaper story: ‘Behind the headlines in an era of state capture’ 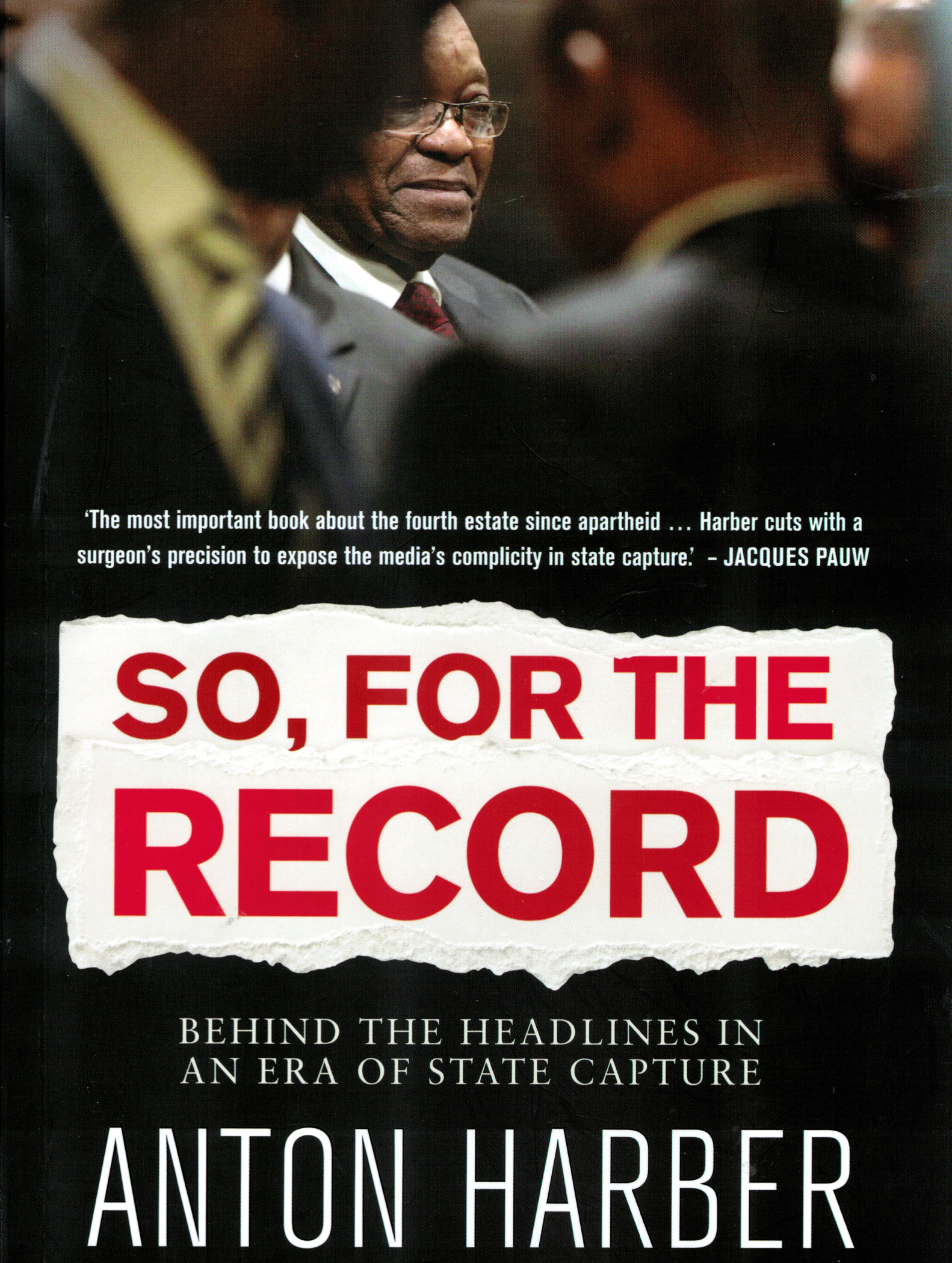 So, For the Record – Behind the Headlines in an Era of State Capture Anton Harber (Jonathan Ball publishers, 2020).

In May 2015 I wrote an article – The Leak Wars – for this website after the Sunday Times and City Press started a headline duel on alternate weekends about the SA Revenue Service running a brothel and other startling allegations of malfeasance.

I sensed that something untoward was happening because both accounts could not be right. The Sunday Times front page lead on 9 November 2014 accusing SARS of employing prostitutes was bizarre, not least because no proof was proffered. What happened, I wondered at the time, to the trusted and time-proven safeguard – ‘When in doubt, leave out’?

I wrote a subsequent article, ‘So where’s the brothel, Tom Moyane?’ The answer is provided in Anton Harber’s stellar book, ‘So, for the Record’, by Phylicia Oppelt, who was editor of the Sunday Times at the time.

She acknowledged in one of the many interviews Harber conducted for this book that it did not exist – something that should have been obvious right from the start.

For me, the most significant truth to emerge in Harber’s book is when he describes how a watermarked and confidential copy of the interim KPMG report belonging exclusively to Tom Moyane – one of only eight – ended up in the possession of Piet Rampedi.

What it tells me is that Rampedi was working shoulder to shoulder with the now-disgraced Tom Moyane – a significant member of the state capture project now unfolding at the Zondo commission.

Press Ombud Pippa Green’s recent address at the 10th Annual Percy Qoboza Memorial Lecture event bolsters that perception because when the Press Council asked the Sunday Times reporters to confidentially reveal the sources of the information in their controversial SARS articles, they refused:

This case came before my predecessor, then Ombud Johan Retief, and a panel for adjudication.

When highly contested stories are based on anonymous sources, the Ombud usually asks for those sources – in confidence – to check whether, in terms of the Press Code, the newspapers had reasonable grounds to believe that their stories were truthful and accurate.

Mostly, newspapers comply with this request.

In this case they didn’t. The reporters refused to divulge their sources and refused even to hand the Ombud and his panel of adjudicators a copy of the contested KPMG report that formed an important basis for their story.

Again, the reasons for this became clear later. The KPMG report – an interim, not a final report in any event, was distributed to only eight people and all the copies were watermarked. As Harber reveals, the copy that the reporter (Rampedi) relied on belonged to Tom Moyane, the SARS commissioner appointed by Jacob Zuma.

In my career spanning more than half a century as a reporter I can think of no greater betrayal of everything that defines honest and ethical journalism than this.

One hopes that the SANEF commission into dishonest and injurious reporting will take cognizance of this when it delivers its apparently imminent report.

The denouement for the rogue investigative unit in the Sunday Times newsroom came in a series of steps taken by the NPA:

To nobody’s surprise, Rampedi and WaAfrika were employed by Sekunjalo’s Iqbal Surve after they left the Sunday Times and, at the time, Marianne Thamm wrote that, to clear their names, it was imperative that they testify before the Zondo and Nugent  commissions.

They did not do so – make of that what you will.

This passage in Harber’s book – page 235 – relating to the discredited KPMG report, suggests they should be subpoenaed to testify before the Zondo commission:

And whose name was on Rampedi’s copy? Who was the origin of the abbreviated version he received? It was Tom Moyane himself. That was confirmed for me by someone who saw Rampedi’s photo of it, with the watermark. It indicated that `Zuma’s appointee as the news SARS Commissioner, who was systematically attacking the ‘rogue unit’ and using the Sunday Times reporting to dismantle SAR’s investigative capability, was working hand in glove with members of the Sunday Times investigative unit.

At the time of writing, ‘So, For the Record had been on sale for more than week and I find it significant that neither Rampedi nor Tom Moyane have disputed Harber’s claim that they were collaborating in falsely defaming leading members of our income tax collecting agency to the immense detriment of the country, its reputation and it citizens – neither have they sought to explain how Moyane’s watermarked copy of the interim KPMG report ended up in Rampedi’s possession. They have also not sought to contradict ombud Green’s subsequent and reported remarks in this regard at a public function.

Never let it be forgotten that the cost to the country of the State Capture project during the ‘nine wasted years’ of the Jacob Zuma era is estimated at more than a trillion rand.

The second half of Harber’s book covers the breaking of the Guptaleaks story and provides fascinating reading in itself.

In 2016, in an extraordinarily serendipitous moment in our history, the laptop computer of Ashu Chawla, a Gupta employee at Sahara Computers in Johannesburg, malfunctioned.

The computer-repair company he took it to said its broken disk drive would cost R10 000 to fix.

He declined to pay and, in due course, it ended up in a workshop full of computer parts, which were scheduled for re-use as spares.

There were some 10 000 hard drives in this workshop and, as luck would have it, one of the eventual whistleblowers picked up the Chawla component and downloaded its contents – 300 000 emails sent over the course of several years.

This cache of information ended up with lawyer Brian Currin. It was, in turn, shared with human rights activist Mark Heywood, Branko Brkic of Daily Maverick and Stefaans Brümmer of amaBhungane.

They realised that the lives of the two whistleblowers were at risk and needed the money required to move them to the UK. According to Harber they approached a well known businesswoman who agreed, but contended that the news needed to be released as quickly as possible and to the widest audience. When her suggestion that Daily Maverick and amaBhungane not be given exclusive access to the information was declined, she demanded the return of her initial investment.

After an approach to Wikileaks did not succeed, she distributed 200 copies of the information she had to ‘people of influence’. This limited amount of information inevitably reached the Sunday Times and City Press which enabled them to preempt the subsequent Daily Maverick and amaBhungane articles.

This achieved her objective of alerting the country to the Gupta depredations but the newspapers that broke the story could not sustain the narrative because they had only a fraction of the information available on Ashu Chawla’s disc drive. AmaBhungane, using all the information on Chawla’s disk drive, published 92 articles in the year after they received the information.

Daily Maverick has subsequently made this information available to journalists throughout the world.

The Sunday Times apologised for the damage done but the pro-Zuma faction of the ANC still has a media voice, as Harber points out:

WaAfrika and Rampedi reappeared after some time in Iqbal Survé’s Sekunjalo Independent Media group, and re-opened the campaign around the ‘rogue unit’ and against Pravin Gordhan. What was becoming clear was that rogue journalists, subject to little or no editorial scrutiny, could find a platform to disseminate their own personal invective.

Harber points out, however, that the Guptaleaks exposé resulted in increased funding for amaBhugane and Daily Maverick from philanthropic institutions and individuals who care about media freedom.

Jacques Pauw regards So, For the Record as ‘The most important book about the fourth estate since apartheid’ and I believe the plaudits are well deserved.

“It is an important book of record in our media history lexicon as well as being an enjoyable and absorbing read.

“It will also serve as a guide to the coming generation of reporters as we, of necessity, seek to distance ourselves from the Gupta and Sekunjalo chapters of our newspaper story and as the Sunday Times seeks to restore its credibility.”