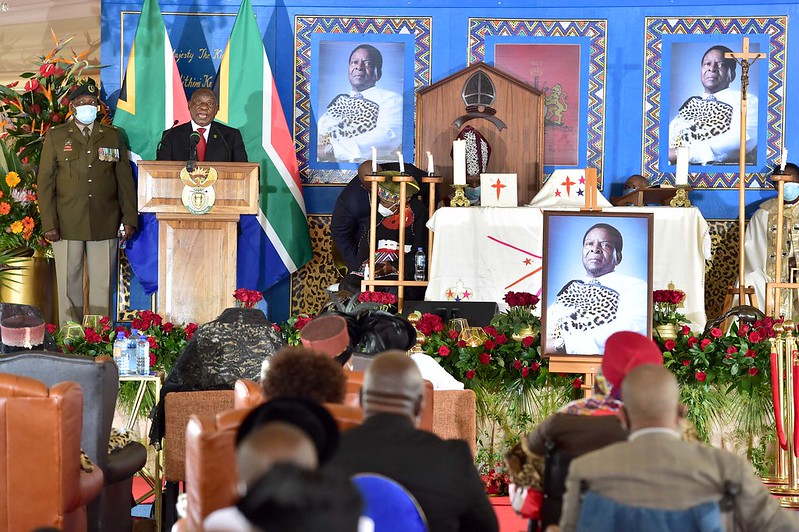 The headlines broke last week as I was closing off the weekly report. King Goodwill Zwelithini had passed away. Today those posts and headlines exceed 80 000 items with over 330 000 engagements, a nation cries, The King is Dead, Long Live the King. Bayede Wena we Ndlovu!

The death of South Africa’s Monarch, a man respected by many across the world, a man revered by the Zulu nation. I was embarrassed and ashamed that I knew next to nothing about our Monarch except that one word from him could bring peace or war. Everyone respected the King in South Africa. Everyone! I learnt so much about the Zulu culture and how much the King gave to our country that I was horrified at my ignorance.

Zulu culture is extraordinarily rich and deep. I learnt more about the Zulu kingdom in the death of a Monarch than I ever learnt on #heritageday or with my white version of #BantuEducation.

Less than two weeks ago, I wrote about the death of a friend and ferocious journalist #KarimaBrown. I watched both funerals and the stark contrast between the two funerals can sum up South Africa. A completely diverse and utterly unique country. I watched thousands of Zulu people descend on the Royal Palace and despite his death being attributed to #Covid19, there was barely a mask in sight.

The #citypress referred to the monarch as a “useful apartheid idiot”; my jaw dropped, how dare they? Turns out I wasn’t alone, Prince Buthelezi said he would act against the editor and the paper. Another person that felt a stab of the Zulu Power was #Ramaphosa as he was quickly taken away from the funeral for “security purposes” after a brilliant eulogy.

In his death we are left with an entrenched legacy that says don’t mess with the Zulu nation, respect the Zulu Kingdom, the same knowledge I had before his death was now emblazoned across South Africa’s chest.

Last week we spoke of the #StudentProtests and this week we learnt that several students were found carrying guns in Braamfontein. That’s not good is it? I smell a rat, a political mercenary rat. I’m leaving that there.

If you missed it #Wits capitulated and let the historical debt students into campus but it’s not enough, it’s not nearly enough as our children fight to get educated. The students called for a #NationalShutdown and the ground swell gained momentum.

Just as I was shaking my head in despair, a side-line story hit, #LasizweDambuza and crew took to Instagram Live with a campaign that carried a hashtag #10RandGoesALongWay, an absolute genius of a campaign that called on the nation to donate ten bucks to the students.

Let’s be fair, what can you buy with ten bucks, well I’ll tell you, within a few days they had raised a million rand. Now we’re talking! My chest swelled with pride. If no one is going to fix this problem let’s stand as a country and fix it ourselves. If you haven’t already, donate, because ten bucks does go a long way.

With that million rand, 100 students will be back in their university class without debt and fear. Have you donated yet? This story makes me so proud to be South African, solutions driven and effective and with zero cost, just likeminded individuals doing good, this is the South Africa I know and love, where #10RandGoesALongWay!

South Africans united again this week in a common enemy, #Eskom; the rolling blackouts and so called #loadshedding ‘schedules’ were farcical. They never stick to a time; here in remote KZN the power dipped about six times in as many minutes and I struggled to keep my business running despite a generator and three sim cards for different networks.

#MrPresident, the world said take our money, but keep the lights on.  #DeRuyter may be a racist but he’s more than that, he’s useless. I read a story of how a child on a mobile respirator was taken to the local garage to keep his life because of no power. This has been a mess for over a decade, where is our leadership? What happened #Pravin? You were kicking skulls and now, you can’t even find them in the dark.

You promised us better Mr President. We are trying to fix the debt you guys got us into, yet you don’t give us the basic tools to start the job, education and electricity! Even worse, across Johannesburg last week many were left without water as #WaterShedding is now also a thing.

The #IPPBids started this week, this week? Are you kidding me? This week you only started the process of alternative energy? I bet that’s going to cost us the balance of our organs and we won’t see any of it. Sorry, I’m burnt now, I don’t believe anything I see when politicians talk of doing good for South Africa.

A colleague called me to say ‘check out your Twitter trends’. I looked, and I only saw one that stood out #PrisonWarder. What was going on? Before I get down to it, a word on Twitter: Twitter, what happened? The place became a cesspit of hashtag hijacking and #FollowMe #FollowYou garbage.

It’s so bad you can’t find the story as tweeters jump on every trend to gain followers. Let me start from the beginning. I go and look for this story #prisonWarder and I’m confronted with a useless set of tweets that have absolutely nothing to do with the story posted. I scroll and scroll until I finally find what it was that pushed the hashtag to the top of the queue.

Someone else who got hammered was #AnojSingh. I have never seen a more slippery character at the commission, he squirmed and wriggled as he batted the facts with pure diversion tactics, but #Zondo (like the bear we know), pushed him into the corner and disembowelled him with his sharp tongue. “It’s not as simple as that,” he roared without raising his voice, and Singh came off second best.

What’s happening with #Zuma by the way, anyone? Anyone? I did read that #Duduzane will be running for President, but under which party? Can we just start again guys, this is far too much hard work!

The #EFFare very busy chasing the #CR17BankStatements. Let’s get serious here: no political party is going to open their books wide open. They can’t, not so much for what WE might see, but more like what the funders will also see. Imagine taking money from the #Steinhoffs and the #BMF. Doesn’t look good, does it?

In other news the price of petrol is outrageous and Miss SA is still a thing.  We will be making the vaccine at home, about a year behind. Not bad, not bad at all by our normal standards.

Across the borders Tanzania’s President #Maguful died from #covid although the ruling party won’t say it because you’ll remember that #Maguful didn’t believe there was such a thing. He tested the sheep and the paw paw and found Covid on both and then said that it can’t be real. I’m not making this up. The sad story here is when Maguful was first put into power he was considered Tanzania’s Madiba and #BelikeMagaful became a massive trend as he slashed through corrupt officials at the docks. That all stopped after a month or so. Money leaves devastation at the hands of the greedy.

It’s been a crazy week, I leave you with this parting thought: #HumanRightsDay is upon us and it’s time to help your fellow South African, donate 10 bucks to those kids who need it and as we head into two long weekends littered with #SuperSpreaderEvents, wear a mask! Don’t be a mampara.