LATEST NEWS
Home Out of Home Captive audience: Why mall media is marvellous 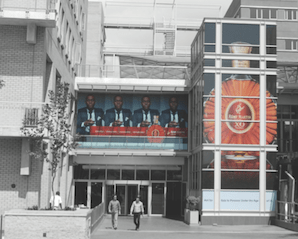 The possibilities of mall media, a little-understood OOH medium, are a creative option for brands.

“Mall media can build new brands, remind shoppers about existing brands and specials or even act as an entertainment platform. It also has the ability to drive conversion, consideration and can encourage trials of brands and their products,” says Deshendri Smit, executive head of sales for Primall Media and Mallworx.

There seems to be less understanding around mall media than any other of out of home’s (OOH) offerings. Mall media can be understood as the static and digital advertising found in malls, that targets the needs of shoppers and which offers different directives depending on advertiser needs. This includes banners, boards, on-shelf and point of sale marketing.

This diminished understanding has unfortunately affected its appeal to advertisers. There seems to be a preconceived notion that this form of OOH advertising doesn’t have as much effect or impact as other types. But Smit is quick to point out that while ad spend in other OOH advertising forms has declined, mall media ad spend has in fact steadily increased.

In 2013, Primedia commissioned the Shoppertunities study, executed by GIBS, and some of the results were truly telling. According to the study, 8 in 10 mall goers make a purchase during their visit and 4 in 10 are actively influenced by advertising and activations in the mall.

Another player in the mall media space is JC Decaux (formerly Continental Outdoor). Lyn Jones, marketing manager for Sub-Saharan Africa for the group, explains that the appeal of this medium of advertising is that, “It is one of the key touch points to reach consumers before they reach a purchasing decision. People are relaxed in that environment so it’s easier to engage with them. Malls are a way of life for many communities and an entertainment destination. Mall media is able to capture consumers in the right state of mind”.

Jones adds that research supports the fact that the medium is very effective as it is placed right before purchase decisions.

Smit sees many opportunities in mall media – a major one is research. “The focus needs to be on shoppers, their mindsets and how to appeal to them, all of which is crucial for the enhancement of mall media,” she says.

Company CEO, Dave McKenzie, explains that mall advertising works because there is a captive audience who spend a lot of time in the environment.

“The shopper feels like it is their home away from home and they like to identify with their respective mall. When an ad campaign is implemented, the shopper is being told that these brands are also a part of their mall and indirectly their identity,” he explains.

Just like Primall and Mallworx, Boo! Media customises its packages depending on the needs of the client, but McKenzie says the company does not believe it directly competes with advertising companies who operate inside the malls.

A major trend that is driving mall media is an increase in the digitisation of offerings. “Digital has lower production costs and a quicker turnaround time,” Smit explains.

More relevant content and creative is also appearing on those digital platforms, some of it interactive, in order to engage shoppers.

In fact, JCDecaux has already seen the mall environment becoming more digitised as, Jones explains, it is more affordable and niched for advertisers so making it more tactical and engaging with consumers. One example of the successful use of digital with mall media is retailer Tesco in the UK, which has digital boards inside and outside its stores. Depending on the time of day and seasonality, and based on big data analysis, the boards showcase appropriate brands.

But despite this fresh approach, Smit says an ongoing challenge is the relevant, creative execution of campaigns and engaging with the agencies who produce this. Both Primall Media and Mallworx are increasingly consulting and engaging with creative agencies on profiling shoppers.

Smit believes that one of the biggest mistakes advertisers or ad agencies make is duplicating existing content on mall media platforms whether it’s a video or commercial for a digital offering or a print ad for static.

Jones agrees that creative content is paramount. “The challenge is to make sure that consumers are engaged. as the environment tends to be quite cluttered. The content needs to stand out,” she says.

Another opportunity, Smit believes, is the integration of social media into mall media. “Shoppers also interact with social media while they are in malls. So the aim is to influence their behaviour by combining social media and mall media. Activations should also be in the mix,” she says, adding that the rollout of free Wi-Fi at some malls will open up huge opportunities to boost mall media – shoppers will find it easier to engage with campaigns that add social media to the mix.

Jones too, imagines huge opportunities if mall media is integrated with digital and social media. “The key is relevance and big data is allowing us to ensure that,” she explains.

Unlike other OOH mediums, mall media is more targeted, rather than mass reach, and quite scientific in its approach to crafting a campaign. However, Smit warns, “There is no one fit solution across brands. The value comes from collaboration with brands and their partners. We have to match the brands expectations with the mall, specific customers and a specific media type.”

While mall media still has to prove return on investment, reach and frequency, it is certainly more tailored than general OOH advertising. The process is so customised that neither Primall Media nor Mallworx has a rate card.

According to Smit, point of sale mediums remain the most powerful. “You want to get as close to the shopper as possible when they’re in decision making mode,” she says.

In fact, it is so successful that Smit says while other OOH advertising forms have declined, mall media point of sale advertising has grown.

Consumers spend so much time shopping and with purchases coming directly after they’ve seen mall advertising, this marketing medium is inarguably effective.

But, in such a cluttered space and with consumers being more diverted and distracted than ever, it’s clearly essential that creative needs to stand out and be innovative as possible in order to grab a shopper’s attention.