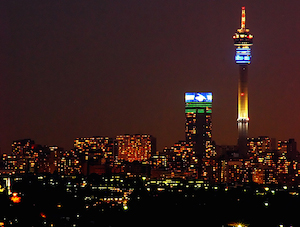 Managing director at Vizeum, Kelvin Storie, gives an in-depth view of what makes Gauteng the first choice for media spend.

Is Gauteng, the smallest province in terms of land size versus the highest population count, really the powerhouse of the media industry in South Africa? It is most certainly an economically active hub for South Africans to find jobs, create careers, grow their spending ability and live out the cosmopolitan dream in the place dubbed the ‘City of Gold’.

However, if we’re going to look at the overall media strength of Gauteng compared to the other provinces, we need to explore both macro and micro factors.

Of the nine provinces in South Africa, three powerhouses stand out. Gauteng, KwaZulu-Natal and Western Cape collectively contribute a significant portion to the country’s value, reportedly over 60%.

Gauteng, which evolved from a gold mining region into South Africa’s industrial and Africa’s financial nerve centre and technological centre, today contributes 36% to our country’s GDP; 40% of employment and 43% of all SMMEs in the country are based in Gauteng.

At current prices, the size of the Gauteng economy is R1.7 trillion. The fourth largest economy on the continent, Gauteng contributes more than 10% to Africa’s GDP. And this is all driven from an area that only occupies 1.4% of SA’s land mass.

The provincial economy has proven its worth by consistently outperforming the economies of other provinces, with an average growth rate of 4.5%. Even in the midst of the global economic slowdown, Gauteng’s growth rate was the highest in the country, reaching 2.6% in 2013. Currently, Gauteng’s main contribution towards the GDP is driven by the financial sector, followed by government, wholesale and manufacturing.

So, yes Gauteng is definitely the powerhouse of South Africa.

But, let’s circle back to the main topic – the media industry. If we start with the pure basics of LSM groupings and the average incomes per powerhouse province, the following, quite unsurprisingly, comes to light:

Naturally, there is a big disparity between each province’s share of rural versus urban areas. However, this difference as a whole is starting to decrease as infrastructure grows and spreads throughout the country, connecting more consumers to goods. Just over two thirds of South Africans live in urbanised areas.

In terms of income, Average Household Income for Gauteng is R17 572 with the Western Cape following with R13 397 and KZN with R11 303. The earning potential is higher with the assumption of disposable income being higher too.

We’ve looked at the economic strength, the living standards breakdown and income, so the next logical step would be to look at the overall media consumption per province to overlay where the greatest consumption is occurring and hence where the advertiser’s budget should be focused.

If we look at a Past 7 day snapshot of Pay TV, Total TV, Total Radio and Online, some interesting insights are revealed. For instance, the biggest portion of the Pay TV audience is in Gauteng, equating to 51.8%. The same applies for the metropolitan regions even though the audience gap is way smaller between the three powerhouses. This trait is similar for Total TV viewership over Past 7 Days.

Radio also shows a strong audience share for Gauteng and the metropolitan regions. Gauteng radio stations are still the main drivers of large audiences and ultimately play an important role in influencing the media inflation for this medium.

A broad selection of radio stations cater for various segments within Gauteng and the growth of community-based stations is gaining momentum to broader urban audiences (for example Hot 91.9 FM and Mix FM), showing that there is an appetite by the listener for more.

When we examine who has accessed the internet within the past 7 days, albeit off a smaller reaching base, the field starts narrowing. KwaZulu-Natal and Gauteng show similar audience figures, however in the metropolitan area, Cape Town breaks ahead of both Greater Johannesburg and Durban.

We can analyse the difference between the provinces until we go in circles, but ultimately the choice of placing your client’s sacred budget in the right place, at the right time and where they’ll get the best return is most importantly based on your accurate segmentation model.

It’s important to bear in mind that the consumer we are dealing with today is more fluid than ever and borderless in their media consumption. One medium in particular is growing in great strides – digital.

According to PwC, “The line between traditional media and digital media is blurred – consumers want more flexibility and freedom in how they consume content.” Magazines and newspapers, which show only moderate consumer growth within specific genres whilst others are declining, face strong competition from the internet.

Television will remain a highly significant contributor to consumer spending with combined revenues from TV subscriptions, advertising and licence fees projected to reach R40.9 billion by 2019. One consistent trend – and not just in South Africa, but globally – is the rise in overall consumer spending through to 2019 on video-based content and services.

The past process of geo-targeting key areas to encourage consumers to a specific store, is now one click away. Without the consumer even leaving the comfort of their home; a centralised order-taking department can dispatch an item to any corner of the country. Digitally, we are able to target across device, anywhere as long as the consumer has connectivity.

However, the penetration of internet needs to gain more momentum while the mobile accessing market is streets ahead. The fact of the matter is the spending power and size of the market is in Gauteng, but media choices need to be more seamless and fluid between the connected/unconnected worlds. 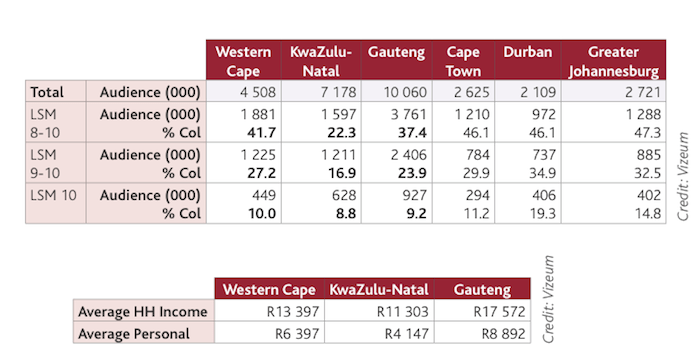 * Research from AMPS 2015 and StatsSA

This story was first published in the July 2016 issue of The Media magazine.