Baby RAMS is born (With photos) 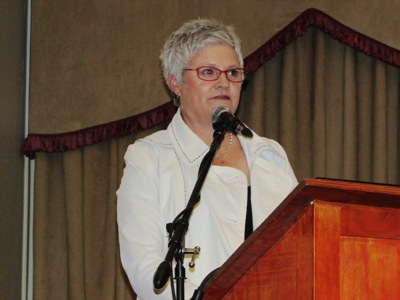 The Broadcast Research Council (BRC) has released the first results of its new Baby RAMS survey, the new measurement of radio listening. Michael Bratt attended the unveiling to witness the birth.

A large, eager crowd gathered at The Wanderers Club to get the first glimpse into the results of the first ever Baby RAM survey, produced by the BRC, with fieldwork conducted by TNS. The results painted a very different picture of radio listening from trends found in past RAMS releases, which were previously done by the South African Audience Research Foundation (Saarf).

Before the proceedings got underway guests were treated to music off a playlist of radio inspired songs. Then Clare O’Neil, CEO of the BRC, took to the stage and led the gathering in song and dance. She explained the major benefit of the Baby RAMS was that its sample frame was more reflective of the demographics that make up the South African population. The sample is less “stretched” than it was in Saarf’s RAMS research, making the data more effective.

The major trend coming to light in first set of data is that the perceived ‘drive time spikes in radio listening pattern’ has been broken. Previously people thought that radio listening was low outside of morning and afternoon drive time hours. The data showed that the reality is that people listen almost equally every hour between 06:00 and 21:00. “Throughout the day there is no drop, there is no dip. Because we have heavier, longer, more loyal listeners,” explains O’Neil.

Other observations from the data include:

A breakdown of the results of every province was then given. Noticeable trends in this section included car listening dominating in Gauteng, mobile listening playing the biggest role in Limpopo, lunchtime listening is popular in the Northern Cape, and community stations are punching above their weight in every province.

Aside from overall radio listening trends and provincial breakdowns, major radio stations will now for the first time have access to valuable insights, including percentages of exclusive listeners, average daily cumulative numbers, one week  numbers, average hours of listening per day, as well as a breakdown of station listening by device and location. The BRC has gone further and created easy to navigate dashboards for each station with data related to them, which BRC will update. They can be accessed via Telmar.

Chris Botha, group managing director of The MediaShop, also spoke at the event, giving his take on Baby RAM. “Any comparison between Saarf RAMS and BRC RAMS don’t exist. Don’t even start … this is a brand new piece of research, it’s not an evolution of SAARF RAMS, which to me is exciting news,” he emphasised.

He added, “What BRC RAMS offer us is the chance to look at radio with more granular detail… there are major opportunities ther … it’s something that we have not been able to do in the past. Exclusive listenership adds another dimension to media radio strategy.

“We are standing on the edge of a big change… let’s do this thing together. Let’s engage and see how we can work together. This is an amazing opportunity for all of us.”

Just fewer than 13 500 households were covered in the survey, with just less than 36 500 individuals completing radio diaries. They were interviewed in all 11 official languages. 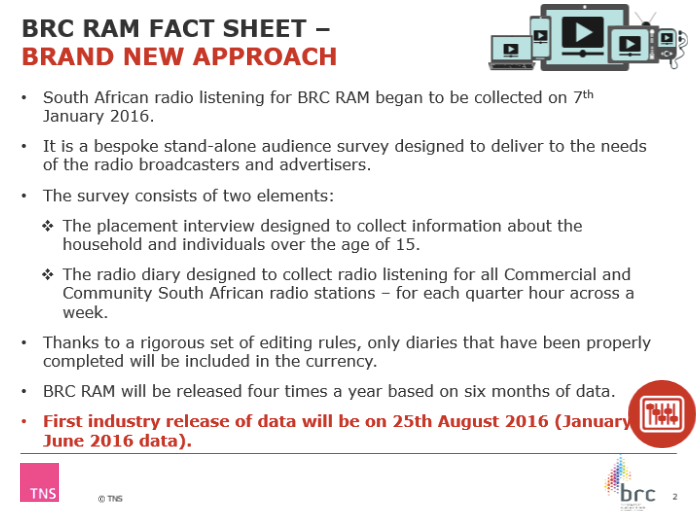