Coming soon: The creative war room of the future 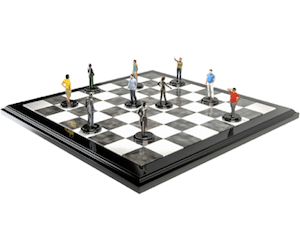 Remember when all the rage was to set up a ‘war room’ for monitoring social media while a campaign was live? The goal of these efforts was to enable brands to operate in real time, responding to customer feedback.

Old Spice did it better than almost everyone else with a single TV campaign, and many brands paid lip service to the concept. There was maximum fanfare with minimal impact.

This model could get revisited as we start thinking through the concept of connected creativity.

Most of the conversation about creativity influenced by data revolves around either the initial targeting and creative process, or the element of dynamic creative. Both are implemented often these days, and both succeed. But I question whether this is the destination or simply a waypoint along the journey?

I could see a stage where agencies are tapped to play the role of a real-time creative bullpen, developing concepts and executing them in real time with a human component to deliver warmth, humour or whatever element that can never be replicated by a machine-learning based algorithm. Execution could come in the form of new TV spots or display creative, social posts or even outdoor campaigns.

Creatives with direct access to audience data… in real time

Some brands do some of this in a stunt-like creative campaign on one channel or another, but what about doing it everywhere all the time?

Imagine a rotation of creatives seated in a room with direct access to the data for the audience currently engaging with their campaigns. These folks could be getting a steady stream of insight from social media as well as from the other sources where the audience is engaging with whatever campaign creative currently in market. Data could be augmented by third-party appends and analytics, and it would detail who these people are and what behaviour they exhibit.

That creative team could then be developing new concepts and themes, ensuring that the next interaction with customers was fuelled by insights derived from the last.  This is not about changing the image or copy, but actually coming up with witty or resonant ways to interact in a new format or a new manner the next time you see them.

This model of creative development is more like air-traffic control than a traditional creative department. It’s like improvisational comedy – where the creative minds are given full control and the ability to do and say what they like with the situation and information they’re given.  The response can be measured in real time, and creatives are empowered to act accordingly.  When they leave their station, they leave the work and the next person takes over. There would be less “taking your work home” and the teams would constantly be given fresh material to work with.

I can’t foresee this becoming the sole model for creative, but in an interconnected digital world, where the ability to produce messaging in a dramatically shorter period of time is commonplace, the model could certainly be tested and prove successful.

This bullpen model would still be anchored with a standard TV + digital model for creative used to maintain brand image and continuity. All of these other elements could be seen as gravy: something that makes the core message stronger and more resonant.

You could scale the model if the data coming in enabled buckets of storylines be fed to the team, with the results pushed out to categorised consumers based on commonly seen behaviours and insights.

It’s a new world out there. Is this the kind of model that an agency could adopt?  What about the big consulting firms? Will this be how they get their paws into the agency space in a big way?

My instincts say yes — and I can’t wait to see it happen!