LATEST NEWS
Home Out of Home Taxi branding in action

Posted By: TMO Reporteron: January 13, 2017In: Out of Home
Print Email 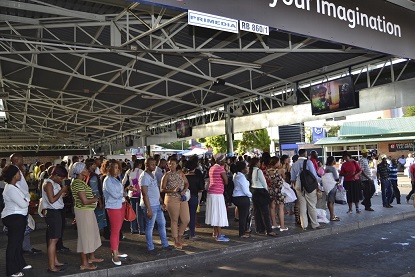 The commuter market is South Africa’s largest consumer segment comprising over 22 million people. Advertising on taxis should therefore be an excellent way to reach an extensive audience. However, this approach should not be a shot in the dark, but a calculated investment. For this reason, as part of Primedia Outdoor’s investment in research expertise and innovative market intelligence, they set out to track and measure taxi movement over a three month campaign period between February and April 2016.

In order to do this, each taxi was fitted with a tracking device, through which the study tracked 67 vehicles over a 3 month campaign period, in 3 different regions: 32 vehicles in Gauteng, 20 vehicles in KwaZulu-Natal, and 15 vehicles in the Eastern Cape.

The main objectives of the case study were (i) to determine campaign coverage and (ii) to quantify opportunities to see (OTS). With advanced geo-spatial analysis, Primedia Outdoor calculated OTS based on the movement of taxis within set out target coverage areas.

Over the 3 months measured, the 67 taxis travelled a total of 571 716 km- a distance equivalent to travelling the circumference of the earth 14.27 times! Of the total number of kilometres travelled, the campaign target areas that were covered during the campaign came to 206 225 km.

Looking at the target area coverage, the study showed that the campaign generated OTS of more than 6 million in a single month, with an aggregated opportunity to see of 18 million over the total campaign period. This highlights the extraordinary ability of the branded taxi campaigns to offer high reach and frequency objectives.

In Gauteng, 32 vehicles achieved coverage of 14 campaign target areas, including Soweto, Mamelodi, Alexandra, Germiston, and Roodepoort. Travelling a total of 78 446 km, the total OTS in one month amounted to 4 279 307 within the campaign target areas. The taxis tracked in Gautengtravelled through major convergence nodes and densely populated areas. 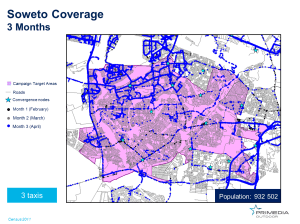 In KwaZulu-Natal, the study tracked 20 vehicles reaching eightcampaign target areas, including Pietermaritzburg, Durban, Newcastle and Blaauwbosch, among others. The total OTS achieved in one month was 1 426 813, with the taxis again travelling through major convergence nodes and densely populated areas. 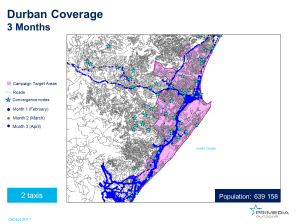 Finally, in the Eastern Cape, the study tracked 15 vehicles, reaching seven campaign target areas. Yet again, the vehicles travelled through major convergence nodes and densely populated areas, providing an OTS of 568 244 within a month. 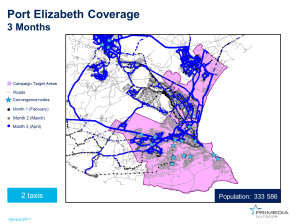 Taxi branding campaigns are an appealing product offering, as they quite literally become “moving billboards” for brands. According to Ruchelle Barker, Marketing Intelligence Manager for Primedia Outdoor, the case study confirms branded taxis’ ability to reach an extensive audience.  “Through the tracking of taxis, we have been able to demonstrate the ability of taxi branding to offer extensive coverage of strategically selected target areas,” she says.