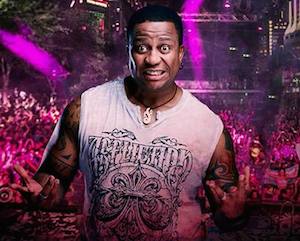 Live on this afternoon’s 5FM The Forbes and Fix Show, The Big Dawg, DJ Fresh, revealed that he has been “redeployed” to Metro FM. He will host the station’s Breakfast Show, starting this coming Monday morning (3 April) at 05:00.

Commenting on the move Fresh said, “I’m sad about it, but also happy because my entire career on radio has always been about everyone else, the management, the team, I have never done anything for myself … In a selfish kind of way, I feel like I earned this”.

A lot of the conversation centred on his time at YFM, where he began presenting in 1997. “My goal at YFM was to do both drive shows on 5FM, that was my goal and I feel that I have done that. It is time to move on, it is time for fresh blood,” Fresh said.

The popular DJ said was not a “bridge burner” and stayed at YFM for two years waiting for his contract to expire, before heading to 5FM in 2006, so that he didn’t burn any bridges. “I like to think my most loyal listeners at YFM came with me to 5FM.”

Asked how he felt about the move, Fresh responded: “Honestly I’m more excited, you know when you are so excited you are going to pee yourself? There is zero fear, which makes me afraid … I’m very excited; it’s a 30-year-long dream”.

Fresh said of his non-negotiables for when he joined 5FM, that he’d insisted on having “ a mix segment on the show to empower young talent, and having Catherine Grenfell as part of the team”.

Aside from presenting, DJ Fresh is also known for his music albums with over 30 releases under his belt as well as being a judge on SA’s Got Talent. His character is described on his personal website as, “From his 5FM radio show, music gigs and CD compilations, through to his TV appearances, DJ Fresh embraces the very idea of being multi-talented. Through his unwavering knowledge of, and presence on, the local music scene, DJ Fresh doesn’t just play the latest music; he makes music for his fans to enjoy. His loyal social media followers are one of the reasons DJ Fresh is so successful. They not only follow his every move on social media but they buy and listen to his music religiously. His opinion matters to them and he is seen as having a strong sense of community whether in the music industry or with his fans.”

Fresh’s arrival at Metro FM Breakfast comes on the back of Unathi Msengana announcing her departure from the show this morning. Her co-host, Glen Lewis, announced his departure a week ago after 22 years at the station. He is headed to Tbo Touch’s new app station, TouchHD.