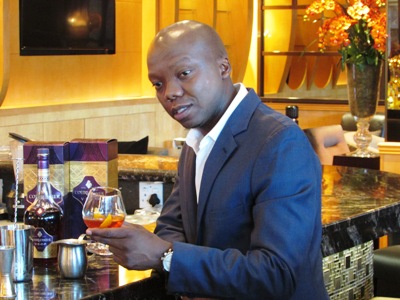 Just under two months ago, Tbo Touch launched an online radio offering, TouchHD, and is now expanding his online presence into a digital television channel. This afternoon [Wednesday, 24 May 2017] he will introduce MTN Mega Star, which he describes as a “character talent search development show”.

Touch is a very busy man, which made it difficult to find time to chat with him. But he took time out from a photo shoot at Signature Restaurant in Morningside – for cognac, Courvoisier, for which he is an influencer – to talk to The Media Online about his latest ventures.

“We don’t just bring artists based on their ability to sing. It takes more than singing to keep an artist in the mainstream market. A lot of them get deals and then next year they are broke. So we build character through mentorship, where we will be bringing in advisors and consultants on how to make it to the top and how to stay on top,” he says, explaining the concept behind MTN Mega Star.

Ten finalists will stay in a R30 million mansion in Steyn City for the show and each week one of them will be eliminated in the eight-minute long episode. Their expulsion will be based on how they handle situations, not on how they sing. “A lot of programmes don’t focus too much on character, they look too much into talent,” he says.

Each episode is eight-minutes long because it will be hosted on a digital TV channel accessible from all four mobile networks in South Africa, and is free on MTN, going to the already existing 13 million subscribers on MTN Play. MTN Mega Star will be interactive with a live audience voting for who gets eliminated as well as a ‘rescue talent’ feature where previously eliminated contestants can be brought back.

The winner will travel with Touch to Los Angeles for a week where they will be in studio with big producers and will get to record a song with a well renowned artist in Temple Music such as Tiwa Savage and Iyanya. They will then be brought back to South Africa to record with prominent local artists.

“It’s a 360 where you learn the record deal and where you learn the mentorship programme,” Touch says. The runner-up in the competition will join the TouchHD talent roster. According to Touch, this ties in with the station’s whole purpose which is “to bring in new talent and not do the industry norm of recycling talent. Being the only radio station that employs 70% female as well as having legendary icons such as Tim Modise”. He says in the past six weeks Modise has already conducted hard-hitting interviews with three premiers, seven ministers and CEOs. “The property is there to revolutionise how digital media is consumed,” says Touch.

Touch also revealed exclusively to The Media Online that TouchHD is expanding its presence into Africa, and through a partnership with Temple Management will open offices in Lagos, Nigeria in August, followed by Nairobi in Kenya in early 2018. “We won’t just be a South African station, but a true pan-African one so that we can cover stories of significance across the continent, which is what CNN is built on,” Touch comments.

Besides the reveal of the African expansion, Touch also provided a further update on his online radio offering. When Touch Central closed at the end of March, after six months of operation, it had 50 000 app downloads. In six weeks TouchHD has accumulated 40 000 app downloads and its partner, Boost Mobile, has installed the app on 30 000 phones, leading to a total reach of 70 000. When asked how much money he has invested into the project, Touch was reluctant to answer saying, “You can’t put value to the personalities that are at TouchHD. You can’t even put the value to the type of infrastructure with our app”.

According to Touch, TouchHD was the number one trend for two weeks on Google, Google Play and the App Store after its launch. “The machinery was to be more interactive. We went for the best app developers to build a chat platform within the TouchHD app, where listeners don’t just see what’s playing but can interact among each other, through the built in WhatsApp chat. That has built an ecosystem of followers to know who they are, communicate with each other … It’s beyond listening. We are providing a true digital platform where you consume music but interact with people sharing common values as you do.”

He also believes that the location of TouchHD’s offices is sending a message to other players in the media industry. “We are located right in the heart of Grayston [in Sandton, Johannesburg], the business hub for Africa, where you are 400 metres away from the Stock Exchange. It says we are here to play in the big league.”

When asked how Gareth Cliff is involved with TouchHD, since he used to partner with Touch at Touch Central, Touch explains, “I sat down with Gareth and I said ‘Gareth I want this monster to be bigger’ because at Touch Central it was just him and I, and a lot of DJs are frustrated on terrestrial. And he gave me his blessings to say ‘hey man, if you want to go big, it’s going to be costly’ … and we learned enough around each other. So I branched out independently with big personalities like Glen Lewis, which has led to our success today”.

No hard feelings with Metro FM

Despite being very vocal about Metro FM at the TouchHD launch event, Touch says there are no hard feelings between them. “Metro will always be my family, because I’ll tell you why; if it wasn’t for the station, I wouldn’t be where I am… I have never said anything with meaning to the station, it has always been tongue in cheek. Even at my resignation I had no animosity; I was clear that I don’t want to catch up when digital media breaks out in the market and I had the opportunity to work for a company for 13 years. I can’t, I have an entrepreneurial spirit, I had to seize the moment and the time was right. There were certain things I wanted to do with Metro and couldn’t so the best way was to say well while the fruits are ripe, let me take the seeds and plant another tree somewhere else”.

In the next seven days, TouchHD will announce the signing of one of the biggest radio names in the country. Let the speculation begin and watch this space for who will be joining the TouchHD family.