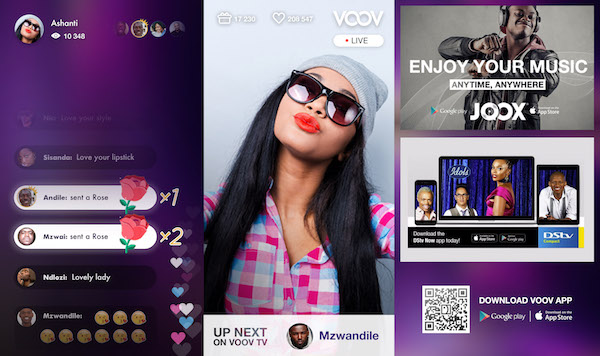 South Africa’s live streaming community is not as advanced as some international markets. But that could change with a new development.

DStv has expanded its mobile live streaming platform VOOV, creating a television channel around it. “It is the next logical step to bring this to a wider audience and to bring DStv customers the next wave in digital entertainment,” VOOV said in a statement.

The primary reason for the extension is around mobile data costs. “South Africa ranks second globally in video consumption on smart phones – by 2020, mobile video will account for 73% of mobile data traffic. However, data costs are still high – offering VOOV on TV gives audiences the chance to interact in a live environment without having to use their data to access the app,” VOOV added.

Currently only VOOV ambassadors are featured on VOOV TV, with 10-minute segments from 5-8pm every day. Viewers can interact with these streamers via the app through comments and virtual gifts that will appear on TV. Outside of the three hours, the channel plays a repeat loop of the live streams.

To protect the channel from controversial or unethical content (remember the problems that Facebook had with murders being live streamed on Facebook Live) VOOV has a customer-build moderation content management system, which ensures DStv customers won’t be subjected to abusive behaviour. “A 24/7 moderation team is in place, watching the streams and acting upon any incidents reported by viewers immediately,” the company said.

In due course, the channel will feature ordinary South Africans live streaming. “This is a great platform to help aspiring stars find a voice and an audience; and for discovering the next big star,” it said.

The channel also fits in with the evolving viewing habits of DStv customers. “We’re catering for audiences who have tech as an innate part of their lives, and who are accustomed to using multiple connected devices. These DStv customers and potential VOOV viewers consume television in a different way – they want to interact live and participate in what they are watching. The VOOV TV format fits perfectly into their world,” VOOV explained.

VOOV on mobile was launched in SA in July of this year, allowing users the opportunity to live stream themselves to other VOOVers using the app. VOOV TV can now be viewed on channel 196 on the Premium, Compact Plus, Compact, Family, Access and EasyView packages. VOOV is part of Tencent, which is part of the Naspers Group.