The ANC and social media factionalism 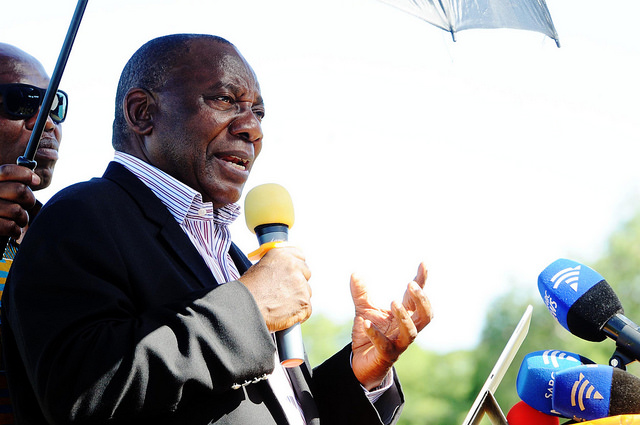 As the December conference draws closer, coverage of the ANC, and its presidential candidates, is noticeably increasing on social media, making for some interesting social media date observations. There is a distinct lack of active communication between the party and the general public, and looking at conversation peaks in October – in particular the recent cabinet reshuffle that saw the SACP’s Blade Nzimande’s removal as higher education minister – one wonders if this could perhaps be one of the key turning points in the ongoing race for the top party seat.

WordStart and Crimson Hexagon took a look at how the cabinet reshuffle was received by the public on social media and other digital platforms, and compared October commentary to other high points from June to date. The overall social media sentiment reveals the public’s perception that the recent reshuffle by President Jacob Zuma was meant to strengthen his hand, by removing his critics and securing top parliamentary seats for his allies, in an attempt to influence the outcome of the party’s December electoral conference.

Blade Nzimande’s removal is viewed in negative light on social media, and other influential news platforms. Political analyst on News24, Mpumelelo Mkhabela writes that the reshuffle serves two objectives for the president which are “to guarantee his personal political survival, and ensure the long-term sustainability of illegal dealings to siphon public funds”. Social media data shows that Mkhabela’s article was among the most influential, and most shared articles, on 18 October – the day after the reshuffle announcement.

There were a total of 918 social media and digital news mentions that focused on the race to the ANC Presidency on 17 and 18 October. Most of these were about the cabinet reshuffle, and many revealed a negative sentiment towards the ANC, and the President. In the overall posts for that period, and topic, 46% show a negative sentiment, followed by 49% neutral mentions, and about 5% that show a positive sentiment. 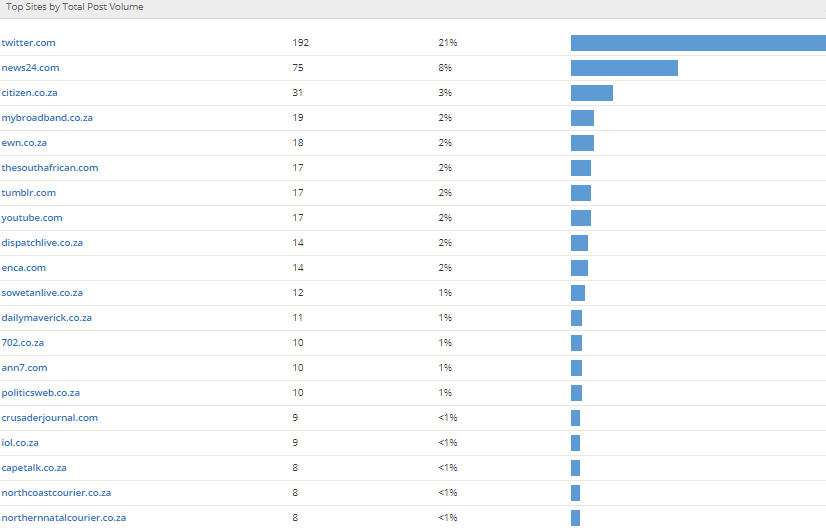 Above top 20 sites with the most mentions: Data made available by Crimson Hexagon to WordStart

Cyril Ramaphosa and Nkosazana Dlamini Zuma received multiple social media mentions during and after the reshuffle, as this change of ANC MPs is seen by the public to have a bearing on party leadership after the ANC elective conference in December. Thursday also saw Deputy President Cyril Ramaphosa answer some tough questions in parliament, which also increased the mentions of possible presidency.

After what seemed a fairly quiet campaign according to social, and digital news media data, Lindiwe Sisulu received more mentions this month following scathing comments that she made against ANC Secretary General Gwede Mantashe. The Daily Dispatch quotes Sisulu as having accused the general secretary of using his position “to the advantage of his friends” by reportedly endorsing Cyril Ramaphosa to become the next party president.

Chief whip of the ANC, Jackson Mthembu took to Twitter to address Sisulu’s comments, which further generated conversation on social media about her run for party presidency. In the tweet that generated 174 retweets and 79 comments, Mthembu spoke publicly about his disappointment at what he refers to as, “no respect for those who fought apartheid without the cushion of exile life.”

@LindiweSisuluSA' has showed her political immarturity by asserting that SAs freedom is owed to the exiles . She has lost her marbels !!

At the time of writing, there were 376 mentions focused on Lindiwe Sisulu, which is a little under five % of the total ANC related social media, and digital news comments. Unlike the previous month, where we saw Nkosazana Dlamini-Zuma, Cyril Ramaphosa, and Makhosi Khoza dominating social media timelines, Lindiwe Sisulu and Zweli Mkhize are slowly increasing their presence across various parts of the social web.

ANC mentions this month were predominantly about the presidential race, the cabinet reshuffle, the OR Tambo statue, and the dismissal of President Jacob Zuma’s appeal by the Supreme Court of Appeal. The 7 524 social media posts, also included mentions of state capture and corruption, which became topical at both Cyril Ramaphosa’s parliamentary Q&A, and during ANC Treasurer, Zweli Mkhize’s address at Nelson Mandela University.

This month also saw increased mentions of ‘Charges against Zuma’ accounting for 635 mentions and generating international interest with Reuters being among the top influencers. The charges make up 8.7% of total mentions. 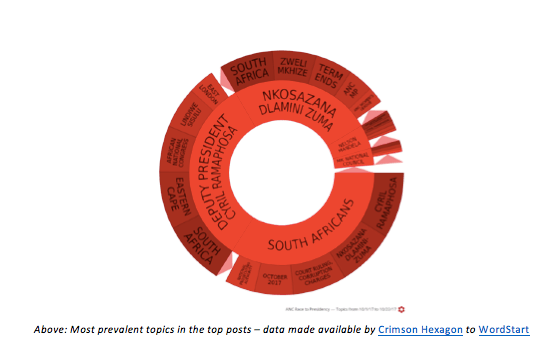 The race for ANC presidency seems to be generating a lot of buzz across South Africa’s social media sphere, but how do the 918 cabinet-reshuffle mentions measure-up against party mentions during the course of the year? The vote of no confidence against Jacob Zuma on 8 August for example, generated 3 606 mentions in a single day, followed by a further 1 487 posts the following day as people continued to discuss the voting process and the outcome. Ongoing conversations about the vote of no confidence against President Jacob Zuma kept South Africans engaged in analysis about a possible change in the ruling party. The collaborative nature of the topic, as one that was not mostly driven by ANC advocates, led to its widespread popularity across the social web – both locally and abroad.

Another notable example, is the ANC’s fifth National Policy Conference, which generated 914 mentions on the day that it began on 30 June 2017.

The most prevalent perception from the general public is that brand ANC is not united, and that even its top-ranking leaders do not seem to speak the same language. This causes more damage for the brand and increases social media factionalism. There is also increased competitiveness with presidential hopefuls speaking out more and provinces like Gauteng openly backing Cyril Ramaphosa for president. One of the opportunities is for the party to state its position on ongoing campaigns, and acknowledge that it’s business as usual (sort-of, under the circumstances). At this point, the perceived rift in the party leads to further confusion among members of the public and increases the social media share of voice by opposition parties on ANC issues. 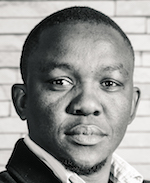 Mongezi Mtati founded WordStart to help companies generate buzz around their products and services among South African influencers. He is passionate about helping brands to connect the dots from social media, digital data and human interactions outside the web.