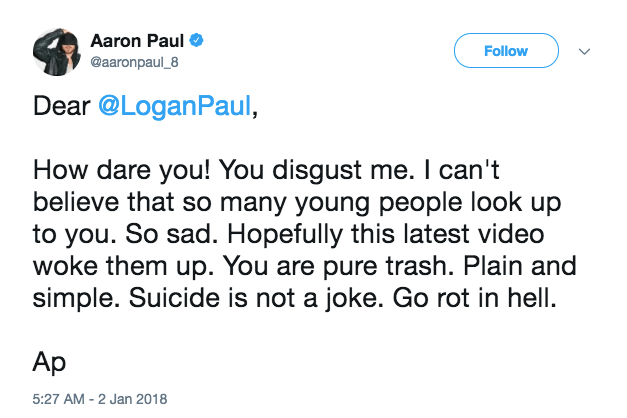 Is advertising on YouTube still a quality option considering your advert may appear in a video containing racism, discrimination, suicide or terrorism?

Popular YouTuber Logan Paul, who commands an audience of over 16 million subscribers and whose videos at minimum garner over five million views each, was lambasted recently after he posted a video of his visit to the Suicide Forest in Japan. The location wasn’t the problem with the video. It was the fact that the body of a suicide victim was shown and Paul’s behaviour around the incident was less than savoury.

Paul claims he was raising awareness about suicide, but fellow YouTubers and the general public lashed out at him, after which Paul issued an apology. This has been viewed over 48 million times.

His latest video, posted on 24 January, is definitely aimed at suicide awareness, but one has to wonder, is he only doing this now to save face?

YouTube’s reaction to the controversy was lukewarm at best. The company issued a statement stating, “Our hearts go out to the family of the person featured in the video. YouTube prohibits violent or gory content posted in a shocking, sensational or disrespectful manner. If a video is graphic, it can only remain on the site when supported by appropriate educational or documentary information and in some cases, it will be age-gated. We partner with safety groups such as the National Suicide Prevention Lifeline to provide educational resources that are incorporated in our YouTube Safety Center.”

The company also reiterated that it has a “safety team” in place which monitors for content that violates the site’s terms of use. Paul was punished by YouTube removing him as an official Google Preferred ad programme and his upcoming YouTube Red original video projects were shelved. But he is still on YouTube.

Not the first time

This is not the first instance of a YouTuber posting inappropriate content, although sometimes they do it accidentally. During a live stream of a popular video game, Pewdiepie, the most followed YouTuber on the platform (he has over 60 million subscribers) called another player the N-word. Before that, Pewdiepie was in trouble for posting content that labelled anti-Semitic after he posted a video showing two people from India holding up a sign.

The duo have a business on a website called Fiverr where they hold up customised signs and dance around, with the customer choosing the message on the sign. Pewdiepie chose the words “Death to all Jews”. Pewdiepie claimed he was showcasing how ridiculous Fiverr is and the things that people will do for money (including holding up signs with discriminatory messages on them), but he got in trouble nonetheless. Yet he is still on YouTube. According to YouTube, only multiple violations or a severe breach will lead to a user account being terminated.

Nic Newman of the Reuters Institute for the Study of Journalism comments, “YouTube themselves admit they could have done more. They could and should have done more. One of the reasons they didn’t, I suspect is that they are American companies with a very different approach to where the limits lie in free speech (especially around partisan and extreme opinions). This approach to free speech is enshrined in the US constitution but in Europe, by contrast, a very different line is often drawn.

Nic Newman, of the Reuters Institute for the Study of Journalism, comments, “YouTube themselves admit they could have done more. They could and should have done more. One of the reasons they didn’t, I suspect, is that they are American companies with a very different approach to where the limits lie in free speech (especially around partisan and extreme opinions). This approach to free speech is enshrined in the US constitution but in Europe, by contrast, a very different line is often drawn.

“I think the platforms are now realising that they need to take much more focus of local laws and customs and that involves in YouTube’s case employing 10,000 moderators worldwide by the spring. In combination with technology solutions they are at least trying to fix these issues but governments and others will hold them to account if they fail. This is a very different environment to the laissez-faire one that existed 18 months ago.”

Creators feel they have to push boundaries

A possible factor leading to so much unsavoury content is YouTube’s remuneration structure for content creators. Not only do they have to have a minimum number of subscribers before they are eligible to receive monetary compensation, they are also paid based on number of views.

What is the best way to increase views? For some, it is posting risqué or controversial content which gets people talking and sharing.

“That has been part of the problem with the internet much more widely. The algorithms and reward systems have promoted content that is popular rather than content that is valuable,” says Newman. “There is a backlash against this and change is on the way. Mark Zuckerberg talks about ‘meaningful interactions’ and time well spent and the trusted nature of a YouTuber ultimately will become more important in the reward systems there. To some extent this is already true – a number of YouTubers have crashed and burnt after they have ‘gone too far’ in some way. But in the future the algorithms that enable discovery or reward will reflect this”.

Measures are already being put in place. There is talk of delaying payment to YouTubers or those collecting advertising for a few weeks so that money might be withheld if there are complaints or negative reactions.

Another problem YouTube faces is that too many videos are being posted to the site every day. Unless content quality checks are automated, it is impossible to keep track of the nature of the content of all those videos. The site relies heavily on the Flag and Report features, which allows viewers to report videos that they believe have violated the terms of use.

So having seen all of this, the question remains, is advertising on YouTube still a quality option?

“The wider background of course is the heightened concern about the power and influence of tech platforms in general/fake news etc. Essentially much of this has been going on for years, but as the internet and social media takes up more of our time, advertisers need to use digital platforms to reach audiences,” explains Newman.

“In the short term, Google and advertisers have a problem, in the medium term Google and Facebook are working overtime to fix these issues and provide a safe environment for advertisers. There is a new focus this year on authority of content”.

This includes Facebook’s trust scores for brands and Google ramping up authority in their algorithms and demoting other content to make it less visible, trying to separate out content so when buying ads, there is a choice about what level of risk advertisers want to take.”

YouTube recently announced that it is investing $5 million in “more positive video content” in response to advertiser and public backlash. The money is going towards the site’s Creators for Change programme, which focuses on countering hate and promoting tolerance. Thirty-nine creators are part of the programme and they create videos on racism, the plight of refugees, and breaking stereotypes about Muslim women; all content aimed at promoting empathy and understanding.

With steps having already been taken, Newman’s takeout is a promising one for YouTube, Google and other digital players worried about the user-generated content on their channels. “Platforms have been far too slow to address this, but I believe the picture will look very different in six months’ time,” he says. Watch out for more changes and strategies which will hopefully ensure user-generated content on platforms heads in a positive direction.

When approached for comment on this story, Google (which owns YouTube) stated that no spokesperson was available, referring The Media Online to the site’s terms of use and policies located here and here.