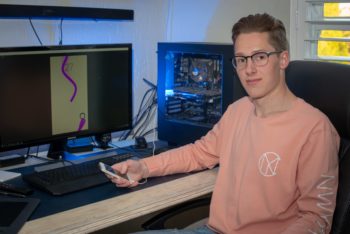 It is the first time a South African game has achieved such broad coverage on the App Store globally. It was picked as the Game of the Day, and showcased in 137 stores worldwide.

And more impressive than that is that Kynoch’s mobile game development is completely self-taught. He utilised free learning resources on the internet and computer science books that he bought on Amazon.

The Media Online chatted to Kynoch to find out more about Torus., his game development process, and what he hoped to achieve in future.

What is your game Torus. all about?

Torus. is an action/arcade mobile game, where the player has to tap on dots to connect them and progress. The players lose if they miss the dot. The objective is to score as high as possible. It is a very simple game, however it gets more challenging and exciting as the player gets further in the game.

How did you come up with the idea for the game?

After releasing Blast, which was my first published game and was in development for just under two years, I decided to focus on developing simpler games as they showed far more potential for success. The reason I say this is because the development time for a game like Torus., which took just three weeks to develop, is much shorter than for a game like Blast and therefore much more rewarding for me as the developer as I can release games more often.

The hardest part about developing small games is the initial step of coming up with a great, unique game idea.

I keep a list of ideas as I am continually thinking of new/unique things for my next games in my daily life. As soon as I come up with a new idea (no matter how vague or broad it is), I add it to my list. Many of my ideas are inspired by past experiences and what I see and think in my everyday life, whereas others are completely abstract like Torus.. I will then spend a lot of time refining these ideas and thinking of how I can turn them into enjoyable, successful games.

In the weeks leading up to the launch of Blast, I thought about my next game a lot, and this is when the idea for Torus. came about. 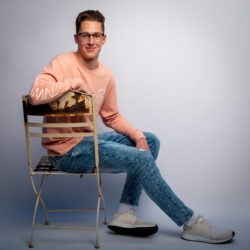 I had spent a lot of time thinking about what type of game and game mechanics I wanted. I decided that I wanted to build a very fast paced and extremely simple game. My initial idea was that the player had to launch rings onto dots, the player would die if the ring landed incorrectly or missed. This idea transformed into what is now Torus., an extremely fast paced and very exciting mobile game.

Why choose an interest/career in mobile game development?

I didn’t start developing mobile games for the sake of earning money, or to guarantee myself a job in this field one day. I develop games and learn game development for the fun of it, it is my passion. I have monetised my games in order to fund my game development and grow my studio.

That being said, there is definitely a lot of potential for mobile game developers. However, with over 20 million Apple developers there is also a lot of competition, and only the best developers will see the benefits of developing mobile games.

How much money can be made off of the development of mobile games and what does the revenue model look like, based on your experiences with Torus. and Blast?

Money can be made with game development. However, Torus. and Blast were not developed to make money as they are free downloads with limited in-app purchases.

Your thoughts on the state of the mobile gaming market in South Africa?

What for you is the appeal of mobile games? Why do people play them?

The appeal of mobile games for me, is that there is such a huge audience to enjoy them and the fact that they can be played very casually.

People enjoy playing mobile games because they are very casual and accessible. Almost everyone takes their phone everywhere and therefore has access to these mobile games wherever they go. A mobile game, especially one such as Torus., is a game that can be enjoyed over a 2-minute play session when commuting, waiting etc. In my opinion, it is this casual nature of mobile games that makes them so appealing and enjoyable.

Your message to your fellow youth?

This Youth Month, I would like to encourage the youth of South Africa to discover their passion and to follow it no matter what. I would also love to see young South Africans educating themselves and wanting to learn more and upskill themselves. Free learning resources for just about anything can be found through the internet, all you really need is a passion and a will to learn! I believe that having these two characteristics will take you very far in life.

What is next for you?

My main aspiration is to grow my one-man studio, Hard Graft Studios, into a triple A game development studio based in America. I also hope to explore other sectors of technology in the future.

I plan on releasing a few more games similar in scale to that of Torus. this year. The number of apps I will develop depends on how successful they are, what profits I can generate and, unfortunately, how busy school will keep me. I can develop a game similar to Torus. in a matter of weeks; the first release of Torus. was developed in just six days.